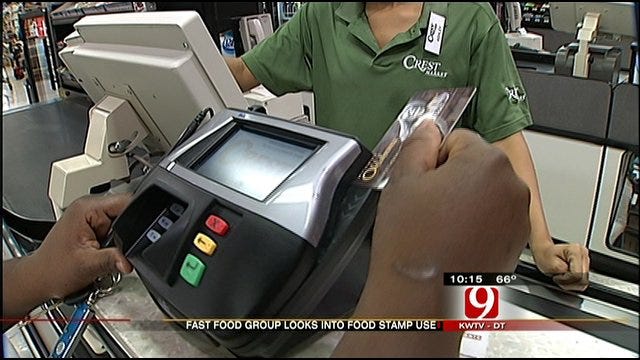 OKLAHOMA CITY -- The largest fast food conglomerate in the world is lobbying the federal and state governments to allow the use of food stamps at fast food locations, but the idea isn't sitting well with everyone.

The number of businesses across the country accepting food stamps grew by one-third in the past six years. If the National Restaurant Association has its way, the number will continue to rise with fast food, but members of the medical community say it could be dangerous.

"That would mess up everything," said one concerned person in downtown Oklahoma City Wednesday. "I just don't think restaurants should take food stamps."

"I don't see why not," said one supporter. "Food stamps should be able to be used anywhere."

The battle lines are clearly drawn, and there are plenty of pros and cons.

The USDA generally prohibits food stamps from being used on prepared foods, but made an exception about four decades ago for the homeless, elderly and disabled who may not be able to cook their own meals.

Wright is in charge of food stamps in Oklahoma. Currently, restaurants are off limits to all food stamp recipients in state. Wright says healthy eating is a priority, but she still sees benefits to bringing restaurants on board.

"I can say I would not rule it out," said Wright. "If you can go to a restaurant and buy a healthy sandwich, then, I would want to look into that for our recipients."

Wright says a change in Oklahoma would not mean an increase in food stamp funding, but nation-wide funding increased more than $36 billion over the past six years as more states allowed more restaurants to accept the stamps.

So far, only four states have made the change to accept restaurants into their programs. Wright says she plans on looking at programs in other states to see if it would be a good fit for Oklahoma.

Rhode Island could soon be the next state to allow restaurants to accept food stamps. Wright says she plans on working with her counterpart in Rhode Island to learn more about the change.

The USDA must approve an application from each state that decides to add restaurants to their programs.