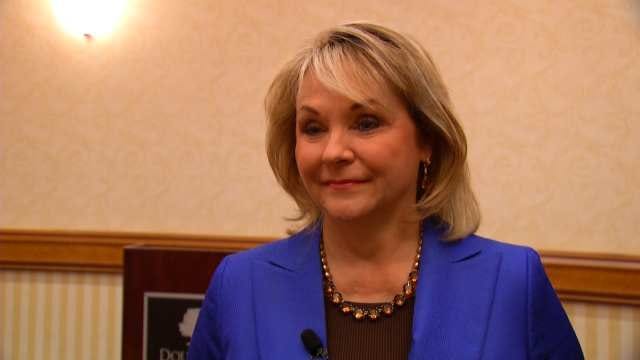 Oklahoma Gov. Mary Fallin signed a bill Thursday that will replace the Common Core State Standards in English and math with academic standards to be designed by the state.

The passing of the bill directs the State Board of Education to create new, more rigorous standards by August 2016, a news release says.

This is the first time in state history the State Regents for Higher Education, the State Board of Career and Technology Education and the Oklahoma Department of Commerce will be asked to formally evaluate the standards to determine they are "college and career ready."

The release says that while the new standards are being written, the standards for English and math will revert to the Oklahoma Priority Academic Student Skills that were used from 2003 to 2010.

"We are capable of developing our own Oklahoma academic standards that will be better than Common Core. Now is the time for Oklahomans – parents, citizens, educators, employers and elected officials – to unite behind the common goal of improving our schools. That begins with doing the hard work of building new, more rigorous Oklahoma standards.

"All Oklahomans want our children to get a quality education and to live the American Dream. To ensure our children have that opportunity, Oklahoma – and every state—must raise the bar for education standards so that our children can compete worldwide.

"Common Core was created with that well-intentioned goal in mind. It was intended to develop a set of high standards in classrooms across the nation that would ensure children graduated from high school prepared for college and a career in an increasingly competitive workforce. It was originally designed as a state-lead – not federal – initiative that each state could choose to voluntarily adopt.

"Unfortunately, federal overreach has tainted Common Core. President Obama and Washington bureaucrats have usurped Common Core in an attempt to influence state education standards. The results are predictable. What should have been a bipartisan policy is now widely regarded as the president's plan to establish federal control of curricula, testing and teaching strategies.

"We cannot ignore the widespread concern of citizens, parents, educators and legislators who have expressed fear that adopting Common Core gives up local control of Oklahoma's public schools. The words ‘Common Core' in Oklahoma are now so divisive that they have become a distraction that interferes with our mission of providing the best education possible for our children. If we are going to improve our standards in the classroom, now is the time to get to work.

"For that reason I am signing HB 3399 to repeal and replace Common Core with Oklahoma designed and implemented education standards. I am committed, now more than ever, to ensuring these standards are rigorous. They must raise the bar – beyond what Common Core offers – on what we expect of our students. Above all, they must be developed with the goal of teaching children to think critically and creatively and to complete high school with the knowledge they need to succeed in college and in the workforce. I also ‘get it' that Oklahoma standards must be exceptional, so when businesses and military families move to Oklahoma they can rest assured knowing their children will get a great education.

"The process of developing new, higher standards will not take place overnight, nor will it be easy. It will require hard work and collaboration between parents, educators, employers and lawmakers. Developing these standards is worth the effort; because our children's education is that important to our state. Their futures, as well as Oklahoma's future prosperity, depend on our ability to write and implement education standards that will prepare our children for success. I know Oklahoma is up to that challenge.

"My thanks go out to the educators and schools that have already worked hard to raise expectations and standards for our children. I know they will continue to build on those efforts as we move forward together as a state."

Tulsa Public Schools Superintendent, Keith Ballard released a statement saying, "Whether or not to move forward with Common Core has been a very difficult issue for our state. People have had very strong public feelings on it, and that has to be taken into consideration. It has been a very polarizing topic and there have been strong sentiments on both sides of the issue. I would encourage the governor and the secretary of education to start on new state standards. We know our state needs higher educational standards."

"Gov. Fallin's decision to sign HB 3399 into law is a massive disappointment to the educators, administrators and business leaders who have fought for years to ensure that Oklahoma's students reap the benefits of internationally-benchmarked but locally-controlled academic standards. Gov. Fallin and the Oklahoma Legislature have reneged on their promise to Oklahoma's students, bending to political hysteria at the expense of our children and the quality of our future workforce.

"The unintended consequences of this bill are frightening. By endangering Oklahoma's exemption to No Child Left Behind, Oklahoma's schools could lose control of millions of dollars in federal funding and be subject to additional federal oversight. The bill also subjects our students' education to future political whims without input from parents or educators."

State Superintendent Janet Barresi said the Department of Education is, "ready to hit the ground running on creating new and better standards," in her statement.

"The signing of House Bill 3399 marks an opportunity to move forward and work to ensure that Oklahoma has the strongest academic standards possible — standards that reflect Oklahoma values and excellence. We must improve academic rigor. At one time, as it was emerging from Republican and conservative ideas from individual states, I did support Common Core. As it has become entangled with federal government, however, Common Core has become too difficult and inflexible.

"The Oklahoma State Department of Education is ready to hit the ground running on creating new and better standards for math and language arts. The process will be inclusive and thorough, and the result will be the best possible academic standards by 2016. It will be a fully transparent and highly collaborative process, one that encompasses Oklahoma parents and communities as well as Oklahomans from a spectrum of fields and representing a wide range of expertise. Our young people deserve nothing short of the very best standards."

Tulsa Police Searching For 2 Pursuit Suspects, 1 Other In Custody

News On 6 Tulsa Police are searching for two suspects after a pursuit on Monday.
View More Stories