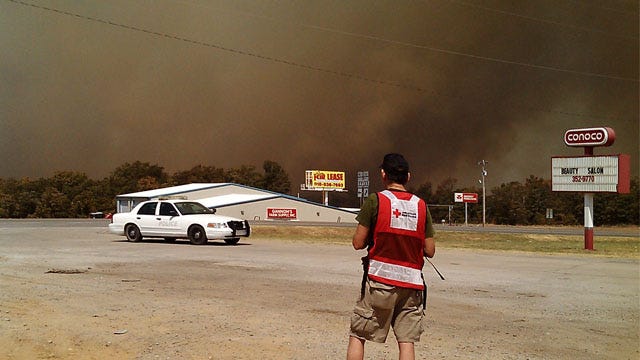 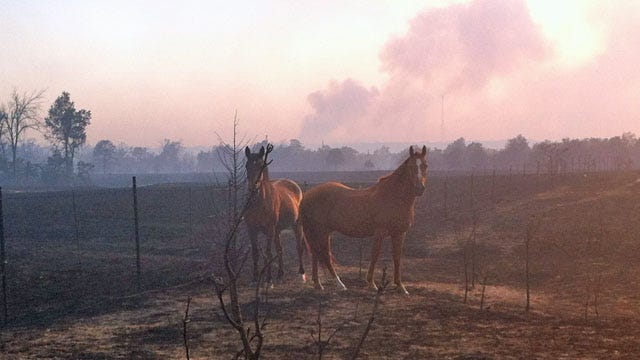 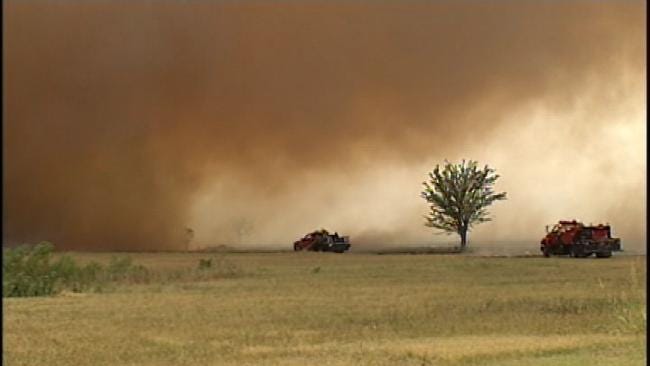 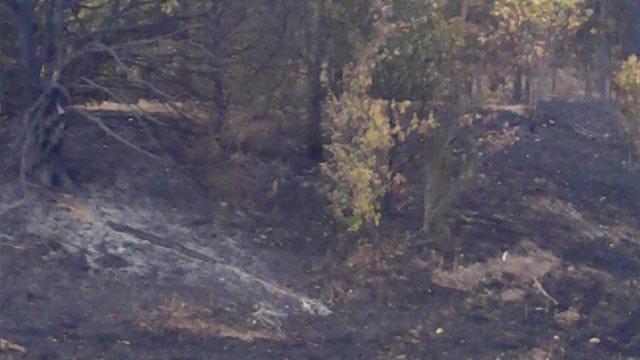 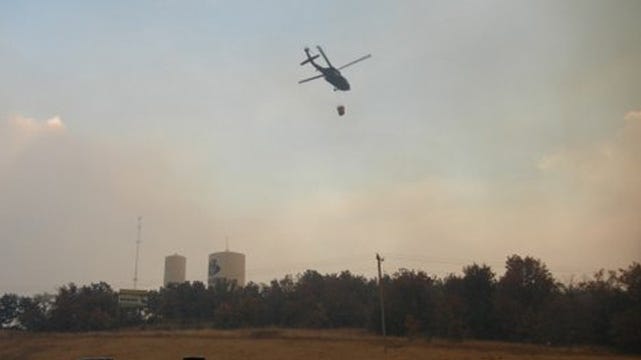 The evacuations of Mannford, Drumright, Oak Grove and Jennings are over. Residents should use caution while returning to the areas. Mannford Police Department reports that there have been no losses within the city limits, police say.

Firefighters in Creek County continue to battle hot spots and fight to get fires contained before the winds pick up Sunday. Aerial drops from Oklahoma National Guard also continue.

Firefighters in Pawnee County are watching for re-igniting embers and say they have no active fires on Sunday.

At 7:15 p.m. Saturday, officials in Jennings ordered mandatory evacuations for the Jennings township, west and north of Jennings and parts of the Hallett area.

At 8:00 p.m., the small community of Oak Grove was being evacuated.

Also at about 8:00 p.m., our reporter on the scene was told that Black Hawk helicopters carrying water had saved the Mannford Post Office.

Our crew sat in the parking lot of the IGA in Mannford and saw huge flames burning through town around 8:30 p.m. Flames also flared up to the east.

Power outages have been reported throughout the Mannford area due to the fire. A spokesman for the Grand River Dam Authority said the main line feeding Mannford has been damaged, and GRDA is not sure how long that outage will last. GRDA crews are working to get generators to the city to be used at the water plant.

It was also reported that the Sands Springs water plant had no power around 9:00 p.m.

Westbound lanes of the Turner Turnpike (Bristow gate to Tulsa gate) were closed for about two hours Saturday afternoon due to blowing smoke. They have re-opened, but officials said if wind directions change, it will close again.

The westbound Creek Turnpike entrance to Interstate 44 remains closed as of 6 p.m. Saturday.

The emergency management command post has been moved back to Highways 48 and 33 as the fire has passed that area.

Civil defense authorities say 21 agencies have been battling the fires overnight Friday. Now there are a reported 40 agencies working to put out the fire.

"There were quite a few structures that got burned last night," said Creek County Commissioner Newt Stephens at the media briefing.

"The firemen got in there and fought as hard as they could," he said. "We're glad that the evacuations come through, and we got everybody out. Public safety is most important."

As of late Saturday afternoon, officials reported that about 30 structures in Creek County had been destroyed by fire.

Stephens said they believe the fire was man-made, possibly as a result of burning brush. They also believe it started on Creek Nation tribal land and have turned over the investigation to the Creek Nation and the Lighthorse Police, he told News On 6 reporter Tess Maune.

Stephens urged residents and "gawkers" to stay away from the area. His greatest fear on Saturday was that a change in wind direction or gusting winds would change the direction of the wildfire.

"I know everyone wants to get in and check things out, but until we get it under control it's just not safe," he said.

About 50,000 acres have been affected by the fire, Stephens said, in a path about 6 miles wide by 13 miles deep. Stephens said the perimeter of the fire is from State Highway 16 just past Highway 51 and from Highway 48 to Highway 99.

Stephens said the wildfires had affected about 78 square miles as of Saturday morning.

"The largest wildfire I know of in Creek County," he said. Stephens said firefighters believe they can contain the wildfire before it crosses the Cimarron River.

The Oklahoma National Guard is helping with water drops from helicopters Saturday.

Anyone who has sustained losses in the fire is asked to report those losses to the Red Cross shelter in Sand Springs.

Saturday afternoon at 4 p.m., the shelter in Mannford was evacuated due to fire danger.

Thirty-eight people slept at the Mannford shelter Friday night, according to Donita Quesnel with the Tulsa Red Cross.

The Bristow shelter was closed late Saturday morning, and supplies were relocated to the Mannford location.

Also, the Dennis R. Neill Equality Center at 621 East 4th Street in Tulsa is open Saturday evening to accept evacuees. They are a regular cooling station, so they are already equipped with the necessities. They said they will also accept pets.
Emergency crews are still getting a handle on exactly how much has been lost. They are asking people to report their losses at any of the Red Cross shelter locations.
The Red Cross said Saturday night that the Salvation Army Area Command at 924 South Hudson Avenue  in Tulsa will be accepting donations of water and hydrating beverages from 9 a.m. to 3 p.m.

Keep checking back to NewsOn6.com for updates as more information is confirmed.