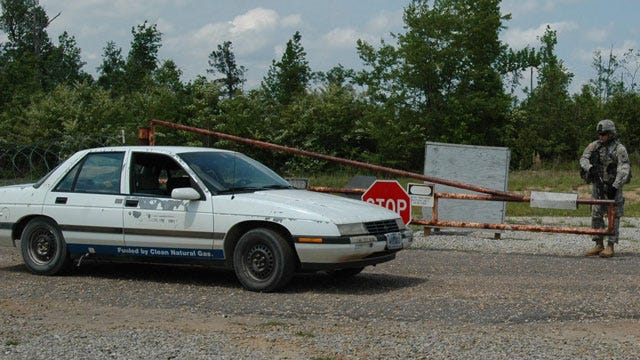 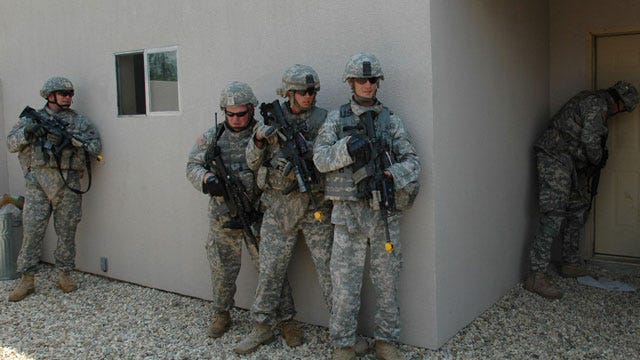 CAMP SHELBY, Miss -- Counterinsurgency mission training begins prior to mobilization to Afghanistan and continues throughout the mobilization process.

The soldiers of the 2-305th FA BN created a counterinsurgency situational training exercise, which covered base security, COIN operations, biometrics, and key leader engagements. They are taught to gather information, analyze intelligence, and use devices to positively identify the local population.

1st Lt. Preston Settle, 2-305th FA BN, A Battery, officer-in-charge, explained, "A soldier must understand how to collect information from an area in order to shape what actions they take on the battlefield. This is the COIN mindset."

Soldiers learn to collect information in various ways, including engagements with village elders or government officials, or just talking with locals. After the information is gathered and analyzed, a commander can make sound decisions about the actions his unit will take. Building a relationship with the local population helps the unit eliminating the enemy's hold in that area.

After the unit completes the first phase of the training, they receive an order to occupy an area and conduct counterinsurgency operations. During this phase of training, the unit must run their own command post and their entry control points, conduct patrols, and set meetings with locals in a nearby village.

Soldiers use these encounters with the locals to gather information about the location of a high-value in their area of responsibility. If the unit successfully analyzes the intelligence they gathered, the operation will end with the apprehension of a member of the Taliban.

First Army Division East units designed the COIN STX at Camp Shelby to be as realistic as possible. The mock villages have been designed after villages in Afghanistan. They are filled with cultural role players and individuals who speak Dari and Pashto.

At meetings with village leaders, soldiers must use interpreters to communicate, and they are offered traditional Afghan chai tea and flatbread. During these engagements it is imperative that soldiers understand Afghan customs and courtesies so they do not offend a potential ally.

Spc. Nicholas Barrick, a medic assigned to 45th IBCT's 180th Cavalry Regiment, thought the COIN training was realistic and relevant not only to the mission but to his individual job skills as well.

"It all went crazy… the [entry control point] blew up and there were incoming rounds," said Barrick. "People were running everywhere and shouting for a medic. It was realistic. Even though there were no real casualties, I still had to use my training as a medic."

Counterinsurgency training is an essential building block of missions military members face overseas. It is imperative that they develop the skills necessary to gather and analyze intelligence, then make proper informed decisions on how to proceed with their mission.

Using first-hand experiences from deployments, members of the 2-305th FA BN have developed a training model that is realistic and relevant to what servicemembers will face during a deployment.

The 177th Armored Brigade trains, coaches and mentors soldiers, airmen and sailors in support of our nation's overseas contingency operations.

The majority of the work at the 177th is with mobilized Army reserve component forces, although they also train active forces.

The brigade is stationed at Camp Shelby Joint Forces Training Center at Camp Shelby, Miss., which is the largest and most active mobilization training center in the U.S. Army.