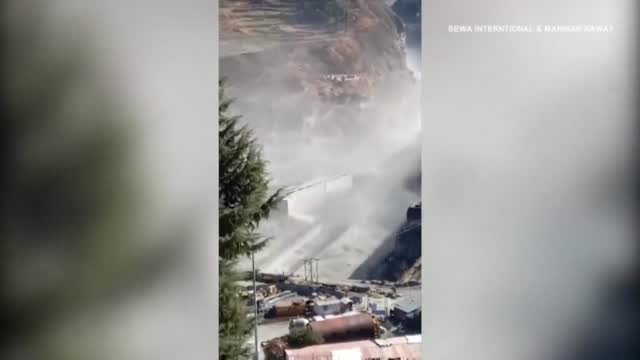 Almost 30 people were confirmed dead and nearly 200 more still missing on Monday after a huge chunk of a Himalayan glacier in northern India's Uttarakhand state broke off and fell into a river, triggering an avalanche and a massive deluge that washed away dams, hydroelectric power plants and several bridges and roads.

Most of the missing were believed to have been washed away from two hydroelectric power stations hit along the Dhauli Ganga river. About 150 people who were working on a large, under-construction power plant, and 21 more from the Rishiganga facility further upstream were missing.

The Rishaganga power station was operating when it was completely destroyed by the wall of water unleashed by the Nanda Devi glacier's partial collapse on Sunday.

There was a frantic rescue operation underway to reach more than 30 people trapped in a 1.5-mile-long tunnel at one of the facilities, where mud and debris were making the operation difficult.

"Some people inside the tunnel are probably alive or half alive, we are trying to rescue them," Uttarakhand state's Director General of Police Ashok Kumar told CBS News.

Kumar confirmed to CBS News that the bodies of 26 people had been recovered. He said rescue operations would likely continue at least through Tuesday morning.

Hundreds of paramilitary soldiers and police were sent in to help with the rescue operations. Video from the scene showed heavy construction equipment shifting mud and military helicopters circling above teams on the ground. At least 25 people had been rescued as of Monday afternoon local time, including one man seen being pulled out of a tunnel covered in mud.

Authorities evacuated thousands of people from several villages close to another affected river, the Alaknanda, but authorities said on Monday that the flood threat was over. Food was being air dropped onto areas that were cut off by road due when the floodwater washed away bridges and roads.

"India stands with Uttarakhand and the nation prays for everyone's safety," Indian Prime Minister Narendra Modi wrote on Twitter. He said he was "constantly monitoring the situation."

Climate change in a delicate region

Uttarakhand state sits along the western Himalayan mountains and has seen several flash floods and landslides in the past. More than 6,000 people were killed, left missing or presumed dead in 2013 when heavy monsoon rains triggered massive flooding.

Environmentalists have long raised concerns over large dams being built on the state's rivers and campaigned against development on its flood plains.

Experts were quick to say that the partial collapse of the glacier on Sunday could be linked to climate change.

"This looks very much like a climate change event as the glaciers are melting due to global warming," said Dr. Anjal Prakash, a lead researcher with the United Nation's Intergovernmental Panel on Climate Change (IPCC). He told CBS News that the impact of global warming on glaciers was well documented and that a recent report showed temperatures were rising in the Himalayan region.

"There is no doubt that global warming has resulted in the warming of the region," said Dr. Farooq Azam, a professor of glaciology and hydrology. "Climate change-driven erratic weather patterns like increased snowfall and rainfall [and] warmer winters have led to the melting point of a lot of snow."