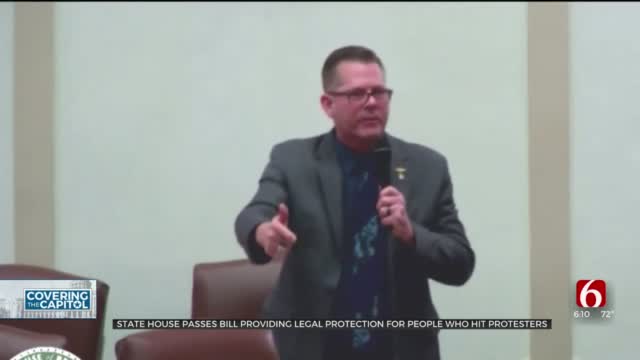 A bill that would give drivers fleeing a riot legal cover for hitting or running over protestors in the road passed the state House of Representatives during the early morning hours Tuesday, the vote coming after a marathon lawmaking session.

“We don’t allow riots. We allow peaceful protest and just because somebody got hurt somewhere else doesn’t mean that I have the right to hurt or impede the freedoms of others,” Rep. Kevin McDugle, R-Broken Arrow, argued on the House floor.

“I'm not saying they have a right to block the road,” Rep. John Waldron, D-Tulsa said. “Our solution is draconian. We are going to permit people to run over their fellow citizens. Is this who we are as a state, Oklahoma?”

Lawmakers passed HB1674 along party lines. The bill by Rep. Kevin West, R-Moore, would remove civil and criminal liability for drivers who unintentionally cause injury or death to an individual while fleeing a riot. The measure requires the driver exercise “due care" in escaping the situation.

“We put that in there specifically because we don't want people just going around and running into people and backing up over them or anything like that it still has a lot of responsibility on the person in the vehicle as well,” West said.

“It could almost give people, just by saying they felt like they were threatened for their life, it would give them the ability to cause harm and face no repercussions,” Dollens said.

On the timing of the past-midnight vote, West said members have no control over when bills come up. The body voted 70-6 to suspend House rules to stay in session past midnight.

“The majority of members wanted to go ahead and get it taken care of last night so that was the process that we took,” West said.

The bill passed 79 to 18 along party lines and is now eligible to be heard in the Senate.

“Passing law like this does nothing but create more political division,” Dollens said. “It's grandstanding.”