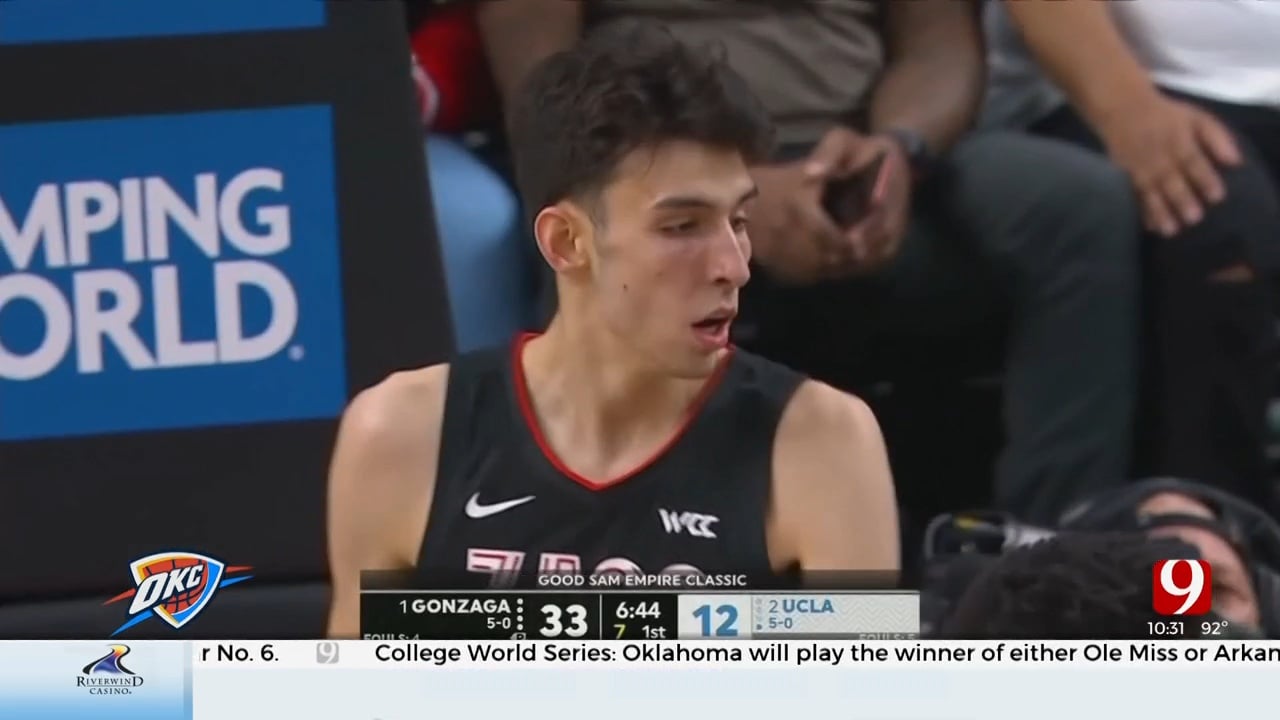 With the No. 2 overall pick in the 2022 NBA Draft on Thursday the Oklahoma City Thunder selected Chet Holmgren, a 7-foot stretch big with guard skills and potentially game-changing defensive ability.

One of college basketball's most dominant two-way stars during his lone season at Gonzaga, Holmgren joins budding superstar Shai Gilgeous-Alexander and 2021 No. 6 overall pick Josh Giddey as the core of a Thunder franchise that remains stocked with future draft capital just waiting to be cashed in.

CBS Sports Gary Parrish gives the Thunder's pick an A+.

The concerns about Holmgren's slight frame are legitimate -- but he's such a unique prospect with incredible potential that he's the right pick here. This 7-foot rim-protector who can also bounce it like a guard and reliably make 3-pointers. He has the highest ceiling in this draft and, for that reason, should go no lower than here.

Holmgren profiles as an elite rim protector and shot-changer in the paint; many really smart analysts talk about Holmgren's instincts on the defensive end as "off the charts." Holmgren has been compared to Pau Gasol, or even Rudy Gobert with perimeter skills, by Kevin O'Connor of The Ringer. That's pretty high praise.

Offensively, Holmgren's ability to stretch the floor as a shooter is a perfect complement for Gilgeous-Alexander, who is one of the most aggressive drivers in the league and becomes almost impossible to keep out of the paint on a spaced floor.

Meanwhile, Giddey, who isn't a great shooter but is a special passer, now has a 7-foot shooting target for his sixth-sense reads and more space to operate as a playmaker.

There is, of course, some doubt as to whether Holmgren will live up to the hype. His slender frame is where most of the doubt begins and ends. Can he hold up to the physical toll of the NBA? Everyone will cite the fact that scouts voiced similar concerns about Kevin Durant when he was coming out of college, and indeed the NBA has become much more about skill than physicality. But that doesn't mean Holmgren's career will play out the same way. For one, he's not nearly as skilled as Durant. Not even close. Nobody is at that size.

Here's what CBS Sports senior writer Matt Norlander had to say about Holmgren, whom he ultimately projects as a good-but-not-great player:

I think it's more than reasonable to project at least one of the big three (Jabari Smith, Paolo Banchero and Holmgren) to not be a top-five player in this class by the time we look up in 2030 and take stock of all that's happened. Since Holmgren's still dogged by questions about his frame and shelf life as a durable presence, I'll pick him to be the worst of the three. I don't question his work ethic or love for the game at all. I can't wait to see him in the NBA, but I think he winds up as a good, but a bit inconsistent, modern stretch-center.

As Norlander says, Holmgren's floor still appears to be pretty high. He's going to be a good player. Seven-footers who can shoot and protect the rim are always going to be highly valuable. The question is whether Holmgren tops out as a valuable rotation player or a legit franchise cornerstone. OKC is betting on the latter.

Ousmane Dieng was selected by the Knicks with the 11th pick in the 2022 NBA Draft and subsequently traded to the Thunder for three conditional first-round picks, Adrian Wojnarowski of ESPN reports.

Dieng was initially announced as the Knicks' selection, but it was quickly clarified that he'll, in fact, head to the Thunder, who reportedly gave up multiple first-rounders to move up and select the 19-year-old forward. Dieng spent last season with the New Zealand Breakers of the NBL Australia, where he posted 8.9 points, 3.2 rebounds, 1.1 assists and 0.9 combined steals/blocks in 20.3 minutes per game. He'll join Chet Holmgren, as well as No. 12 overall pick Jalen Williams, on a developing Thunder roster that continues to stockpile young talent. At some point, the Thunder will shift toward attempting to contend, but given the age of its core, OKC will likely be headed for another rebuilding season in 2022-23. With that in mind, Dieng should be able to carve out some opportunities off the bench, but he's ultimately viewed as a developmental prospect.

Jalen Williams was selected by the Thunder with the 12th overall pick in the 2022 NBA Draft.

Williams was named to the 2022 WCC All-Conference First Team following his junior season with Santa Clara. Though older than many other top prospects, Williams has shown upside as a perimeter shooter -- 44.3 percent on catch-and-shoot threes -- and his feel for the game will help him make an impact on and off the ball for an OKC team filled with young playmakers. He should have plenty of opportunities to develop his game for the rebuilding squad.

Jaylin Williams was selected by the Thunder with the 34th overall pick in the 2022 NBA Draft.

In a 2022 draft haul headlined by Chet Holmgren and Jalen Williams, Jaylin Williams joins a heady group. The sophomore from Arkansas led the nation in charges last season, while ranking 12th overall in defensive-rebounding rate. He averaging 10.9 points, 9.8 rebounds and 2.4 steals/blocks per game.

Gabe Brown signed a partially guaranteed deal with the Thunder and will play with the team in Summer League, Adam Zagoria of ZagsBlog.com reports.

After going unselected during Thursday's 2022 NBA Draft, Brown was quickly able to reach a deal with the Thunder. The 6-foot-8 forward averaged 11.6 points and 3.8 rebounds per game last season for Michigan State.