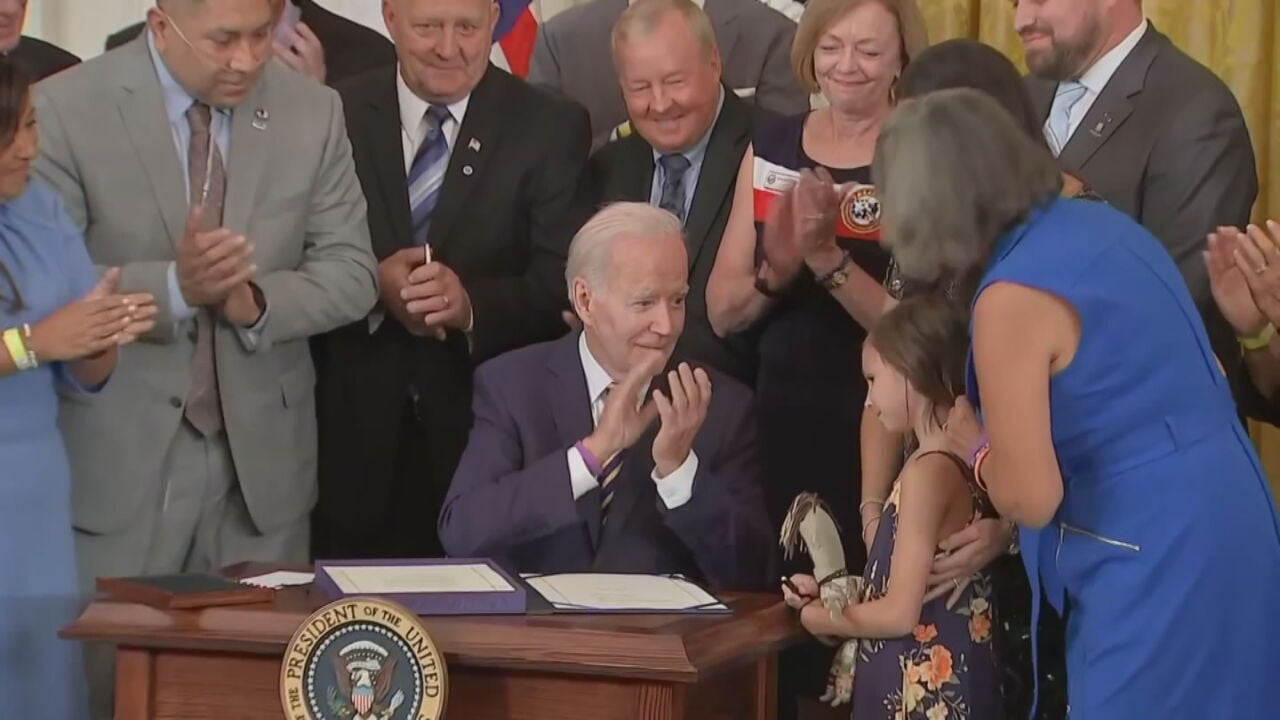 President Biden signed what he called long-overdue legislation Wednesday to extend VA health care services and benefits to millions of veterans, and families of veterans, who served at military bases where toxic smoke billowed from large “burn pits.”

Biden's own son Beau died of cancer years after deploying to Iraq.

The law caps a years-long effort to ensure treatment for chronic illnesses that veterans have blamed on burn pits and to provide death benefits to spouses of veterans whose illnesses took their lives.

Burn pits were used in Iraq, Afghanistan and other overseas locations until about ten years ago to dispose of chemicals, tires, plastics, medical equipment and human waste on military bases. It's estimated the number of affected troops is about 3.5 million.

"I'd like to thank every member of Congress who supported and voted for the PACT Act," said Sgt Robinson's widow Danielle Robinson at the White House signing ceremony Wednesday.

Robinson, with daughter Brielle standing at her side, said, "As a military spouse, when your loved one returns home safely from a deployment, you count your blessings...But ten years post-deployment from Iraq. My husband, Heath, began the biggest battle of his life: a terminal stage four lung cancer diagnosis due to toxic exposure from a burn pit in Baghdad."

"I think now I can grieve his loss," said Susan Zeier, Heath's mother-in-law, in an interview following the bill signing.

Zeier says she and the family have been too busy advocating for changes in the law to properly mourn her son-in-law's passing.

"Heath asked me to promise that I would continue telling his story in order to get the help out there to the other veterans who are sick and dying and being denied by the VA," Zeier related, "so, today this means I fulfilled my promise and Heath can rest in peace."

The Veterans Administration has reportedly denied about 70 percent of claims related to toxic burn pit exposure in Iraq and Afghanistan, generally because veterans have been unable to conclusively prove that their illnesses were service-related.

That changes under the PACT Act.

"They don’t have to fight anymore to prove that," said Elizabeth Beck, a Fort Worth, TX council member and veteran of Operation Iraqi Freedom who attended the signing ceremony.

"We smelled it, we felt it, every day," Beck said in an interview, describing her 2005 deployment to Taji, Iraq. "We saw the smoke billowing from the burn pit. We felt it in our breathing."

Beck says she has had her own exposure-related health issues and it's critically important that the law now presumes there is a connection between the illnesses she and other veterans are suffering from and the toxic fumes that were present wherever U.S. troops were deployed post-9/11.

Enacting this law shows, she says, that the president and all who voted for it "understand the true cost of war -- that it’s not just the lives that we lose during the battle, but it’s those that we lose coming home, whether that be to suicide or illness. So, this is just another step in making sure that we take care of those took care of us."

Sen. Lankford said it's precisely because of his support for veterans that he voted no. He believes the bill takes the science out of determining whether an illness is service-connected and that the expanded benefits will mean longer wait times for treatment for those veterans already qualified.

Officials with the Veterans Administration say they know this means more work for them -- more claims to review and more veterans to treat -- but say they have already begun taking actions to meet the increased demand.