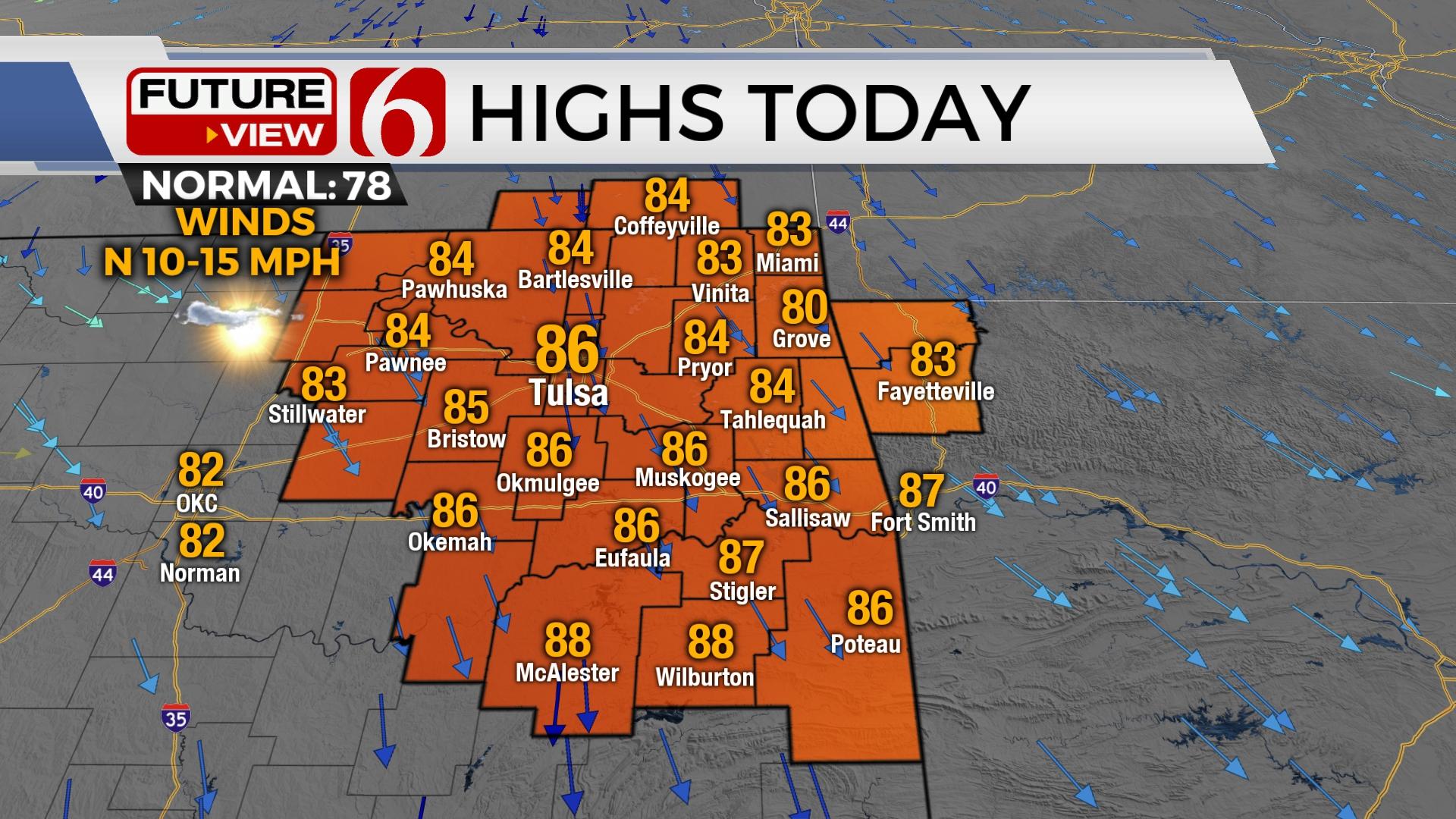 A mild day is ahead before a strong fall cold front arrives early Friday morning. We’ll expect one more relatively mild and warm day across Eastern Oklahoma as afternoon temperatures remain into the mid-80s. A few clouds will be nearby, but mostly sunny conditions will remain along with north winds at six to 15 mph. The fire spread rates will continue to be a concern with dry conditions and low humidity Thursday afternoon. Another strong fall cold front arrives early Friday morning with gusty north winds and cooler weather that should persist through the weekend. Most shower chances initially will remain west, but will slowly advance into eastern Oklahoma Sunday into early next week. A strong area of low pressure moves across southern Canada on Thursday into the upper Great Lakes area early Friday. A surface ridge of high pressure quickly develops across southern Canada and extends into northern sections of the country Friday. As this occurs, a cold front advances southward later today and tonight, reaching Northern Oklahoma early tomorrow morning. This brings gusty north winds at 15 to 30 mph for the first half of the day tomorrow, with wind speeds gradually easing some for the second half of the afternoon. Temperatures tomorrow morning will start in the 50s with afternoon highs in the upper 60s and lower 70s north, and upper 70s south. Friday night football will be cool. Kick off temperatures will be into the mid and upper 60s dropping into the lower 60s or even upper 50s in the valleys of eastern Oklahoma by 4th quarter. Saturday morning starts in the 40s across the north and lower 50s across southeastern sections. Afternoon highs Saturday should stay in the 60s north and a few 70s south with mostly to partly cloudy sky. There will be a chance for a few sprinkles or showers across the western half of Oklahoma on Saturday, possibly near Stillwater by kick-off for the Texas Tech, OSU game. Temps at the Cotton Bowl will be in the lower 70s for the OU and Texas reaching the upper 70s by the end of the game. Saturday evening into early Sunday, a weak system slowly advances eastward and will bring a few mentions for showers into part of Eastern Oklahoma Sunday, Monday and possibly Tuesday. South wind returns Sunday in advance of the next storm system. Gusty south winds are expected Monday and Tuesday with daytime highs in the lower 80s. A few scattered showers will be possible. Another strong fall front should arrive either Wednesday night or early Thursday morning of next week. This system may bring a better chance of widespread measurable precipitation across the eastern half of the state. Another cool down is anticipated behind this system.