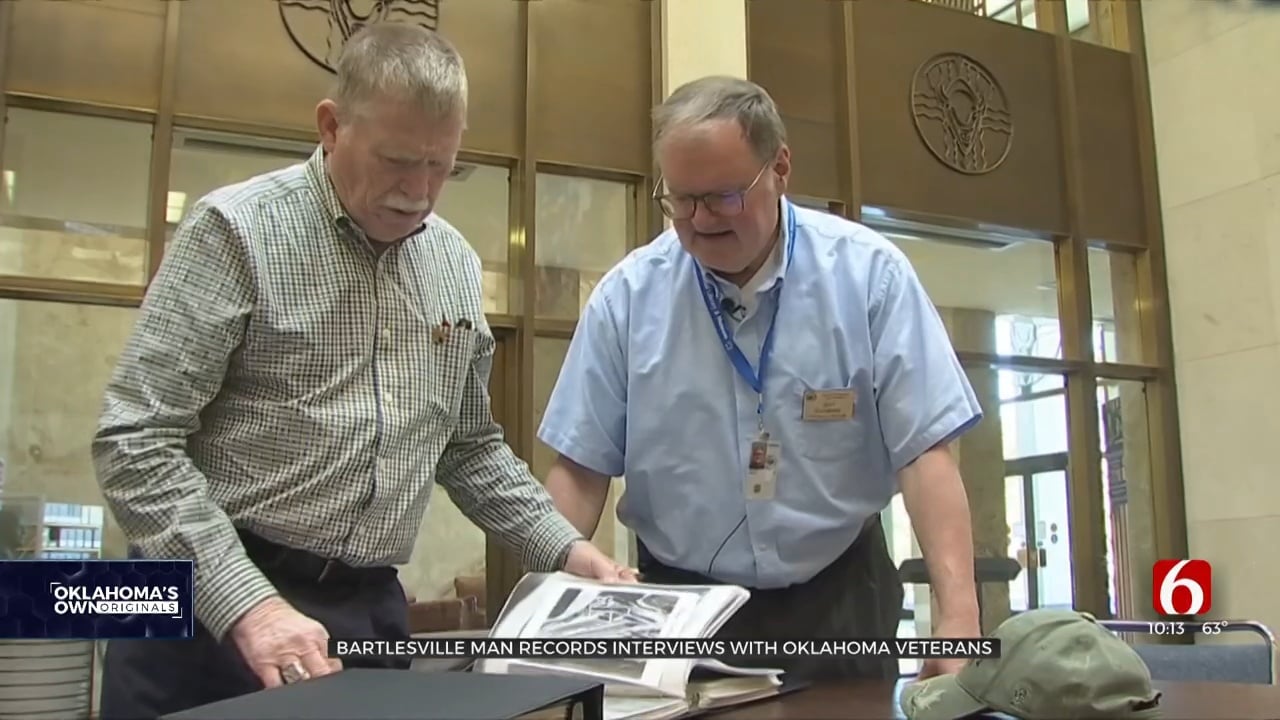 Hundreds of Oklahoma veterans' stories are being recorded thanks to a Bartlesville man who has spent two decades interviewing every veteran he can.

About 1,000 of his WWII interviews are stored at the Dwight D. Eisenhower Presidential Library.

"Someone had a radio; it was announced Japan had bombed Pearl Harbor. I had never heard of Pearl Harbor…Four and a half months later I was on the Hornet 400 miles off Japan and we were sitting with Jimmy Doolittle and his group getting ready to kick some butt,” WWII Navy veteran Willard Lyons said in a 2010 interview.

Lyons, who settled in Bartlesville after 20 years with the Navy, is one of hundreds of veterans Todd has interviewed.

Todd worked at the Oklahoma Historical Society at different points throughout the 70s, 80s and 90s. He worked as the oral historian during some of his time there. Just before retiring in 2001, Todd said he was in the archives and ran into a staff member visiting from the Eisenhower Presidential Library.

"He said, 'I'm frustrated. We're losing these WWII veterans, not getting their stories,'” Todd remembered.

That was the beginning of his relationship with the library, which is in Abilene, Kansas, where President Eisenhower grew up.

Hundreds of Todd’s interviews are stored in the stacks at the Eisenhower Library. The stacks extend several levels, and only a handful of people with the library are allowed inside for security reasons.

"The great thing about these interviews is you get to then document those individual efforts that became the entire war effort that became the American victory in WWII,” Supervisory Archivist Jim Ginther said.

Ginther is one of those few people who can go back in the stacks, to access materials for people who make appointments.

During our visit, Todd brought his latest contribution to the library: pictures he collected that go along with the veterans' memories. And while they each have their own story, Todd said there is a common theme.

His interviews with veterans from WWI, Vietnam, Korea, Desert Storm, and Afghanistan are stored at the Oklahoma Historical Society. Many are Oklahomans, but he'll meet someone just about anywhere, as long as they're willing to talk.

"There are a few that just flat will not be interviewed. I have tried and tried. And if they say they don't wanna be interviewed, I just back off,” he said.

But don't mistake that for a lack of persistence.

"There's only one I went after,” Todd said. “And he was trapped inside the USS Oklahoma. And I said, 'Your story is unique. We need your story.' And he said, 'I don't want to talk about it.' And I would call him about once a month. Finally he said, 'What would it take for you to leave me alone?' I said, 'Let me interview you.' And he said, 'Be here tomorrow.' So I drove to Fort Worth. Interviewed him and he said, 'Do not call me again,' and I said, 'Yes sir.'"

Perhaps one reason veterans are willing to share their war stories with Joe, is because he himself is a veteran. He joined the Army in 1966, was a helicopter mechanic in Vietnam, and helped protect civilians during Desert Storm.

He is still doing interviews, and thinks about the people he's already interviewed, often. He stays in touch with some of their families.

"Daddy was on the Hornet when it was attacked by the Japanese and he had to abandon ship,” Marjorie Lyons Smith said.

Lyons Smith is Willard's daughter. He died in 2018, years after Joe sat down with him.

"I didn't realize then how important it would be to me years later,” she said.

"It is the cliche, 'If we forget the past, we're damned to relive it,’” Todd said.

Joe was inducted in the Oklahoma Military Hall of Fame last week, in recognition for all his contributions.