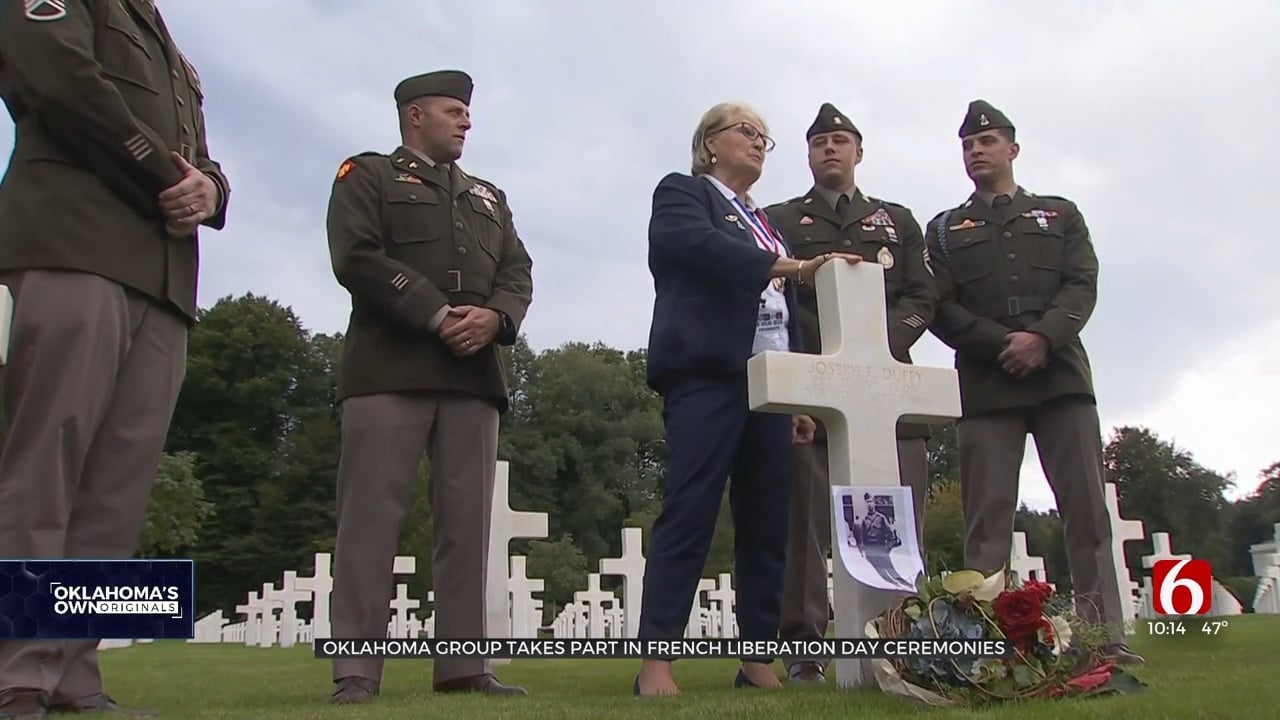 A group from Oklahoma’s 45th Infantry recently got the chance to take part in Liberation Day ceremonies in France. The division played a key role in liberating several French towns during World War II.

It can be hard to describe the feeling one gets when visiting the American Cemetery in Epinal, France.

"Absolute sacrifice, and sadness," are words that come to mind for Denise Neil, Executive Director of the 45th Infantry Museum in Oklahoma City.

Words can seem inadequate for the more than 5,000 Americans buried on the 48 acre site in the foothills of the Vosges Mountains in Eastern France.

These men died in campaigns across France and beyond into Germany.

"The emotions as you walk among these crosses, and these graves it's just overwhelming sometimes," Colonel Brad Carter said.

This group of Oklahomans also had time to see battlefields where their forefathers fought.

"It's an honor to be here,” Chief Warrant Officer 3 Christopher Nader said. ”It’s extremely humbling to follow in their footsteps."

They made time for quiet reflection on the American lives lost, no matter their branch of service. Every cross represents someone loved.

The American Cemetery in Epinal, France also honors those who are missing, including 22-year-old Staff Sergeant Leroy Taylor who went to Fairview High School.

Sergeant Fred Ackerly is also listed on the tablets of the missing. He lived in Tulsa with his mother, Pearl, before going off to war. Ackerly was killed in France during the second phase of the Battle of the Bulge.

The French people appreciate the sacrifices on their behalf.

About 10 years ago, Papelard-Brescia adopted two graves at the American Cemetery in Epinal. She decided more needed to be done to remember the Americans who never got to go home.

"First of all, when you come into the cemetery,” Papelard-Brescia said. “I mean, it breaks your heart."

"We work with a lot of the villages around Epinal, all of them, all of them have adopted soldiers from the 45th," Papelard-Brescia said.

The group also works with schools to adopt graves, arranges school field trips to the cemetery, and helps to put up monuments and plaques honoring American soldiers.

"It's almost inconceivable how much they remember and how every town sets up memorials to the 45th, and plaques to the 45th,” Neil said. “You see Thunderbirds everywhere."

"My organization has also paid for travel and visit for children of these brave men who never came because of lack of funds,” Papelard-Brescia said.

The group was instrumental in coordinating the visit from a delegation from Oklahoma.

"I don't think I would be here without Joceyln's group,” Carter said. “They started a movement."

That movement has now grown to more than 2,500 graves being adopted.

"It's a labor of love,” Staff Sgt Spencer Grayson said. “They're not doing it as a job; this is all volunteer work for them, they're doing it because they want to remember."

Papelard-Brescia also wants to reinforce relationships between French and American families, especially families who lost loved ones in the war.