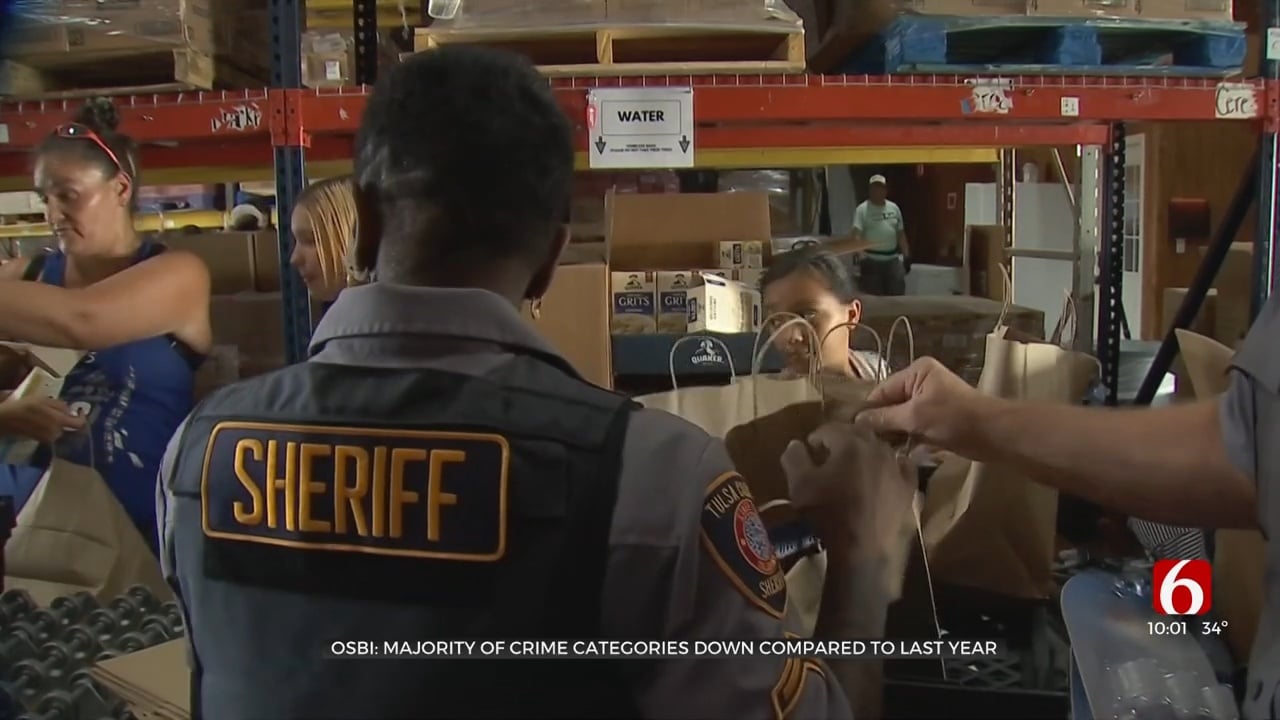 The OSBI reports crimes statistics are down across Oklahoma, with just a few exceptions. But crime experts said the new data only shows part of the picture.

"What you would hope for in a system that's functioning properly is that police ae doing a good job identifying the seriousness of the offense and sort of matching that with the crime that's charged and that prosecutors are doing a good job making sure that the decisions to prosecute particular cases are in the interest of justice," said Stephen Galoob, TU Professor of Law.

The OSBI puts all crime into three categories: Crimes Against Persons, Property, and Society. It said, with the exception of Human Trafficking, hacking, pick pocketing, and animal cruelty -- everything else is down.

The OSBI's numbers show assaults, vandalisms, and drugs top the lists of crimes law enforcement responded to the most this year.

"There's not like one magic bullet or one great Mayor or one awesome policy that explains these trends," said Galoob. "Usually, people's guesses match their political preferences."

Crimes Against Persons: Human Trafficking/Involuntary Servitude: went from 3 cases in 2021 to 7 cases in 2022

In the Crimes Against Property category, Destruction/Damage/Vandalism are the highest (still went down): in 2021, 23,166 // in 2022, 18,241 --> next highest would be all other larceny, followed by Burglary/Breaking and entering

"I wish we had publicly available data where we could not only look at these kinds of charges, but really dig deep into them and audit them," said Galoob. "This is a really complicated picture and it's a picture that we only get pieces of, and it would be a great thing for our state and for our public safety if we got a lot more of this information. We're able to make better informed decisions as a public about how much to invest in public safety verses other important priorities in our society," said Galoob.

However, TU Law Professor Stephen Galoob said the crime rate is different than crime itself and doesn't account for incidents that go unreported.

“I think one of the things that's dangerous is to run together crime, which is a real thing, it's something that people experience all the time and impacts so many people's lives. And the crime rate, which is a statistical artifact that is generated by government agencies. Now that statistical artifact is going to tell you something important about the real thing out there, but you shouldn't mistake it for the real thing any more than you should think that the weather can be fully described in terms of temperature," said Galoob.

Galoob teaches his students to consider the different ways the same pattern of conduct can be classified.

"So, many property crimes, there's probably 10 or 15 different offenses that you could charge for the same crime; so how a prosecutor or how police decide to classify those crimes is gonna make a big difference in how much time someone is going to eventually serve on those offenses," said Galoob.

The Tulsa County Sheriff's Office said its deputies handled an increase in robberies this year, but all other major crime categories went down.

They said being visible in problem areas, using technology like license plate readers, and community policing help a lot.

"We've tried to take a proactive approach to it such as if we see a lot of burglaries in one particular area we will really focus on that area. If they're home burglaries, patrol. We'll do watches in that area and keep a close eye out. We're out talking to citizens, you know, earning their trust. Getting them to tell us what's happening in their neighborhoods, what kind of activity they like to see; because a lot of times those citizens are our eyes and ears in those neighborhoods and if we can be very visible in those neighborhoods, create those relationships, then they can actually be our ally in both stopping crime, preventing it and solving it," said Roebuck. "We've done directed patrols in the Berry area and the Turley area because residents told us, you know they didn't like what they were seeing in their neighborhood. They wanted to see more of us."

The Sheriff's Office said next year it's really focusing on the child predator unit and will hold a community wide education session for parents in a couple of weeks.

Casey Roebuck said this is an opportunity to meet parents at one location and teach them trends, as well as let them know how predators are grooming children.

She said a lot of parents will be giving kids phones this year for Christmas and there are apps on those phones that parents have no idea about.

Roebuck said last year the sheriff's office added a detective to that unit and it has made a world of difference.