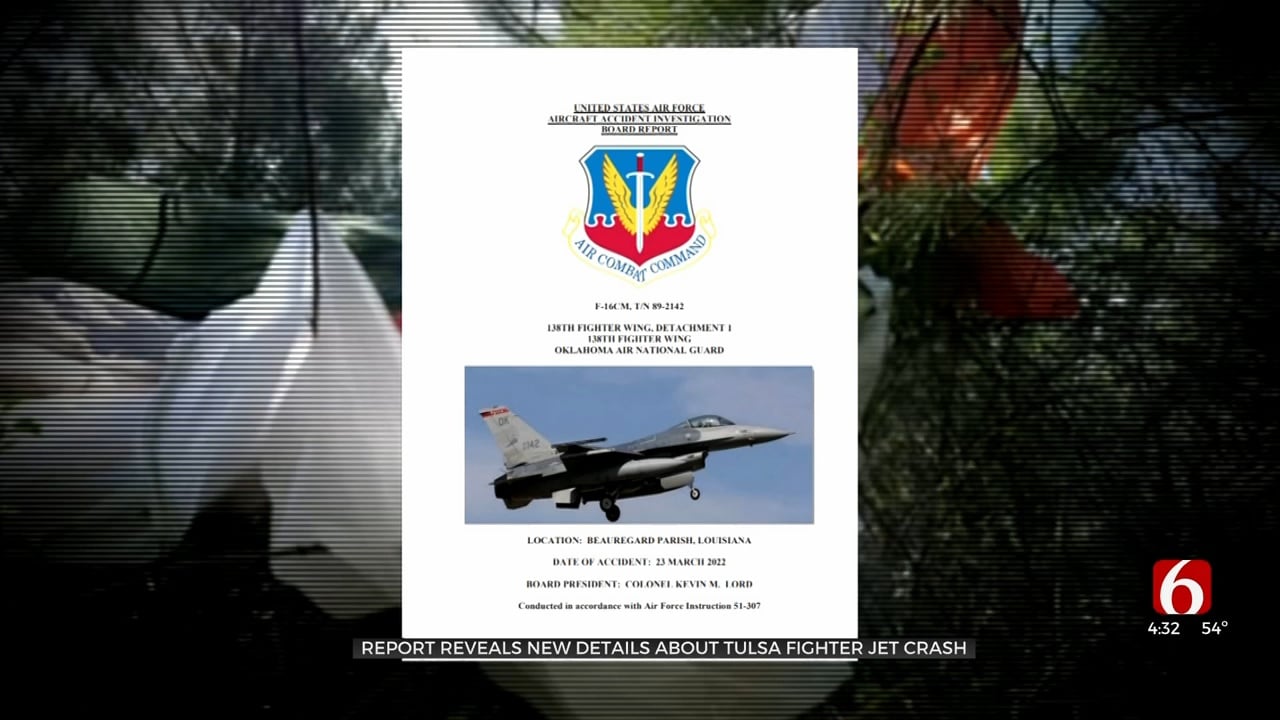 A report by the U.S. Air Force Aircraft Accident Investigation Board blames the pilot for crashing an Oklahoma National Guard F-16 in a Louisiana field earlier this year. The report reveals new details about the crash, which happened in March.

The Air Force report said the first training event started at 10:43 a.m. on March 23rd, with two F-16s in the air, which took off from Houston. Fourteen minutes later, the report said Maj. Alexander Drummond had ejected from his jet, and it crashed in a Louisiana field.

But the investigation found the jet could have kept flying, had Drummond stayed in. The jet is worth about $27 million.

Part of the investigation involved the Accident Investigation Board completing over 25 flight simulations at the Tulsa Air National Guard training center, to understand what a past pilot would have experienced. “The flight simulations confirmed…The MA [mishap aircraft] was still in a flyable state, prior to ejection," the report said.

The 30-page report said the problems started when the two pilots diverted from their training plans, and did something no one was expecting.

The other pilot, who was considered "senior" to Drummond, directed them to intercept a civilian plane, which was doing its own training, the report said.

Aside from not coordinating with anyone what they were doing, the report said the airmen got too close to the private plane, and were going too slow.

The investigation found that while Drummond was flying away from the private plane to rejoin with the other F-16 pilot, he hit the wrong switch in the cockpit. The report said this caused the aircraft to “shudder,” which was “unanticipated” for Drummond, but the report said it was "normal."

Four seconds later, the report said Drummond then decided to eject. He landed in a tree. The report said a nearby Black Hawk Unit that was preparing to do its own training came over to rescue Drummond, who had minor injuries.

Attorney General-elect Gentner Drummond declined to acknowledge the reports' findings about his son, but instead said in a statement, "As a father, my primary concern has always been my son’s safety and well-being. I have thanked God many times for protecting Alexander on that dangerous day. Hugging him when he arrived back in town after the crash is a memory I will cherish forever. This incident should be a reminder that when our loved ones serve in the military, they put their lives on the line each day. As an American, I thank my son for his service and I salute him and each service-member for their commitment to fighting for our freedom.”

The 138th Fighter Wing declined to comment, but the Oklahoma National Guard said in an email, “Both pilots mentioned in the report remain in flight status. Any potential disciplinary action will be conducted internally upon a thorough review of the Accident Investigation Board report. These are generally not releasable per regulation. While the jet has not yet been replaced, the 138th Fighter Wing remains strongly committed to serving in our nation's defense.”

You can read the full report here.

While neither pilot is named in the report, it is clear based on previous reporting on Drummond’s crash who the report is referring to.