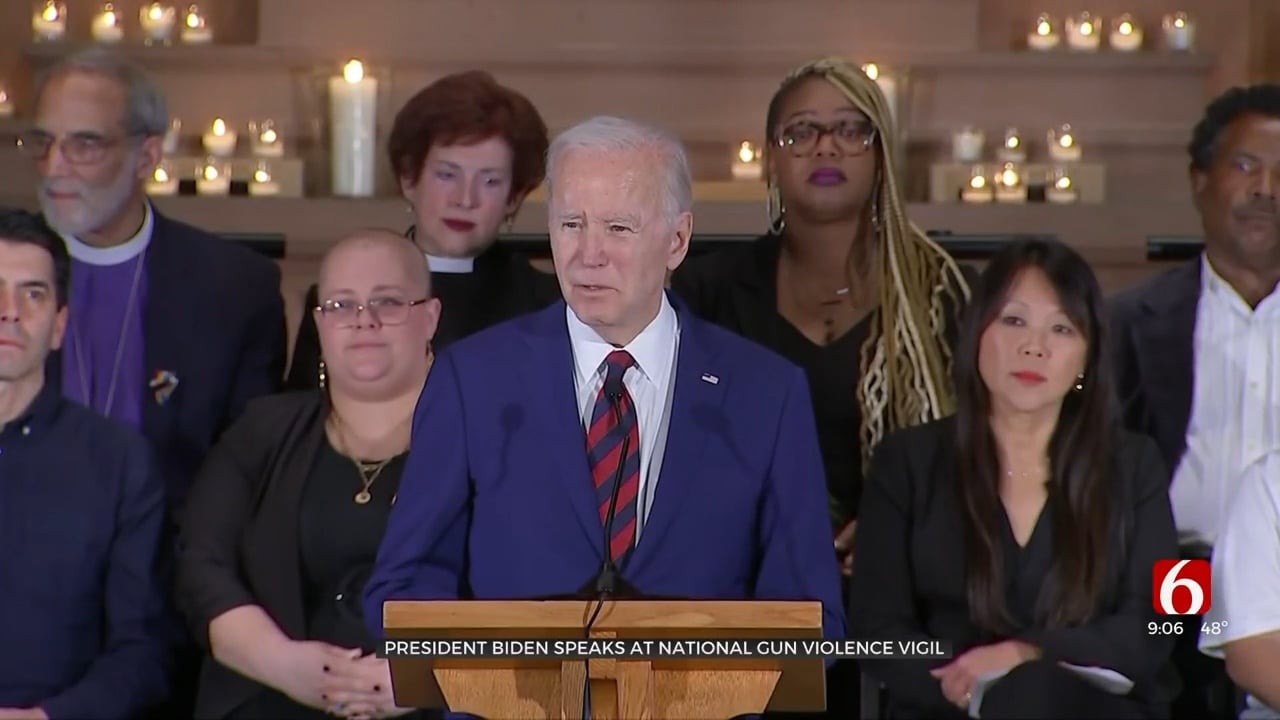 President Joe Biden called again Wednesday for a ban on so-called assault weapons as he spoke at a vigil honoring victims of gun violence, an event taking place nearly 10 years since the massacre at Sandy Hook Elementary School in Newtown, Connecticut, that spurred a new generation of advocacy for tougher firearms restrictions.

It was the first time a U.S. president has spoken at the yearly vigil, which is now in its 10th year, according to event organizers. Though the observance is led by the Newtown Action Alliance Foundation, it is meant to honor all victims of gun violence nationwide.

Killed at Sandy Hook in the school shooting on Dec. 14, 2012, were 20 first graders and six educators.

Biden, long an advocate for stricter curbs on gun use, signed the most significant restrictions in three decades in June, in the aftermath of the shootings at Robb Elementary School in Uvalde, Texas. The legislation imposed stricter background checks for the youngest purchasers, restricted guns from more domestic violence offenders and made it easier for states to enact “red flag” laws that help authorities seize firearms from those deemed a threat to themselves or others.

Biden on Wednesday noted the bill’s passage, drawing applause from the audience at St. Mark’s. But he said it’s “still not enough.”

“Our work continues to limit the number of bullets that can be in a cartridge, the type of weapons that can be pruchased and sold ... attempt to ban assault weapons, a whole range of things,” he said.

Biden has continued to push for more restrictions and regularly calls for a so-called assault weapons ban, though Congress lacks sufficient support to pass legislation that would restrict such high-powered weapons that can kill many people quickly.

“The idea we still allow semi-automatic weapons to be purchased is sick. Just sick,” Biden said on Thanksgiving. He mentioned then that he would start counting votes in Congress for such a ban, although the White House declined to answer Wednesday whether Biden has done so.

The president hailed the families holding vigil at the church: “Scripture says the light shines in darkness and darkness does not overcome it. All of you here tonight, you are the light ... and your loved ones and your friends, they’re the light. And they’ll always be with you, no matter what happens.”

When Biden and other lawmakers talk about “assault weapons,” they are using an inexact term to describe a group of high-powered guns or semi-automatic long rifles, like an AR-15, that can fire 30 rounds fast without reloading.

Once banned in the United States, the high-powered firearms are now the weapon of choice among young men responsible for many of the most devastating mass shootings. Congress allowed the restrictions first put in place in 1994 on the manufacture and sales of the weapons to expire a decade later, unable to muster the political support to counter the powerful gun lobby and reinstate the weapons ban.

The likelihood of lawmakers approving such restrictions will diminish even more next year, when Republicans will hold a narrow majority in the House.