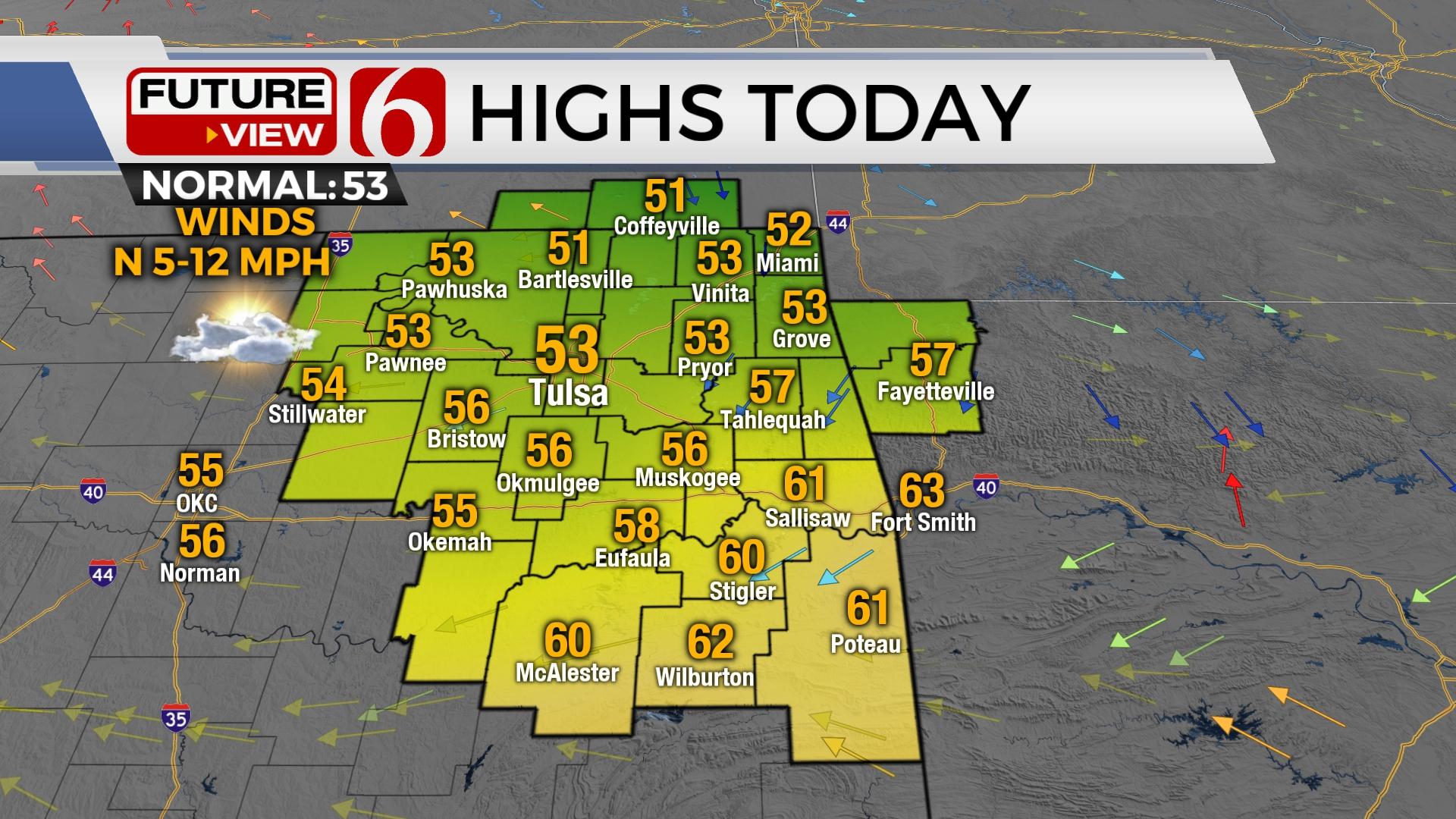 Cool temperatures and some rain chances hang around into the weekend. Patchy fog quickly exits with a brief return of some sunshine. Highs will reach the 50s north and lower 60s south. Rain returns later Friday night into part of Saturday before a strong system impacts the state early next week. The next disturbance arrives quickly Friday night with rain and some thunder. This system is expected to exit the area early Saturday morning for the northern third of the state but may continue through the day and early evening across far southern Oklahoma. Saturday highs will be in the lower to mid-50s north and slightly cooler across southern sections where rain may linger longer. Sunday supports highs into the upper 50s for daytime highs. A powerful upper-level trough will influence the state Monday and part of Tuesday with strong south winds, highs in the lower 60s, and the potential for strong to severe storms. We continue to see a few discrepancies regarding the exact synoptic setup and timing, but the overall potential for severe storms will remain for the early part of next week. As this system exits Tuesday afternoon, colder weather returns Wednesday and will be enforced with even colder weather Friday and next weekend. The progressive pattern is expected to remain for a while and will bring chances for some wintry weather impacts at times. The deep and strong upper trough will eject out of the Rockies into the plains Monday into early Tuesday morning with jet streak winds nearing 100 to 115 mph. Low level flow that returns Sunday evening will quickly transport low level moisture across Texas into at least central and southeastern Oklahoma if not more northward into at least northeastern Oklahoma. The impact of overcast to mostly cloudy conditions will keep Monday afternoon highs in the lower to mid-60s. Any breaks in cloud cover would bring highs in the lower 70s. A lead wave is expected to round the base of the trough and eject across the area Monday. This should trigger scattered storms during the day into the early evening across part of western Oklahoma with storms migrating eastward late Monday into part of Tuesday. Severe storms, including supercells would be possible. The main trough will eject to the northeast of the state Tuesday. Late Monday night into Tuesday morning, additional storms will be likely to develop along an eastward moving front with scattered storms becoming linear through the day. Severe storms will be likely along and ahead of the system before the front exits by early Tuesday afternoon. Severe storms are likely in this pattern. Strong northwest winds will follow the system passage with colder weather arriving Wednesday. Lows will drop to near freezing with afternoon highs in the lower or mid-40s. The pattern supports yet another frontal intrusion by the end of next week or into the weekend with morning lows in the 20s and highs in the 30s.