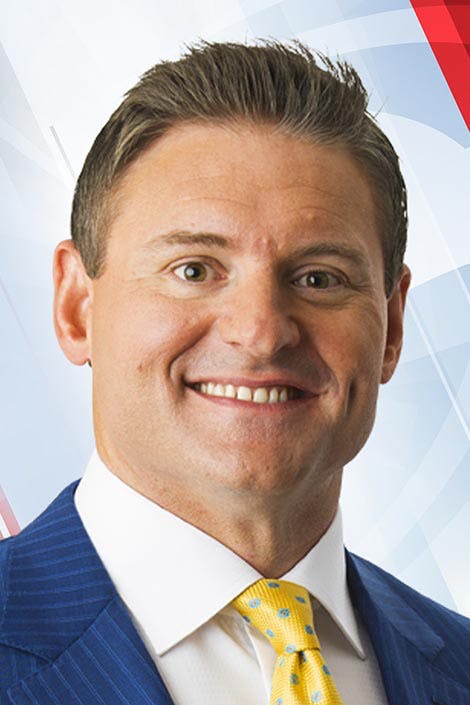 Dusty Dvoracek is from Lake Dallas, TX and played for the Oklahoma Sooners from 2001 – 2005, where he excelled both on the field and in the classroom. He was a two-time captain and two-time Big 12 champion. During his time at Oklahoma, he earned the Jay Myers Award (Outstanding Freshman Student Athlete), the Sooner Schooner Scholastic Award (Outstanding Student Athlete). He was also a 3-time member of the Academic All-Big 12 Team, 2 times named 1st Team All Big 12, and a 3rd Team AP All American. Dusty graduated from OU with a Business Management Degree.

In 2006, Dvoracek was drafted 73rd overall in the third round of the NFL Draft by the Chicago Bears, and played with the team for four years.

Dusty is now in his 4th year at ESPN where he works as a college football analyst. In addition to his duties with News 9 and ESPN, he is a sports radio host of the ‘Monsters of the Mid-Day’ (11-2) on WWLS 98.1FM The Sports Animal in Oklahoma City.

He has been married 11 years to his college sweetheart, Lacy. They have two sons, Jaxson(10) and Hudson (7), and a daughter Sloane (3). Dusty enjoys golfing, traveling, snow skiing, deep sea fishing, watching/quoting movies, and playing sports with his kids.

Subscribe to get the latest news, weather and announcements from Oklahoma's Own News 9. Sign-up is easy, and you can unsubscribe if you change your mind.