El Paso Police Chief Greg Allen says authorities are investigating a hate crime as among the possible motives in the shopping complex shooting that left 20 people dead and 26 more wounded.

The chief says authorities are looking into an online writing that indicated a potential connection to a hate crime to determine if it belonged to the suspected gunman.

Law enforcement officials have said a 21-year-old Dallas-area man named Patrick Crusius is in custody in the shooting. The officials were not authorized to discuss an ongoing investigation publicly and spoke to The Associated Press about his identity on condition of anonymity.

Police say most of the victims of Saturday’s attack appear to have been at a Walmart near the Cielo Vista Mall.

Texas Gov. Greg Abbott and El Paso police say 20 people have been killed and 26 others wounded in a shooting at an El Paso shopping center.

Law enforcement officials have said a 21-year-old Dallas-area man named Patrick Crusius is in custody in the shooting. The officials were not authorized to discuss an ongoing investigation publicly and spoke to The Associated Press on condition of anonymity.

Police say most of the victims of Saturday’s attack appear to have been at a Walmart near the Cielo Vista Mall.

Multiple people were killed or seriously injured and at least one person was in custody after a shooting Saturday at a shopping mall, police in the Texas border town of El Paso said.

Police responded in the early afternoon to an active shooter scene at the Cielo Vista Mall, near Interstate 10 on the east side of the city, and were advising people to stay away from the area and to look for missing family members at a school being used as a reunification area.

Ryan Mielke, a spokesman for University Medical Center of El Paso, said 12 people were brought to the hospital with injuries, including one that died. Two of the injured were children who were being transferred to El Paso Children’s Hospital, he said. He declined to provide additional details on the victims. 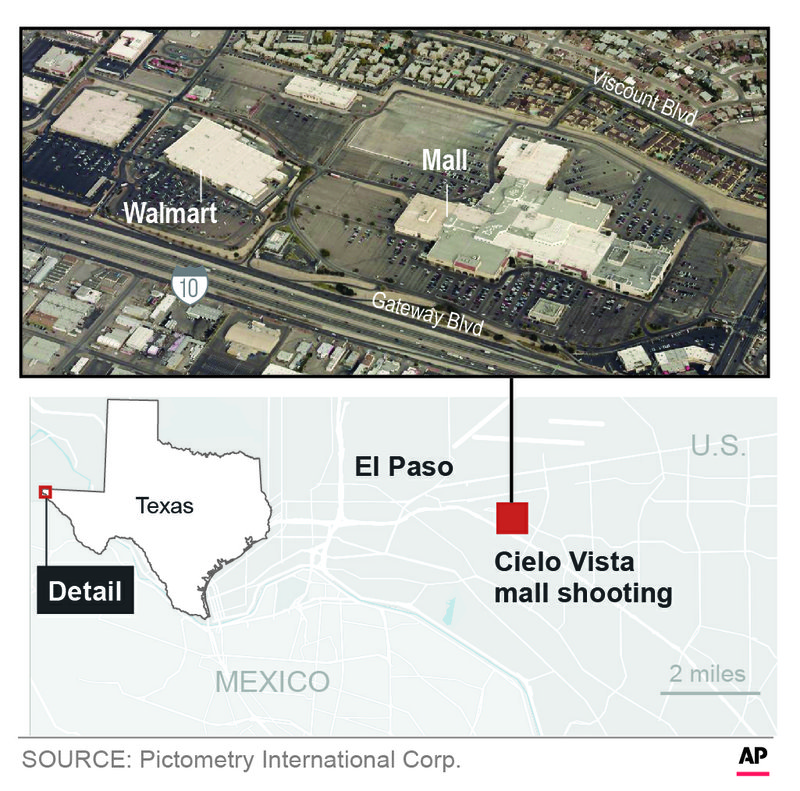 Eleven other victims were being treated at Del Sol Medical Center, according to hospital spokesman Victor Guerrero.

Texas Gov. Greg Abbott called the shooting “a heinous and senseless act of violence” and said the state had deployed a number of law enforcement officers to the city.

A family of three was among a dozen people waiting outside a bus station. They were trying to return to their car that was in a blocked-off Walmart parking lot.

“I heard the shots but I thought they were hits, like roof construction,” said Adriana Quezada, 39, who was in the women’s clothing section of Walmart with her two children.

Sgt. Enrique Carrillo said by midafternoon that a suspect was in custody and the public was no longer in danger.

Quezada’s 19-year-old daughter and 16-year-old son threw themselves to the ground, then ran out of the Walmart through an emergency exit. She said they were not hurt.

White House staff said President Donald Trump was briefed on the shooting and spoke about it with Attorney General William Barr and Gov. Abbott.

Presidential candidate and former Texas congressman Beto O’Rourke appeared a bit shaken as he appeared at a candidate forum Saturday in Las Vegas shortly after news of the shooting in his hometown was reported.

O’Rourke, who said he had called his wife before taking the stage, said the shooting shatters “any illusion that we have that progress is inevitable” on tackling gun violence.

The Democrat said he heard early reports that the shooter might have had a military-style weapon, saying we need to “keep that (expletive) on the battlefield and do not bring it into our communities.”

“We have to find some reason for optimism and hope or else we consign ourselves to a future where nearly 40,000 people a year will lose their lives to gun violence and I cannot accept that,” O’Rourke said.

El Paso, which has about 680,000 residents, is in West Texas and sits across the border from Juarez, Mexico.