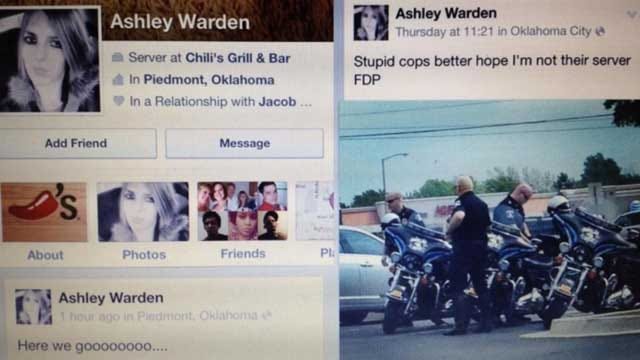 A local waitress is causing a national uproar over a picture and comment she posted about some Oklahoma sheriff's deputies.

Ashley Warden posted the picture on her Facebook page Thursday along with the comment: "Stupid Cops better hope I'm not their server FDP."

The post has gone viral and is now all over law enforcement sites across the country. On just one site the post received over 400 comments, a majority blasting Warden.

Many people contacted the waitress's employer, Chili's, over the whole thing and now that waitress has been fired.

The three men in the picture are Oklahoma County Sheriff's deputies.

"This is what she posts and what she chooses to post during Law Enforcement Week when we are honoring those who have died in service to our citizens, I think that's pathetic," said Sheriff John Whetsel.

The sheriff says his office has never had any dealings with Warden and the deputies had actually just finished volunteering the past five hours as a funeral escort for a Catholic priest.

"I was extremely disappointed that here are these dedicated public servants got called names and then get threatened by a lady that doesn't have a clue about who they are or what they do or the service they provide," he said.

Warden is not new to controversies involving police officers. She's the same Ashley Warden who was ticketed last year when her 3-year-old son peed in their front yard. That officer lost his job over the ordeal.

Now it looks like Warden will learn what that feels like. Wednesday afternoon, a Chili's spokesperson issued this statement saying she has been fired.

"Here at Chili's, the privacy and safety of our guests as well as the quality of food we serve each day is of utmost importance. With the changing world of digital and social media, Chili's has Social Media Guidelines in place, asking our team members to always be respectful of our guests and to use proper judgment when discussing actions in the work place. When we find that team members violate these policies, they are subject to termination. After looking into the matter, we have taken action to prevent this from happening again. Involvement in the local community is something Chili's prides ourselves on, and we are proud to partner with local law enforcement officials in our more than 1,200 restaurants throughout the U.S."

News 9 went by Warden's home on Wednesday, but a family member said she didn't want to comment.