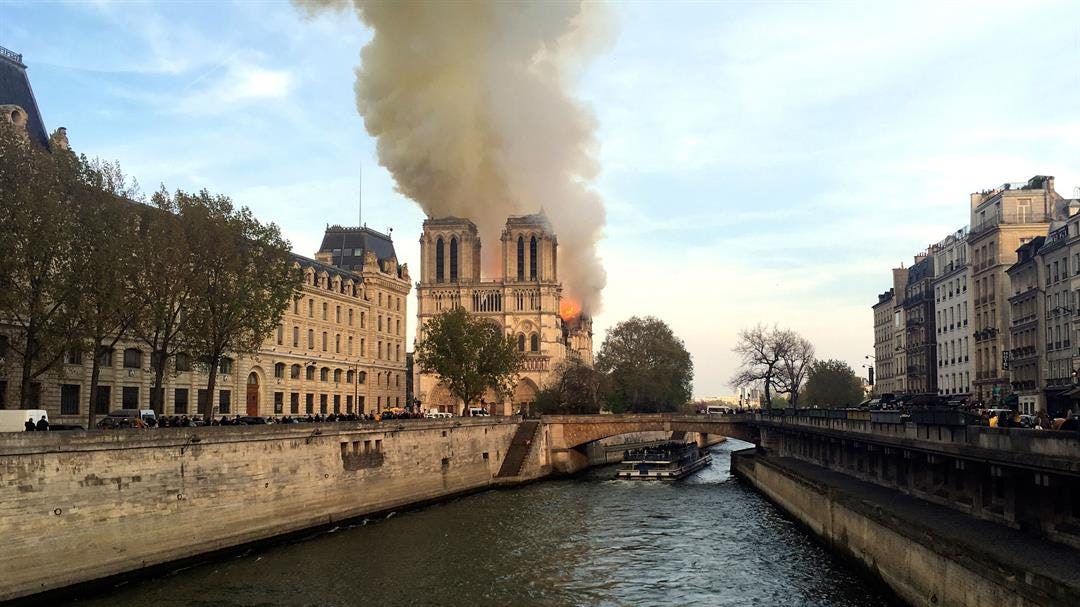 The iconic spire at the top of the Notre Dame Cathedral in Paris has collapsed after a major fire broke out Monday. Video showed part of the roof of the cathedral collapsing into itself as the fire raged on.

A French official and the Paris fire chief say they think Notre Dame Cathedral's landmark rectangular towers have been saved from the fire that caused horrific damage.

Junior Interior Minister Laurent Nunez said late Monday that authorities remain "prudent" but are "much more optimistic" than earlier in the night.

Paris fire commander Jean-Claude Gallet said a major accomplishment of hundreds of firefighters was stopping the flames from spreading to the north tower belfry.

Gallet says two-thirds of Notre Dame's roofing "has been ravaged." He says one firefighter was injured.

He says fire crews will keep working overnight to cool down the structure.

The deputy mayor of Paris, Emmanuel Gregoire, said the cathedral had suffered "colossal damages," and the emergency services were trying to salvage the art and other priceless pieces stored in the cathedral.

Earlier, French President Emmanuel Macron arrived at the site to view the damage as firefighters continued what appeared to be a losing battle against the flames. The Ile de la Cité, the island in the Seine where the cathedral sits, was evacuated. Thousands of onlookers gathered along the banks of the river to watch the awful scene.

A collection of dramatic videos and photos spread through social media on Monday showing the roof and spire of the nearly 900-year-old cathedral engulfed in flames and massive amounts of smoke billowing up from its roof.

No deaths have been reported so far, according to the Associated Press.

Authorities have not yet released the cause of the fire or any further information as to how the fight to suppress the flames has progressed. The fire may potentially involve renovation works being carried out at the site, the fire service said.

President Trump commented on the fire this afternoon as he attended a roundtable conference in Minnesota.

"It's one of the great treasures of the world," he said. "It's part of our culture, it's part of our lives. That is a truly great cathedral and I've been there, I've seen it, and there is... no cathedral in the world like it. It is a terrible scene." The president added, "It looks like it's burning to the ground."

The cathedral receives 12 to 13 million visitors a year and is home to countless paintings, sculptures and other priceless works of art. James Shepherd, director of preservation and facilities at the Washington National Cathedral, spoke with CBSN on Monday.

"That's 800 years of history of people pilgrimaging there, and worshiping there, and the accumulation of culture," Shepherd said by phone. "All of that will have to be taken into consideration as they try to repair this church and save it after this devastating fire."

"This is a culturally devastating moment for the city of Paris, the country and the world," Shepherd said.