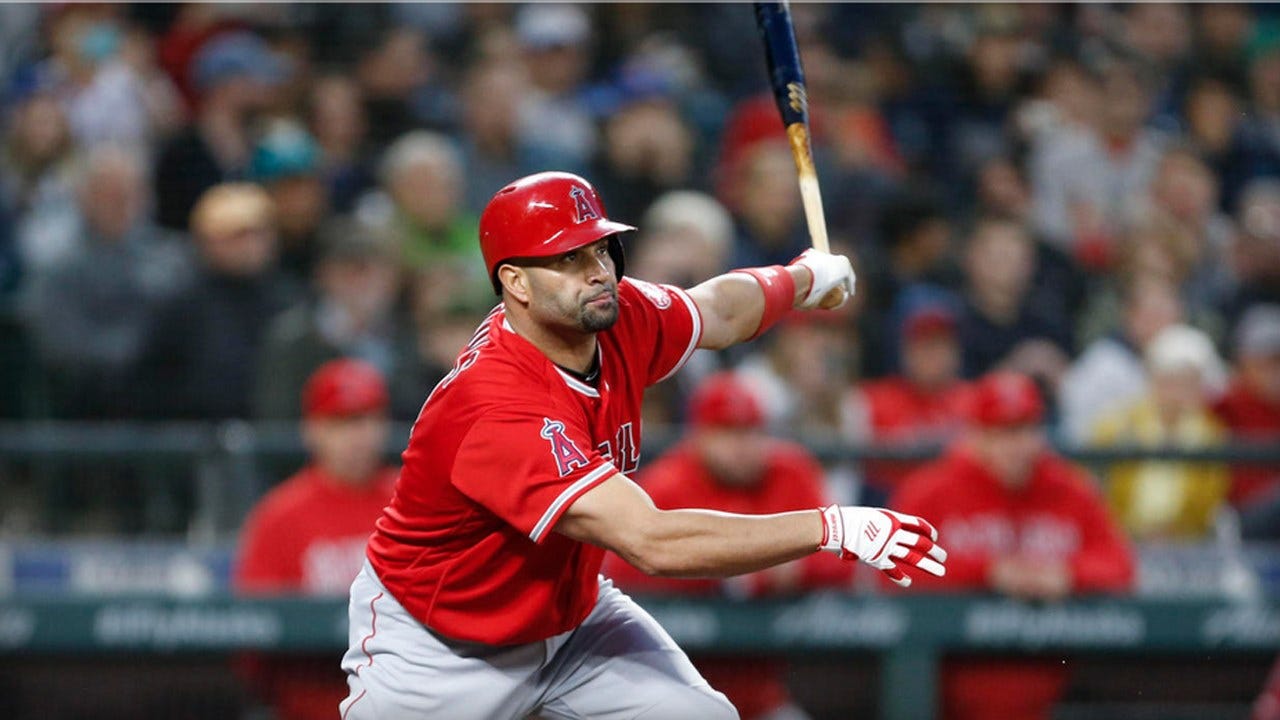 Albert Pujols was going to get a toast in the clubhouse regardless.  Still, he wanted to make sure his 3,000th hit came after a win.

"I was really excited, but at the same time you still have a game you need to play and you still need to focus to win that game," Pujols said.  "That's what I told those guys.  Let's go win that game so it can taste a little better."

Pujols became the 32nd member of the 3,000-hit club with a broken-bat single in the fifth inning of the Los Angeles Angels' 5-0 win over the Seattle Mariners on Friday night.  He added another hit in the ninth inning to pass Roberto Clemente on the career list, a two-run single that also ensured the Angels would walk away with a victory.

"I think he knows how important it is for our club to continue to put pressure on teams to score runs," manager Mike Scioscia said.  "Those two runs were big, obviously."

CBS Sports reports that while he's been in decline from his Hall of Fame form for a while, Pujols has been turning back the clock of late with five hits, a home run, five RBI, and three runs over his last 12 at-bats.  He's now hitting .256 with six home runs and a .733 OPS through 129 at-bats in his age-38 season.

Pujols got No. 3,000 in his sixth attempt to join the exclusive list after getting to 2,999 career hits.  Pujols got just enough of Mike Leake's pitch to find the outfield grass and add another accolade to a likely Hall of Fame career.  He received a standing ovation from the crowd in Seattle after reaching first base and being congratulated by his teammates.

The slugger made his career out of hitting the ball out of the yard, but reached the milestone by throwing his bat at a sinker that was probably out of the strike zone.  Pujols didn't make great contact but was strong enough to loft the ball over the infield and into right.

His two-run single in the ninth inning scored Mike Trout and Justin Upton with hit No. 3,001.

"It was fun that it turned into a little bit of a battle before he got a hit.  Congratulations to him," Leake said.  "He's a competitor at every second that he's on the field.  He's been a joy to watch and a joy to compete against, for sure."

The 38-year-old Pujols joined Hank Aaron, Willie Mays, and Alex Rodriguez as the only major leaguers with 3,000 hits and 600 homers.  He's the first player to reach 3,000 hits since Adrian Beltre last year against Baltimore.

Pujols became the second Dominican to reach the mark after Beltre.  With Seattle's Ichiro Suzuki stepping away this week for the remainder of the 2018 season, Beltre is the only active player with more hits than Pujols.

"I'm aware of the legacy and the people that I tie and am on the same page right now," Pujols said.  "But at the end of the day it's about winning a championship.  Nothing would be more special than in September and October and playing in the playoffs and bringing a championship back to the city of Anaheim."

And it may be a while before another player joins the club.  The next closest player to 3,000 is Miguel Cabrera, who is more than 300 hits away.  After Cabrera is Robinson Cano, nearly 600 hits shy of the mark.

"Three-thousand hits is a lot.  I think the players that have played this game understand how hard it is to stay healthy and be that productive over that length of time," Seattle manager Scott Servais said.  "It's pretty special to get there."

Pujols' accomplishment came in a victory thanks to the pitching of Garrett Richards, who took a shutout into the seventh inning.  Richards (4-1) scattered four hits and had eight strikeouts in his first start against Seattle since late 2015.

Shohei Ohtani was lustfully booed by Seattle fans in his first game in the Pacific Northwest.  The Mariners believed they had a shot at landing the Japanese star last offseason, only to see him choose a division rival.  He showed what they missed out on with two hits, including a two-out RBI double after Pujols' 3,000th hit, giving the Angels a 3-0 lead.

Leake (3-3) lost for the third time in four starts.  He threw 5 1/3 innings and matched a season-high with four walks.

Pujols is the second player to collect his 3,000th hit in Seattle after Rafael Palmeiro's double in 2005 at Safeco Field.  Like Pujols, Palmeiro's hit came in the fifth inning.

All signs are that Ohtani will return to the mound for the Angels on Sunday.  Scioscia said Ohtani's bullpen session on Friday went well and, as long as there aren't any issues when he's re-examined on Saturday, he's expected to start the series finale in Seattle.

The Angels placed C Martin Maldonado on bereavement list and selected the contract of C Juan Graterol from the minors.  LHP JC Ramirez was transferred to the 60-day DL.

Angels:  Lefty Tyler Skaggs (3-2) allowed only two earned runs in his last start, but was tagged with the loss against the New York Yankees.  Skaggs has a 4.81 ERA in seven career starts vs. Seattle.

© 2018 CBS Interactive Inc. All Rights Reserved.  This material may not be published, broadcast, rewritten, or redistributed.  The Associated Press contributed to this report.