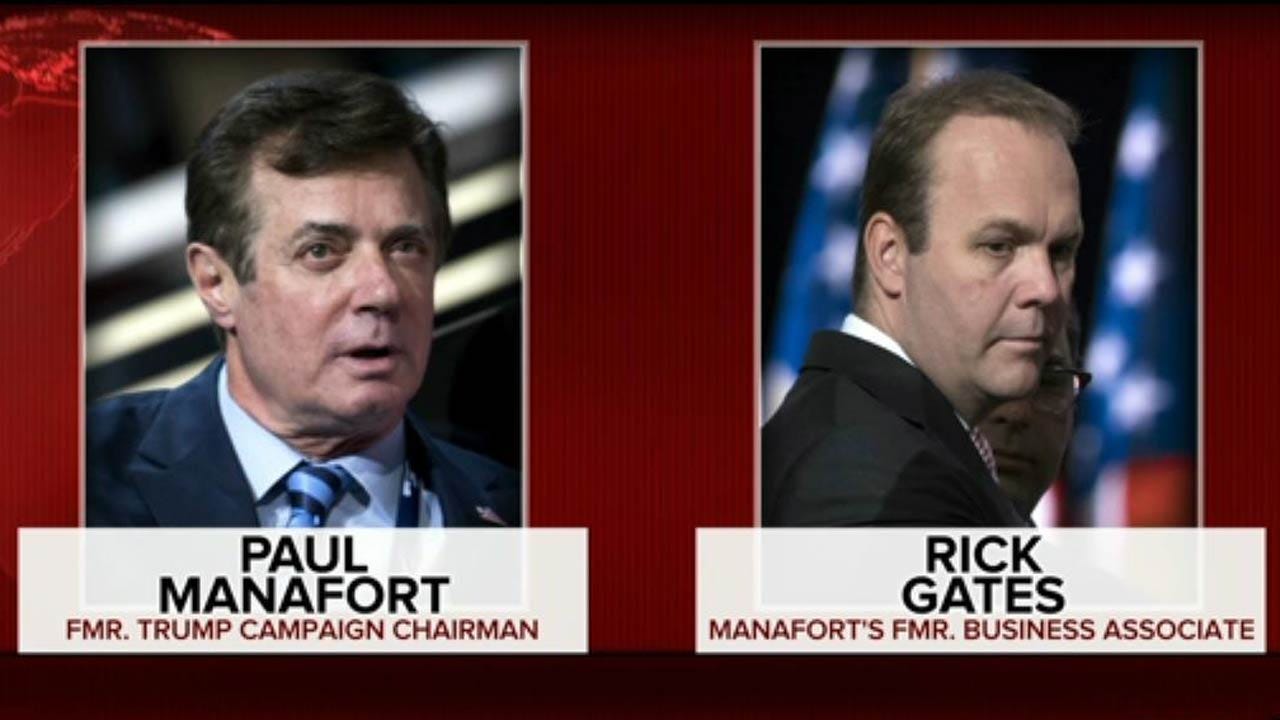 President Trump's former 2016 campaign chairman Paul Manafort and Rick Gates, Manafort's former business associate, have been indicted by a federal grand jury in the investigation into Russian meddling in the U.S. election, according to unsealed documents released Monday.

And another Trump campaign aide, George Papadopoulos, has pleaded guilty to making false statements to the FBI. His statements had to do with the nature of his relationship with "certain foreign nationals whom he understood to have close connections with senior Russian government officials."

The 31-page indictment against Manafort and Gates contains 12 counts including conspiracy to launder money, conspiracy against the U.S., unregistered agent of a foreign principal, false and misleading statements surrounding the Foreign Agents Registration Act (FARA), false statements and seven counts of failure to file reports of foreign bank and financial accounts.

After it became public that three of his former campaign aides were indicted, Mr. Trump claimed on Twitter Monday morning that there was "no collusion."

Between at least 2006 and 2015, Manafort and Gates worked as unregistered agents of the government of Ukraine, and took in tens of millions of dollars in income, the indictment noted. The pair laundered the money through "scores of" U.S. and foreign corporations and bank accounts in order to hide their Ukraine payments from U.S. authorities, the indictment says. They funneled money through accounts in Cyprus, Saint Vincent, the Grenadines and the Seychelles, all while falsely and repeatedly reporting to the U.S. that they had no foreign bank accounts, according to the indictment.

CBS News: Who is Richard Gates?

Both of them directed a campaign to lobby U.S. officials on behalf of the Ukrainian government, and they broke the law by not reporting their work and fees to the U.S., the indictment says.

Manafort enjoyed a "lavish lifestyle" in the U.S. using his "hidden wealth" overseas, the indictment says, and he did not pay taxes on that income. He spent "millions of dollars on luxury goods and services" and purchased multi-million dollar properties in the U.S.

For the first count of conspiracy against the U.S., the indictment says that Manafort and Gates "knowingly and intentionally conspired to defraud the United States by impeding, impairing, obstructing and defeating the lawful governmental functions of a government agency, namely the Department of Justice and the Department of the Treasury."

CBS News spotted Manafort entering the Washington Field Office of the FBI Monday morning after he left his apartment in Alexandria, Virginia with his lawyer. Manafort was approached by CBS News but declined to comment. He was later seen arriving to court in Washington, D.C. CBS News reported Friday that the grand jury used by Special Counsel Robert Mueller approved the first charges stemming from the investigation. The indictment was under seal over the weekend. It was unsealed Monday after the defendants surrendered themselves to the FBI.

Later Monday morning, the special counsel's office released another statement, saying that George Papadopoulos, 30 years old, of Chicago, Illinois, "pleaded guilty on Oct. 5, 2017, to making false statements to FBI agents, in violation of 18 U.S.C. 1001." His case was unsealed Monday and a sentencing hearing will be scheduled at a later date.

Manafort served as campaign chairman of Mr. Trump's presidential campaign from March until August of last year. The FBI raided his home over the summer, even picking the lock while he was at home asleep.

Papadopoulos, previously an adviser for Ben Carson's presidential campaign, graduated with a bachelor's degree in 2009 and a master's degree a year later. He was advising the Trump campaign on foreign policy. Among the honors he listed on his LinkedIn profile was his position as U.S. Representative at the 2012 Geneva International Model UN.

CBS News' Jeff Pegues reports the indictments signal a new phase in the Russia probe and CBS News' Paula Reid adds that Mueller is trying to make a statement by moving quickly and aggressively.

In September, The New York Times reported that federal prosecutors had planned to indict Manafort. CBS News confirmed that month that Manafort had been wiretapped under a foreign intelligence warrant in connection with U.S. concerns that he was communicating with Russian operatives who wanted to influence the American election. The warrants were issued before Robert Mueller was appointed as special counsel to take over the investigation from the FBI.

Who is Paul Manafort?

Paul Manafort is a lobbyist and political consultant who worked across numerous presidential campaigns, most recently stepping in as chairman of Donald Trump's successful 2016 presidential campaign. Manafort came on board the Trump campaign in March 2016, but resigned in August 2016 as his connections to former Ukrainian president Viktor Yanukovych came under press scrutiny.

Manafort was a founding partner of Black, Manafort & Stone, a lobbying firm he set up in 1980 with Roger Stone, another on/off Trump advisor and notorious political operative. The firm lobbied in Washington D.C. on behalf of leaders like Congolese strongman Mobutu Sese Seko, Filipine president Ferdinand Marcos, among others.

Associated Press A federal judge in Oklahoma has awarded ownership of the zoo made famous in Netflix’s “Tiger King” docu-series to Joe Exotic’s chief rival.

Associated Press A federal judge in Oklahoma has awarded ownership of the zoo made famous in Netflix’s “Tiger King” docu-series to Joe Exotic’s chief rival.