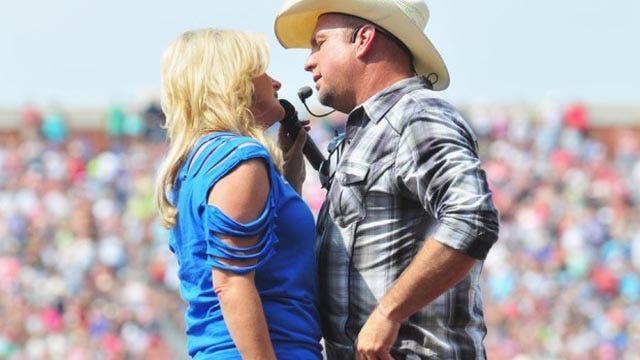 CMT.com is reporting that native Oklahoman Garth Brooks and wife Trisha Yearwood are leaving Green Country and moving back to Nashville.

Since 2003, the country music power couple has been living on a ranch in Owasso near Brooks' ex-wife while their three daughters attended school.

Brooks is now a grandpa and his youngest daughter will leave for college this fall. He also has announced he is ready for the road again after making fatherhood a priority. Brooks retired from 2001-2009, and as his daughters got older, he exclusively played a one-man show at the Wynn Theater in Las Vegas from 2009-2013.

According to CMT.com, Yearwood said it's time for the couple to "do the next thing" in their lives.

"I have loved living in Oklahoma," CMT.com reports Yearwood said. "It's been a great place to raise our girls, and the thing I'll miss the most is that I've made some of the best friends I'll ever have. But we'll always be best friends.

"Garth and I have always sort of been gypsies. If you do this for a living, home for us is really just where we are together," Yearwood reportedly told the website. "…There's an energy about Nashville that I love and I miss. And it's so awesome right now. It has a new energy that's so cool. And it makes sense because it's been a bit of a challenge to not live there and to have to fly in and out for work."

Along with Brooks launching back into his singing career with a stint in Ireland this summer that likely will lead to more gigs, Yearwood also is in demand with recording music, writing cookbooks and starring on her own show on the Food Network.

Another of country music's favorite couples, native Oklahoman Blake Shelton and wife Miranda Lambert, also is putting down roots in Nashville, according to the songstress.

Lambert told the Taste of Country website last month that the duo purchased a home in Music City because they spend so much time there recording.

The couple reportedly will continue to live full time in Tishomingo, where Shelton has lived for years and Lambert opened a women's boutique to do her part in saving the Oklahoma small town's Main Street district.

Read more at Taste of Country