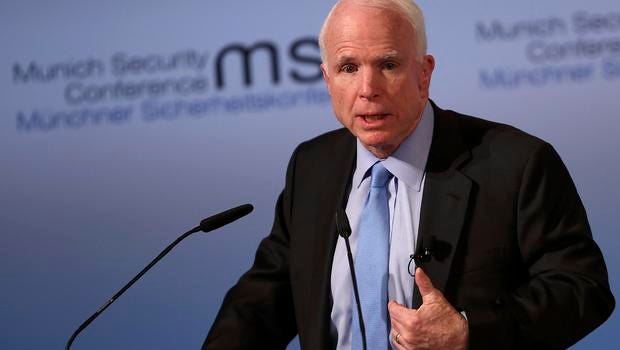 Senator John McCain, R-Arizona, has been diagnosed with a cancerous brain tumor, according to a statement released by his family and the Mayo Clinic.

The statement says that following a procedure to remove a blood clot the diagnosis was revealed.

"On Friday, July 14, Sen. John McCain underwent a procedure to remove a blood clot from above his left eye at Mayo Clinic Hospital in Phoenix," the statement read. "Subsequent tissue pathology revealed that a primary brain tumor known as a glioblastoma was associated with the blood clot."

The statement also added that the 80-year-old senator and his family are reviewing further treatment options.

"Treatment options may include a combination of chemotherapy and radiation," it added. "The Senator's doctors say he is recovering from his surgery 'amazingly well' and his underlying health is excellent."

Meanwhile, McCain's office released a statement in wake of the recent revelation.

"Senator McCain appreciates the outpouring of support he has received over the last few days. He is in good spirits as he continues to recover at home with his family in Arizona. He is grateful to the doctors and staff at Mayo Clinic for their outstanding care, and is confident that any future treatment will be effective. Further consultations with Senator McCain's Mayo Clinic care team will indicate when he will return to the United States Senate."

Late Wednesday, McCain's daughter Meghan released a statement on social media saying "the news of my father's illness has affected every one of the us in the McCain family."

"My fears for him are overwhelmed by one thing above all: gratitude for our years together, and the years still to come," Meghan wrote.