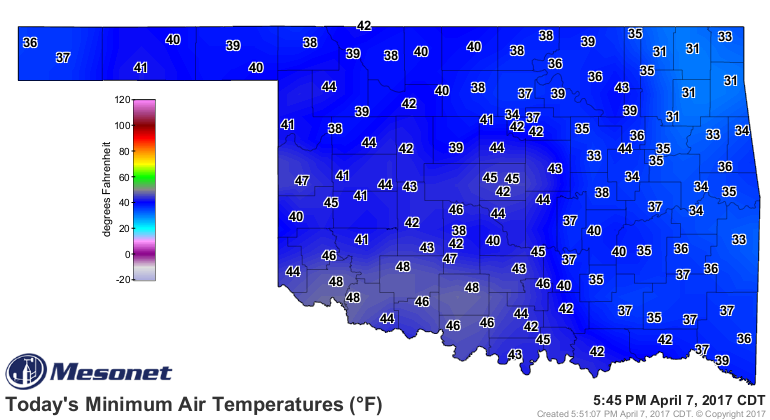 As expected, some locations started off the day right at the freezing mark as you can see from the overnight lows that were recorded by the good folks at the OK Mesonet.  Anyway you look at it, a chilly start to our day but temperatures rebounded nicely with the sunny skies and a light SE breeze this afternoon.  Here in Tulsa, our max/min so far has been 72/39.  Click here for the normal and record values for this date or any other date for that matter.

For tonight, temperatures will be much milder as those southerly winds will not be calming down and in fact will be rather gusty by morning with winds of 10-20 mph or more.  That will keep most of us in the 50s to start the day under fair skies for the overnight hours as well.  Then, as we go through the day Saturday look for those southerly winds to become quite strong with sustained winds in the 20-30 mph range and gusts well above 30 at times.  We will also have lots of sunshine so with the very mild start to our day, afternoon temperatures should be reaching the lower 80s for most locations.

Those strong southerly winds will continue through Saturday night and through the day on Sunday and will eventually bring more moisture our way.  Also, our next upper level storm system will be approaching later Sunday and that combination means an increase in cloud cover.  In fact, we should have mostly cloudy skies by Sunday morning and right on through the day Sunday and Sunday night.  That means an even milder start Sunday with morning lows in the 60s, but the clouds should keep our daytime temperatures generally in the 70s.  Some of the data suggests a very thick low level cloud deck with perhaps even some drizzle which would result in temperatures holding in the 60s all day, but the more likely scenario is for a few brief breaks in the cloud deck and afternoon highs well into the 70s.

Late in the day Sunday or more likely for the overnight hours, we will have another chance of showers and storms in advance of the next cool front that should be arriving Monday morning.  Those storms are expected to fire NW of us, and then move through during the overnight hours and some may be severe as you can see on the Storm Zone Map.

The cold front that will be pushing across the state Monday morning does not appear to be particularly strong and the more recent data runs have it gradually making it to near the Red River Monday night and stalling out down there.  That means a continued chance of lingering showers/storms over the more S/SE counties for the balance of the day Monday and through that night.  Tuesday will also have a chance of showers/storms primarily over the more southern counties, but there could be a decent chance just about anywhere.  Also, since the boundary is stalling out just to the south it will not take much for the deeper, better quality moisture to return bringing a better chance of more widespread showers/storms for the entire state.

All the available data now suggests there will be a series of systems aloft ejecting out over the state for the middle to latter part of the coming week resulting in a very unsettled weather pattern.  Since there should be plenty of moisture available, that means the potential for some locally heavy rains and pretty much a daily chance of showers/storms.  Notice the 7 day QPF is also picking up on a wet signal for most of the state due to the unsettled weather pattern that will persist through much of next week.

As a rule, that also means warmer than normal temperatures for next week as you can see on our forecast page.  There will be some daily variation in max/min temperatures due to the timing and location of those daily rain chances as the clouds/rain would tend to hold daytime highs down somewhat while keeping our night time lows up somewhat.  As a general rule though, look for temperatures to be warmer than normal through out that time frame.

In fact, the 8-14 day outlook,extending through Easter continues to suggest warmer than normal temperatures.  It also keeps us in that unsettled pattern with an above normal chance of showers and storms through the Easter weekend as well.

Kristen Weaver As COVID-19 cases continue to go up in Oklahoma, so does the number of people that are getting tested. Some people are worried about how long it takes to get their test results back.