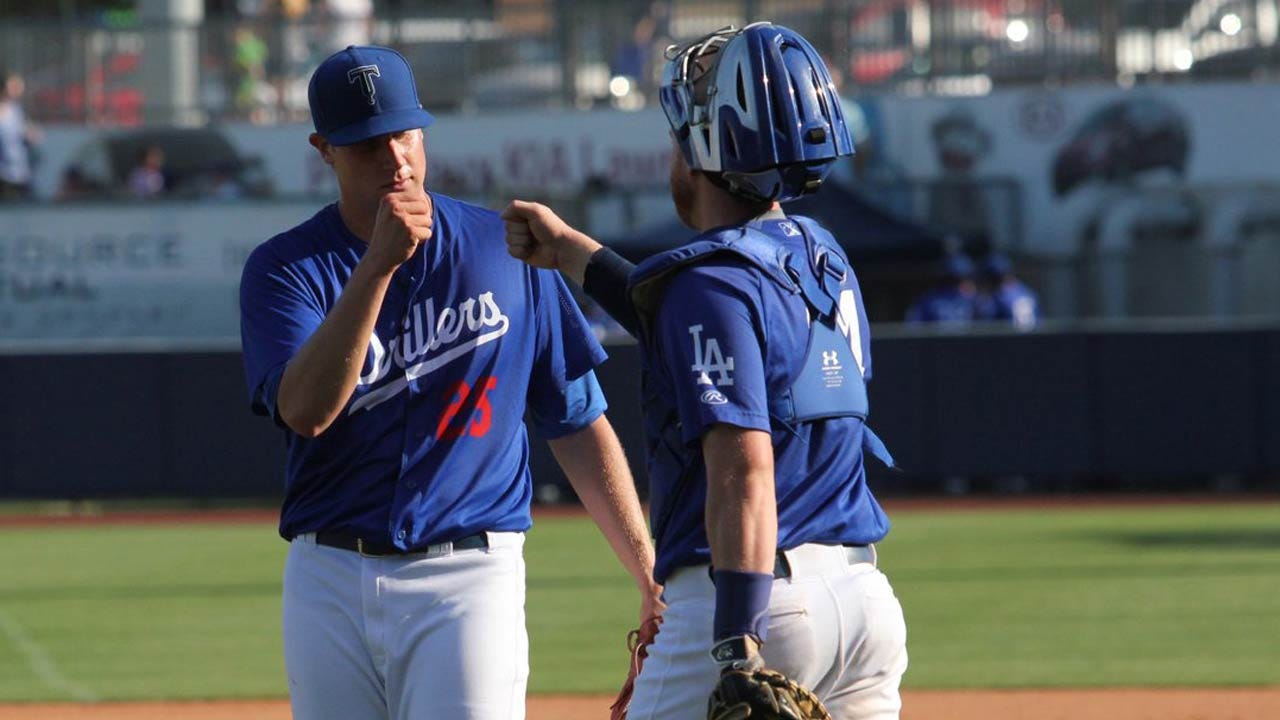 The Tulsa Drillers matched a franchise record Tuesday night in dramatic fashion. The Drillers swept a doubleheader from Northwest Arkansas to run their winning streak to nine straight games, equaling the longest in team history. The victory in the second game came after spotting the Naturals a 4-1 lead. The Drillers capped their 6-4 comeback victory on a two-run, walk-off home run from Alex Verdugo in the bottom of the eighth inning.

Starting pitcher Brock Stewart accounted for the win in the opener, working a seven-inning complete game in the 3-1 win.

Tuesday's sweep gives the first-place Drillers a 1½ game lead over Springfield in the North Division standings of the Texas League with 13 games remaining in the first half of the season.

The Drillers have now won 14 of their past 15 games. Dating back to May 4, they have won 24 of their past 31 games to move from last place, 6½ games out of first in the North, to their current position atop the standings.

The Naturals produced their only run of the game in the very first inning as the first three batters reached safely against Stewart. Carlos Garcia opened the game with a leadoff single, and Stewart hit Corey Toups with a pitch. Another base hit from Mauricio Ramos loaded the base with no outs.

Ryan O'Hearn plated Garcia with a slow chopper up the first base line that turned into a 1-3 RBI, ground out before Stewart retired the next two batters to keep the damage to only one run.

Northwest Arkansas starting pitcher Eric Skoglund began the game as if the one run would be all he needed to get the victory. He set down the first eight batters he faced, four by strikeouts, before Drew Maggi singled with two outs in the third.

The Drillers, who had scored only one run in 14 innings against Skoglund this season, finally solved the lefthander in the bottom of the fourth. Adam Law led off with a double and scored the tying run when Calhoun followed with a base hit.

A one-out double from Cody Bellinger put runners at second and third, and Alex Verdugo brought both of them home with a base hit to right field that put the Drillers in front 3-1.

It was plenty of support for Stewart who blanked the Naturals the rest of the way. The right-hander, recorded only the second complete game of the season for Tulsa, allowing the one run and seven hits in seven innings of work. Stewart joins Chase De Jong, who threw a seven-inning complete game shutout in Springfield on May 18.

Since being promoted from Rancho Cucamonga during the second week of the season, Stewart has now made nine starts for the Drillers and has allowed one earned run or fewer in eight of those appearances. He has a 3-3 Double-A record with a Texas League-leading 1.12 ERA.

It was the Drillers who got off to a quick start, courtesy of Calhoun. The second baseman belted a solo home run with two outs in the bottom of the first inning to stake Tulsa to a 1-0 lead.

Northwest Arkansas erased its deficit with a pair of runs in the top of the third inning off Tulsa starting pitcher Scott Barlow. With one out, Barlow's control let him down as he issued back-to-back walks. After a double steal, the walks proved costly as Bubba Starling produced a two-run single to give the Naturals a 2-1 lead.

They tacked on two more runs in the fourth. Logan Moon led off with a double and scored on a squeeze bunt from Terrance Gore before another run-scoring hit from Starling made it 4-1.

Calhoun struck again in the bottom half of the fourth to pull the Drillers closer. His second homer of the game, and his team-leading 10th of the year, made it a two-run game.

Tulsa evened the score at 4-4 with a pair of runs in the fifth, and again, Calhoun was in the middle of things. The rally began with a one-out walk to Drew Maggi. After a ground out, Brandon Trinkwon singled him home. Calhoun then plated Trinkwon with a double into the left field corner to level the score.

Both bullpens combined to stop the scoring over the next two frames, sending the game into extra innings and setting the stage for Verdugo.

The bottom of the eighth began with a leadoff single from Bellinger before Northwest Arkansas reliever Eric Stout struck out Lars Anderson, bringing Verdugo to the plate. The centerfielder worked a 2-2 count by fouling off three pitches before driving a ball deep into right field. The high drive landed into the glove of reliever Rob Rogers in the Drillers bullpen for the game-winning two-run homer.

For Verdugo, who just came off the disabled list on Sunday, it was his eighth home run of the year.

The Tulsa bullpen was outstanding in the nightcap, as Michael Johnson, Ralston Cash and Caleb Dirks combined to hold the Naturals scoreless over the final four innings, giving the Drillers the opportunity for the comeback.

Calhoun combined to go 4-7 in the twin bill with the two homers and four runs batted in. Bellinger matched him with four total hits as the duo combined for nearly half of Tulsa's 17 hits on the night.

The Drillers will not have to wait long in their attempt to establish a new franchise record winning streak as the two teams will be right back in action Wednesday afternoon. The pitching matchup will feature Trevor Oaks (6-1, 2.72 ERA) for the Drillers against Matt Strahm (2-4, 3.00 ERA) of the Naturals. First pitch in downtown Tulsa is slated for 12:05PM in what will be the final weekday, afternoon game of the season at ONEOK Field.