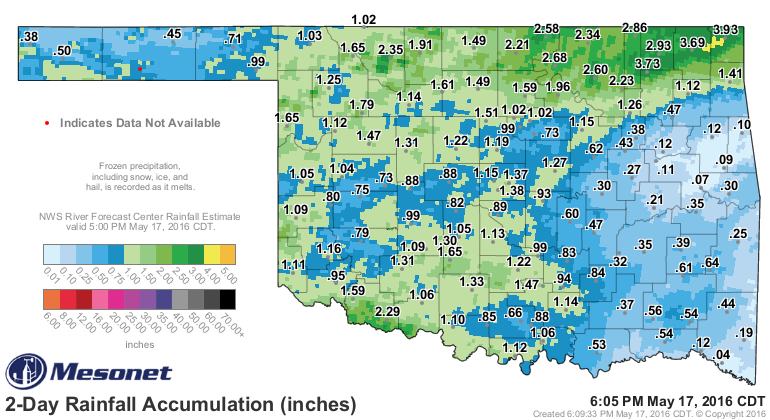 It has been 4 straight days now since our daytime temperature here in Tulsa has made it even to 70 and the 64 degrees today is a record for the coolest maximum temperature ever on this date.  The previous record was 65 set back in 1935, but the unusual aspect of today’s record is that the high temperature for the 24 hour period was just after midnight as temperatures this afternoon have stayed in the 50s.  An inverted temperature profile is not that uncommon during the cool season, but is certainly unusual this late into Spring.  As you can see on the max/min temperature map, all of NE OK was certainly cool and keep in mind that many of those maximum temperatures were recorded shortly after midnight.

The cloudy skies and drizzle through the morning hours together with a brisk northerly wind certainly contributed to the cool conditions today.  Rainfall today was generally light but over the last 48 hours has certainly been generous for some locations as you can see on the 48 hour rainfall map, courtesy of the OK Mesonet.

At any rate, look for below normal temperatures for several more days as you can see on our forecast page.  Wednesday actually looks to be mostly dry with only a slight chance of some drizzle or a sprinkle or two, primarily over the more southern counties at that.  We should also have at least a few breaks in the clouds tonight and into the day tomorrow, but a brisk NE wind will still keep temperatures quite cool.  In fact, morning lows will generally be in the 40s to near 50 and daytime highs in the 60s again.  If we do get to see a little more sunshine than projected, then some locations will make it into the lower 70s, but keep in mind our normal daytime high at this time of year is near 80.

Our next chance for rain looks to be Thursday, but the latest/greatest data runs have been trending drier for NE OK with most of that activity confined to the more southern counties and ending that night or early Friday morning.  As you can see on the 7 day QPF map, obviously the more southern locations are targeted with the heavier rainfall amounts and that will be largely due to the Thursday system.

After that, we look to be mostly dry through the weekend with only a slight chance of showers/storms by early the following week.  Also, the clouds and at least some rain together with an easterly wind component will keep temperatures quite cool again Thursday.  Some sunshine on Friday together with a more SE wind should get us back into the 70s followed by upper 70s to lower 80s for the weekend and into next week.

Looking further down the road, the 8-14 day guidance continues to suggest an active pattern along with warmer temperatures.  That would be more favorable for severe weather and since this is May could create some interesting situations during that time frame.