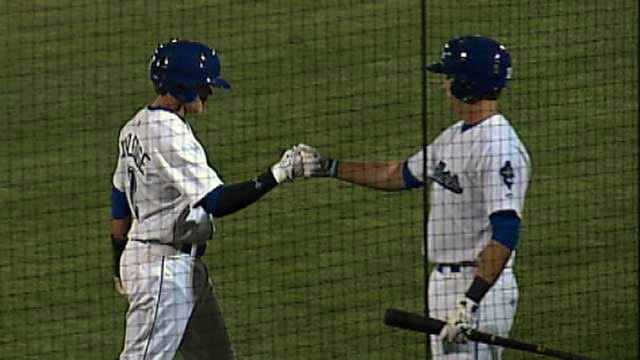 Tuesday night's game between Tulsa and Springfield began as a pitcher's duel where the score was tied after six innings 2-2. But baseball proved it cannot be scripted when the Driller bats went off for seven runs in the eighth inning as the Drillers began the second half with a 10-2 victory over the Cardinals.

Every Driller starter, with the exception of the pitcher's spot in the lineup, either scored a run or registered an RBI in the offensive showcase. Six different Tulsa batters also recorded multi-hit performances led by Ronald Torreyes, Jarek Cunningham and Lars Anderson with three hits apiece as the Drillers carved out 17 hits in the contest, one hit shy of their 2015 single-game high for hits in a ballgame.

The Drillers wasted little time getting on the board in the contest. Torreyes and Brian Burgamy hit back-to-back singles to begin the top of the first inning. It looked as though they might be stranded as the next two batters were retired. But Kyle Farmer came through with a two-out double to left that scored Torreyes. Burgamy was waved home but was cut down at the plate for the final out of the inning leaving Tulsa with a 1-0 lead.

Cunningham began his solid night at the plate in the fourth when he blasted a pitch from Springfield starter Andrew Morales into the bullpen in left-center. The solo shot was Cunningham's fourth homer of the year, extending the Driller lead to 2-0.

For awhile, that looked like that would be more than enough run support for Kehrt. The right-hander, who was recently announced as one of Tulsa's four representatives at the Texas League All-Star Game, started the game on fire as he set the Cardinals down in order over the first three innings.

But the storyline shifted in the sixth as Springfield broke up the shutout. After giving up a hit to the Springfield relief pitcher Kevin Hergert, Kehrt made his first mistake of the day as he threw wildly to first on a sacrifice bunt attempt to put runners at second and third. His second mistake came on the next batter as he unleashed a wild pitch to score Hergert from third. Former Driller Jeremy Hazelbaker then tied the game as he lined a single to left, evening the score 2-2.

Despite allowing the two runs in the sixth, Kehrt was solid overall as he struck out six Cardinal batters while not issuing a walk in his six innings of work.

Hergert and Drillers reliever Chris Reed traded zeros in the seventh before the Drillers bats exploded in the eighth against three Springfield relievers.

Tulsa loaded the bases with no outs before Peter Lavin began the scoring for the inning with a base knock to left. That hit unleashed the floodgates as Nate Samson, Yadir Drake and Burgamy all followed Lavin's lead with RBI hits of their own against Hergert and his successive counterparts. The scoring wrapped up when Jordan Swagerty uncorked a wild pitch to score Burgamy from third to make the score 9-2.

The seven-run eighth inning was the most runs scored by the Drillers in a single inning during the 2015 season. Their previous high mark had been six runs, which they achieved several times.

Kurt Heyer, the fifth Springfield pitcher of the day, handed the Drillers another run in the ninth as he fired the fifth wild pitch of the game to allow Cunningham to scamper home to put Tulsa up 10-2.

Jorge De Leon worked around some hits and walks in the eighth and ninth innings to finish off the Drillers win.

Reed picked up the win with his shutout inning of relief while Hergert was tagged with his first loss of the season.

The Drillers and Cardinals conclude their four-game series Wednesday afternoon as the Drillers try for the series win. The matchup will feature a clash of All-Star pitchers as Tulsa will send Chris Anderson (6-4, 3.68 ERA) to the bump where he will be opposed by Springfield's All-Star hurler Arturo Reyes (5-2, 2.45 ERA.) First pitch is set for 12:10PM.