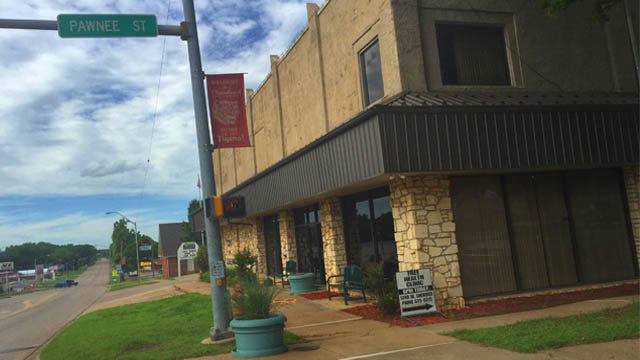 But one small-town police officer simply calls it his duty -- not as a cop -- but as a human.

If you've been on social media at all over the past couple of days, you may have seen a popular video of Cleveland, Okla., police officer Jeremiah Godfrey lending assistance to an elderly couple.

The video that has been viewed nearly 50,000 times and counting was a surprise to Godfrey, even though he had the starring role.

“That shocked me,” Godfrey said with a laugh. “Not only did I not expect someone to record me, but I never would have guessed something that simple would have gotten such a drastic response.”

To Lacey Fawcett, it was a moment worth preserving, and Oklahoma agrees with her, click by Internet click. As she sat in her car at the Homeland store, she did what most of us do in times of curiosity these days -- she hit record on her cell phone.

After the video made a round or two in social media circles in her Pawnee County community, the full story came out of the woodwork, but not from the officer's mouth, of course.

As anyone who has lived in a small town knows: You can be dishonest or modest, but either way, someone always is watching and everyone always is talking.

Click here to watch the video of Officer Godfrey

So on Friday, Godfrey was seen by others as he pulled over to help the couple cross the street near a busy intersection. As busy as a three-stoplight town can be anyway.

The elderly man was using a walker, and his wife was shuffling along behind him when he almost fell.

“It was about five blocks each way they had to walk," Godfrey said. "He was having trouble and her knees were bad, and not only that, I was afraid someone wouldn't see them and would turn a corner and hit them,” Godfrey said.

The couple ended up telling Godfrey and the sergeant on duty, Mark Smith, that they were new to town. Not only were they without transportation nowadays, but they didn't really even know where to go to buy groceries.

So Godfrey talked it over with Smith and opened his patrol car door and a can of kindness.

Then he drove the couple to the grocery store.

When they pulled into the store parking lot, that's when Fawcett decided to roll tape while she sat in her car.

Godfrey helped the couple out of the car one by one, unloaded the walker from the back seat and took it over to the gentleman. He shut his car door and followed them inside, then he asked the cashier to call him when the couple were ready to make the trip back home.

Like Godfrey says -- it was a simple, everyday gesture.

“I don't feel like I deserve any kind of special recognition,” Godfrey said. “This kind of thing is pretty common. Any time we see someone elderly or with special needs of any kind, we try to help. And even if we can't help that second because of an emergency, we make calls and get someone there who can. I think every one of the guys I work with would have done the same thing.”

It is something that the chief of police in the town says makes him proud. He doesn't need to look over his officers' shoulders, he said. They prove they are good men doing their jobs well.

“It's nice to know our officers are practicing that kind of thing just out of habit,” chief Clint Stout said. “I tell my officers, if you're driving around in a residential neighborhood and you aren't busy, if you see kids playing or anyone outside, stop and talk to them. Roll down the window and say, ‘I'm officer so and so, nice to meet you, what's your name?' See how they are doing. Connect with the community. People sometimes think the worst right away, like you are there to harass them, but then they realize that's not it at all. We care about our town and we care about the people in our town, that's very true. Not everything has to be about citations or putting cuffs on someone. A police officer wears a lot of hats in every city.”

Those hats are interchanged daily, whether folks are watching or not.

But this time, unbeknownst to Godfrey, all eyes were on him in that parking lot as he extended a hand to people in need.

You see, Godfrey was born in Dallas, Texas, but he has proved you don't have to live in the Sooner State your entire life to know how to practice the Oklahoma Standard.

In fact, you don't even have to be from a small town.

You don't have to be a police officer, either. And being in uniform really doesn't make a kind gesture like helping the elderly any more heroic.

People help people all the time -- regular folks of all ages and occupations.

What counts is the heart, and apparently, if someone armed with a camera is watching closely enough to brag about you to an infinite number of others connected to the Worldwide Web.

“I think that's why a lot of people get into this line of work, public service,” Godfrey said. “You have to think quick on your feet, every call is different. You could be helping an elderly person and in the next 30 seconds get dispatched to risk everything for your job.”

Godfrey is a tactically trained paramedic turned rookie cop. He has been driving back and forth to the Cleveland area from Henryetta for years to work with EMS, but he moved to Cleveland when he joined the police force there two months ago.

While his colleagues say they are proud of the humanity he showed to the couple new to town, the rookie did one even better last week, they said.

He saved a life.

That time, a little girl, just 3 months old and non-responsive, was on the receiving end of Godfrey's intervention and quick-thinking.

It was about 7 a.m., and he was directly dispatched because of his medic skills. The infant was blue when he arrived, Godfrey said. He administered CPR and the girl began to breathe on her own as the ambulance arrived. Godfrey and his fellow officers then gave the ambulance an escort to the local hospital, where the child was stabilized and flown to Tulsa.

He said the girl is considered stable now, but the last update he received was that she still is in serious condition. A dad to a 5-year-old girl himself, Godfrey said he thinks about her and wonders how the situation will end.

Godfrey's co-workers say his experience as a first responder hopefully turned that baby's mere weeks on earth into years more to grow. He said -- you guessed it -- he's just doing his job. Like he would out of uniform on his day off, he does his part for his community, he said.

“Not any different from anyone else,” Godfrey said.

True. Regular folks may do a lot of good deeds -- but not everyone is saving babies.

“It doesn't matter,” Godfrey said. “We're all out there working toward the same goals.”

And in Cleveland, where signs at the edge of town once declared it "Oklahoma's Friendliest City," officer Godfrey, fairly new to the place himself, gave some sweet old folks a great first impression of their brand-new city.

In the meantime, he gave his new city and tens of thousands of strangers a great first impression of himself.

“While I never expected this attention, and I don't really want it, I'm hoping it is a good thing for our department,” Godfrey said. “It doesn't have to directly be as much about me. Most police officers do this, and really, most people do it. You just never know how many cameras are out there these days, and that's actually not a bad thing.”