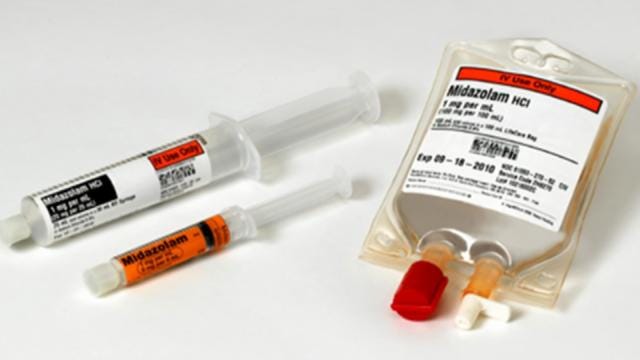 Exactly one year after a botched execution in Oklahoma, the state's new lethal injection protocol came under intense questioning Wednesday by a divided U.S. Supreme Court, with the pivotal justice, Anthony Kennedy, doing little to tip his hand.

Some of the strongest verbal fireworks came from justices Elena Kagan and Sonia Sotomayor, who wrote the court's dissent in an earlier failed bid to stay the execution of Oklahoma inmate Charles Warner.

At the heart of the case is whether midazolam, which is a sedative, can induce the same "coma-like state" in people that pentobarbital and other anesthetics have done during executions for decades. Inmates in the case argue that midazolam can leave inmates conscious during executions, exposing them to pain.

Kagan suggested that there was little evidence that midazolam, which Oklahoma began using as the first of three lethal drugs last year, will render inmates unconscious.

“That's not the world we live in,” Wyrick responded, noting that inmates who filed the lawsuit have the burden to show that Oklahoma's lethal injection protocol is unconstitutional.

Each side had one hour to present oral arguments to the justices, who frequently interrupted the attorneys and sometimes each other with questions. The courtroom was packed with reporters, some who had to peer around thick velvet drapes for a partial view of the justices.

Sotomayor said Wyrick had misconstrued expert opinions on the efficacy of midazolam, a sedative first used by the state in the April 29 execution of Clayton Lockett.

“Nothing you say or read to me am I going to believe frankly until I see it with my own eyes,” she said. She later said the state's experts on midazolam “didn't prove their point at all.”

Meanwhile, justices in the court's conservative wing were equally intense in their assessment of the challenge. They repeatedly asked Robin Konrad, an attorney representing the inmates, whether she thought the lack of alternative ways to execute inmates was relevant in the legal challenge.

Chief Justice John Roberts and Justice Samuel Alito noted that states have a diminishing list of drugs they can turn to for use in executions. Alito noted that is due to “abolitionists” pressuring drug companies.

“Is it appropriate for the judiciary to countenance what amounts to a guerilla war against the death penalty?” Alito asked Robin Konrad, an attorney who spoke on behalf of three death row inmates who filed the challenge.

Konrad, of the Federal Public Defender's Office in Arizona, replied that the issue before the court was whether Oklahoma's use of midazolam subjected inmates to an unconstitutional process.

“Oklahoma has just passed a new statute and they are constantly looking for other methods” of execution, she said.

Alito said the inmates' challenge appeared to be based on claims that the federal judge who upheld Oklahoma's process made several errors in his ruling.

“You want us to reverse a finding of the district court on the basis that it was clearly erroneous, is that right” he asked Konrad. “When was the last time we did that?”

Kennedy also asked Konrad whether it was relevant to the legal challenge that some lethal drugs are not available because of opposition to the death penalty. Kennedy said little else during the hearing to indicate where he stood on the challenge to Oklahoma's protocol.

In an interview after the hearing, one attorney for the inmates pointed to a comment by Sotomayor that perhaps the case should be returned to the federal district court for more hearings.

“This case was really rushed through and it was rushed through because the state insisted on seeking warrants (of execution) rather than allowing the case to progress in the normal course,” said Dale Baich, an Arizona attorney.

“Both sides were not able to develop the evidence and look at the experts and their qualifications," he said. "If that would have occurred, then there would have been a more robust hearing in the district court and we probably wouldn't be in this situation.”

Baich rejected the notion that inmates should come up with an alternative method of execution due to drug shortages or that they were trying to abolish the death penalty.

“Our clients are locked away in prison. They aren't abolitionists who are going around trying to stop the death penalty. They are all aware of what happened to Dennis McGuire and Clayton Lockett and Joe Wood,” Baich said, referring to three botched executions in which midazolam was used.

“If they are at a point where they will be executed, they don't want to experience unconstitutional pain and suffering.”

The justices' statements and questions will be parsed as court watchers try to determine which way the divided court is leaning on the case. Wednesday's arguments were essentially the same points that attorneys made in trying to win a stay for Oklahoma inmate Warner earlier this year.

The Supreme Court rejected that challenge in a 5-4 vote and Warner was executed Jan. 15 without any evident problems. However, the court later agreed to take up the underlying challenge from three inmates– Richard E. Glossip, John M. Grant and Benjamin R. Cole Sr.

The court's decision is expected in mid-June. It could affect Oklahoma and several other states using midazolam in their executions. A ruling in favor of the inmates could have a wider impact as states run out of alternative drugs.

The issue over midazolam intensified with the execution of Clayton Lockett on April 29, 2014, Lockett rose up from the gurney, mumbled and writhed. Witnesses watched Lockett move and mumble for several minutes before prison officials closed the blinds. His execution ended after 43 minutes and he was declared dead.

An investigation found that the medical team had improperly placed Lockett's IV line, resulting in the drugs seeping slowly into his tissue rather than the bloodstream. While rejecting the inmates' challenge to Oklahoma's protocol, a federal judge called Lockett's execution a “procedural disaster.”

In the current case, the court is considering three questions:

* Whether a state can use a three-drug protocol if a scientific consensus exists that the first drug “cannot reliably produce deep, coma-like unconsciousness.”

* Whether the state's protocol is “substantially similar” to the three-drug protocol at issue in the 2008 case, Baze v. Rees, out of Kentucky, in which the court upheld that method of lethal injection.

* Whether inmates must identify an alternate method of execution if the preferred method is not available. The inmates in the case raised this question because of language in Baze v. Rees that discusses whether a drug used in executions presents a risk of severe pain that is “substantial" compared with available alternatives.

As Schools Prepare For Fall Opening, Some Parents Take Concern With Plan Details

Mallory Thomas Health experts said one reason we're seeing an increase in the number of Oklahomans testing positive for COVID-19 is because more people are interacting with each other.
View More Stories