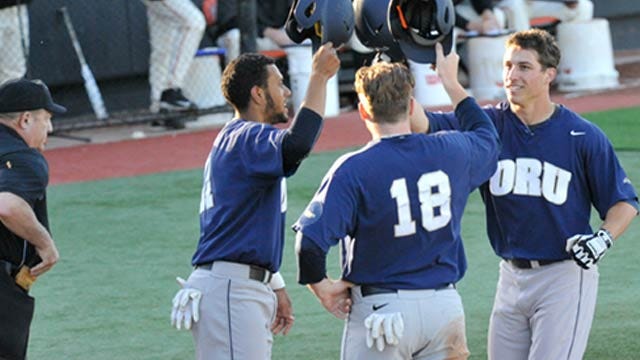 The Golden Eagles extended their winning streak to six games and have now won 15 of their last 16 games. ORU also goes 5-1 this season against teams from the Big 12 Conference.

ORU scored nine runs on seven hits that included a three-run blast to left field from Noah Cummings, his third home run of the year, as the Golden Eagle offense continues to roll. Matt Whatley started the game 4-for-4 which included a game tying two RBI single in the second inning.

Audie Afenir helped blow open the game in the third inning with a grand slam, his first home run of the season. Afenir finished 2-for-4 with six RBI and three runs scored while Whatley was 4-for-6 with a pair of RBI and two runs.

The bullpen for ORU was equally impressive holding the Cowboys at bay as Sean Leary got the final out of the first inning before pitching 4.1 innings to get the win. Leary scattered five hits and allowed just one run while striking out three to improve to 1-1 on the year.

The Cowboys were led by Dustin Williams who was 2-for-5 and a three-run homer in the first inning.

Noah Cummings' second inning home run put the Golden Eagles up 9-3 and capped a nine-run inning for the Golden Eagles. The offense continued in the third inning that was highlighted by Audie Afenir's grand slam.

Oral Roberts: Matt Whatley finished 4-for-6 to pace the Golden Eagles with two RBI. Audie Afenir had six RBI with a grand slam while going 2-for-4 with three runs scored.

Oklahoma State: Dustin Williams was 2-for-5 with a home run and three RBI.

Inside the Box Score

- The Golden Eagles have won six straight games and 15 of their last 16 games.

- ORU has now gone 5-1 against Big 12 teams including sweeps of Oklahoma and Oklahoma State.

- ORU has outscored their opponents 63-12 during the six game winning streak.

- Whatley's six RBI were the most since Anthony Sequeira finished with seven RBI at UALR on March 24, 2015.

- With 15 hits tonight the Golden Eagles have recorded 80 hits during the six-game winning streak, reaching double digit hits in five of the games.

- Oklahoma State opened the scoring the bottom of the first inning with a home run from Dustin Williams. Williams' blast put the Cowboys up 3-0.

- The Golden Eagles started their scoring in the second inning with a bases loaded walk to Chase Stafford scoring Audie Afenir who had also walked in the inning.

- The next batter, Matt Whatley singled through the right side to tie the game, 3-3 when Dean Wilson and Mason Mantle both scored.

- Matt Brandy followed with a RBI single to give the Golden Eagles their first lead of the game, 4-3.

- Afenir drilled a ball into center field scoring James and Whatley to put ORU up 6-3 before Noah Cummings broke the game open with a home run. Cummings blasted a three-run homer to left giving the Golden Eagles a 9-3 lead.

- Donnie Walton helped the Cowboys scratch a run across home in the bottom of the second when he singled home Ryan Sluder.

- ORU added to its lead in the third inning when Brandy singled home Stafford who started the inning off with a bunt single. Anthony Sequeira singled to center scoring Whatley before the Cowboys made their second pitching change of the game.

- Excitement for ORU continued with the next batter as Afenir cleared the bases with a grand slam to left center giving the Golden Eagles six runs in the inning and building a 15-4 lead.

- The Cowboys picked up a single run in the bottom of the seventh inning on a throwing error by ORU. The error allowed Williams to score after reaching on a single and cut the lead to 15-5.

ORU continues its road swing and returns to Summit League action Friday in Fargo, N.D. for a three-game series at North Dakota State. First pitch of the series is set for 6:30 p.m. Friday night.