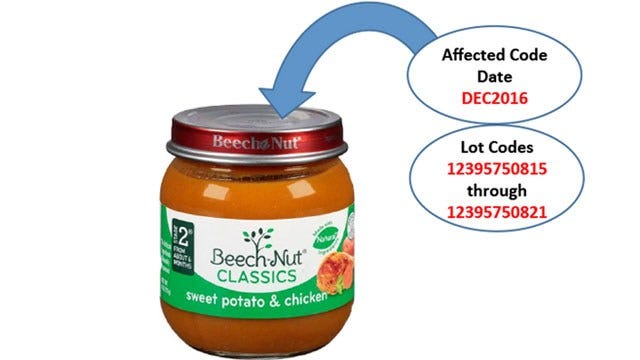 Beech-Nut Nutrition is recalling more than 1,900 pounds of baby food products because small pieces of glass may have gotten into the jars, posing a serious health hazard.

These items were shipped to retail stores nationwide. Beech-Nut says no other flavors or products are affected by the recall.

The USDA says the problem was discovered by a consumer who reported finding a small piece of glass in a container of the baby food. It says the company received one report of a person who sustained a mouth injury; no other details on their condition were released.

The USDA considers this a Class I recall, meaning it is "a health hazard situation where there is a reasonable probability that the use of the product will cause serious, adverse health consequences or death."

In a statement posted on its website, Beech-Nut said:

We have initiated a voluntary recall for our Classics Stage 2 Sweet Potato & Chicken following a single report of a small glass piece found in a jar of the product. Outside of this single report, we have no indication that any other jar of our Classics Stage 2 Sweet Potato & Chicken is affected, but as a company of parents and families we are acting with an abundance of caution.

The company says consumers can return jars of the recalled product to the store where they were purchased for a full refund.

Consumers with questions about the recall can contact the Beech-Nut Consumer Hotline at (866) 674-4446.