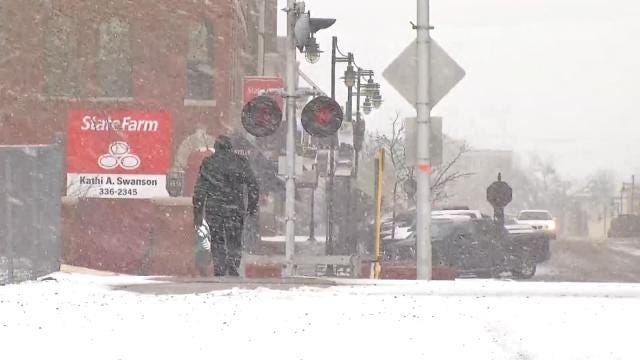 So far most of the winter weather problems have stayed away from Tulsa, but roads were troublesome in the morning and could become dangerous throughout the evening.

It turned out the worst time for driving so far, at least in Tulsa, was during the morning rush hour and earlier when children would normally be on the way to school.

There were a lot of problems when the freezing rain and sleet started Wednesday morning.

A Tulsa police officer broke his nose in a crash on the Broken Arrow Expressway near 129th East Avenue. The officer was helping a broken-down pickup truck when a sedan ran into them.

The driver of that car was taken to the hospital.

We know EMSA took at least one person to the hospital when several vehicles got tangled up in an accident on Highway 169, just north of 21st Street.

Another person was injured when a SUV got spun around on the B.A. at I-44.

Whether it was east Tulsa, midtown, or the Westside, it didn't take our crews long to find a driver in trouble.

One car slid off West 51st and rolled over. The highway patrol said seat belts saved the driver and a passenger.

A pickup truck slid off the road at I-44 and 161st and East Avenue, and ended up on its top. The driver wasn't seriously hurt.

The swarm of accidents slowed down as the day continued, and once the rush hour was over, the sleet decreased and more roads were treated.

We drove out to Sand Springs and found there was even less sleet out there and the roads were almost completely dry.

Most the highways were fine after about 11:00 Wednesday morning, but that was the combination of less snow than expected and a major effort by the city and state crews to put out salt and sand.

Without plowing they can cover more ground, so they were all over.

The lesser traveled roads, sidewalks and parking lots were slippery with a glaze of ice, but we saw people walking carefully and doing fine - even several people out on bicycles.

Bicycle rider, Steve Windsor said, "I've been getting around slow, real careful and I tell everyone, it's not as good as you think so be careful, it's slick."

"It's slick, but it's OK, everybody needs to walk in teeny little steps because the ground is unforgiving," walker Buddy Faye said.

The city of Tulsa will have their full crews out at least until midnight trying to clear off the roads and guard against any refreezing.

Folks who live east of Tulsa got more of the winter weather; and when the snow started falling steadily Wednesday night, road conditions began to change.

The worst of the weather hit between 11:00 and 12:30 Wednesday afternoon, that's when the roads really started glazing over with ice.

It was slick enough to send a driver spinning out into the median on Highway 20 between Claremore and Pryor. Fortunately he was not hurt.

When the salt and sand trucks started treating the roads it made a big difference in melting the ice that was accumulating; that was until the snow started to fall again, creating new ice patches.

ODOT said crews will work around the clock to keep up with the roads because the moisture will continue to turn to ice overnight.

While ODOT was prepared for winter, not all drivers were, like Jeremy Mueller who passed through Oklahoma on his way to Missouri from the warm beaches of Corpus Christi.

He was still dressed like it was sunny and 75, wearing a tee shirt, shorts and flip flops.

He said he hadn't really paid attention to the weather, so the ice and cold was a surprise to him.

There was some snow on the ground in Bartlesville as well, just enough to get Highway 75 wet but not icy.

Crews were out around 7:00 Wednesday morning and have been spreading sand and salt throughout the day.

There weren't many people out and about while it snowed, but we did find a few once it stopped.

Fastlane Manager, Jana Cotner, said she made sure her customers would be safe walking into her business.

“We prepare the parking lots, putting salt down and trying to scrape off the sidewalks and prepare for that so nobody slips and falls,” she said.

One family had a blast outside, sledding down a big hill near town. Although there wasn't much snow on the ground there was just enough for them.

"The kids were getting all stir crazy, so dad was like ‘let's go sledding,' I said ‘let's go,' so we got bundled up and headed out to our prime sled spot," Bartlesville resident, Erin Thompson said.

"I like we get to sled when you go by big snow piles, you jump off and you land in the snow," said 9-year-old Isabella.

In addition to the snowfall, the wind was also blowing really hard making it very cold outside.

Drivers have been urged to use caution if they have to get out.