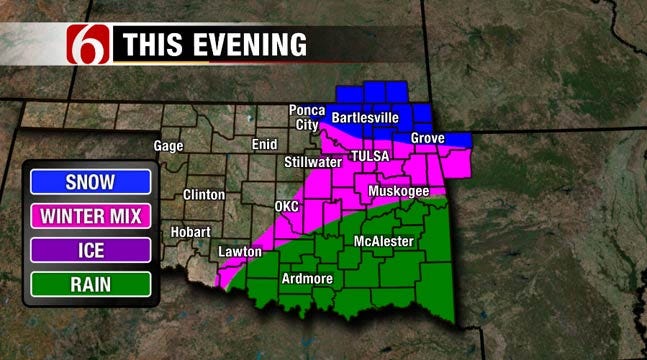 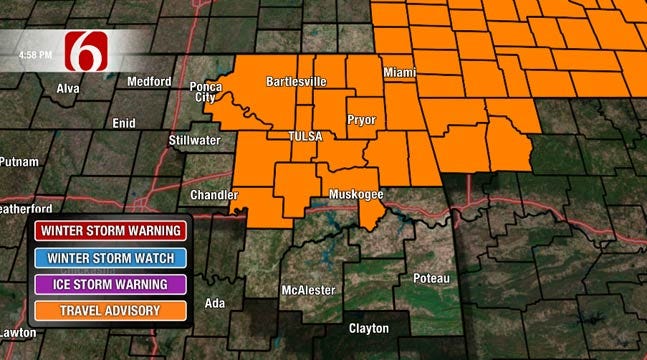 The National Weather Service in Tulsa has issued a winter weather advisory for several Oklahoma counties.

The advisory is in effect until 4:00 Thursday morning for freezing drizzle.

Benton, Washington, Carroll and Madison counties in Arkansas are included as well.

The NWS said areas of freezing drizzle have developed behind a strong cold front and said the drizzle is expected to continue south through Wednesday evening and into early Thursday.

News On 6 Meteorologist Dick Faurot said light snow and drizzle could accumulate on grassy surfaces, but said the system does not appear to be high impact and should move quickly.

He said the front will bring cold temperatures Thursday morning, highs in the 30s or 40s; but strong northerly winds could result in wind chill values in single digits.

Despite the cold start to Thursday, Faurot said sunshine should bring things back to normal Thursday afternoon and into the weekend.

“By afternoon, those winds will be returning to a more southerly direction and will be much lighter at only 5-10 mph. We will also have lots of sunshine for the afternoon hours,” he said.

Faurot said Friday morning will see temperatures start in the 20, but by afternoon should be well into the 60s.

Saturday and Sunday are expected to be even warmer, according to Faurot with lows in the 40s and highs possibly reaching into the 70s at times.