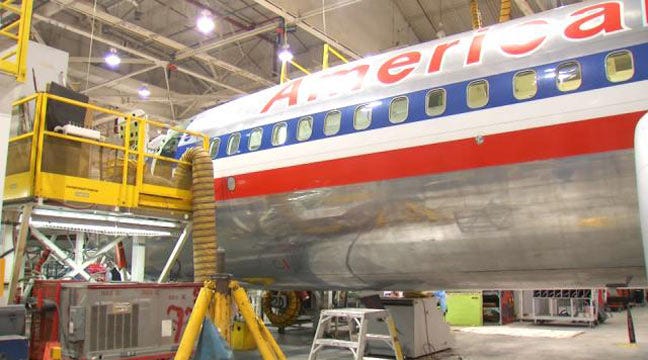 Major changes are coming for more than 100 mechanics at American Airlines' Tulsa maintenance base, according to the Transport Workers Union Local 514.

President Dale Danker told News On 6 the shop that works on engines has 155 too many people working in it. The reason is the company is buying new planes and replacing its old MD-80s. Most of the work on the company's MD-80s takes place in Tulsa.

"For the last two years we've been sweating bullets but we've managed to adapt," Danker said.

But Danker said there just isn't enough work on MD-80s anymore for all of the machinists and welders who work in the power plant building. As a result, 155 of them will have to move out into the hangar.

Some of the employees will be working in jobs with a lower classification, which means they could see their pay cut as much as $10,000 per year.

Read the union's notice to its members.

Many of the workers will be given the option to relocate to other American Airlines facilities around the country, but because they'd be making the same amount they're making now, Danker doesn't expect any of them to make that choice.

Danker said there's a chance that some positions will be cut. He said the union hopes to convince the company that the Tulsa base can do any work it needs and to stay active until the newer planes start requiring heavy maintenance in a few years.

Danker said the changes could take place as early as March.

An American Airlines spokeswoman released the following statement to News On 6 about the changes:

We are putting more aircraft overhaul work and component work into Tulsa to make sure that the base stays as efficient as possible. We also realize that retiring older aircraft and adding new aircraft means a change of work for maintenance. The plan, because some of the MD80 and associated engine work is on the decline, is to put other work into to Tulsa and this is what the company is doing. We will not need as many people in our engine shop for the amount of engine work that is anticipated. Some of these folks will see a difference in their income (not all 155) but understandably, for our employees who will see a reclassification, this will be difficult. However, all of the reclassification is completely done within our current contract.

American is committed to keeping our Tulsa facility as the Center of Maintenance and Engineering Excellence. But, that doesn't mean that there won't be some realignment every once and a while - that is in the normal course of business.