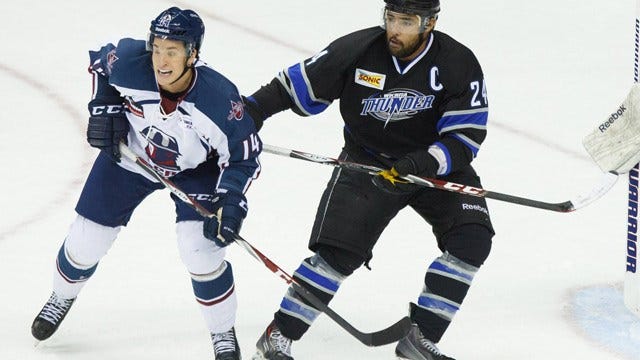 For the first time in six visits to the BOK Center this season, the Wichita Thunder were able to claim victory over the Tulsa Oilers. Thunder goaltender Tim Boron made 30 saves as the Oilers fell 2-1 to their rival in front of 5,027 on Wednesday night. Tulsa's run of five consecutive wins in the StoneWolf Casino Cup series was snapped but the Oilers still hold a sizable edge in the season series with a 6-2-0 record against the Thunder.

Boron's only blemish of the evening occurred at the 6:42 mark of the first period. A shot from Charles Lachance was stopped by Boron but the rebound deflected off Lachance and into the net. The fortunate bounce gave Lachance his third goal of the season and provided the Oilers with an early 1-0 lead. Tulsa held the advantage until the latter stages of the opening frame when a wrist shot from Thunder defenseman Kirill Tulupov made its way past Oilers goalie Kevin Carr to level the contest at 1-1.

After the Oilers failed to capitalize on three power play chances in the second period, Mike Wilson put the Thunder in front. Wilson received a pass from Eric Meland from the blue line and snapped the puck past Carr at 17:46 to give the visitors a 2-1 cushion.

Over the final 20 minutes, the Oilers outshot the Thunder 12-9 but were unable to solve Boron. In his last two starts, Boron has turned aside 54 of the 55 shots he has faced to give Wichita back-to-back wins. Tulsa's string of three straight games with a power play goal came to an end after an 0-for-6 showing with the man-advantage on Wednesday. In each of the last four losses, the Oilers have managed to score just a single goal.

Six of the eight meetings between the Oilers and Thunder have been decided by a single goal and the two clubs will not meet again until late February.

The Oilers close out a five-game home stand on Friday night at 7:35 p.m. against the Rapid City Rush on Garry Unger Night at the BOK Center. Unger, the Oilers' former head coach and NHL legend, will be honored in a pre-game ceremony and will be available to meet with fans during the first intermission.