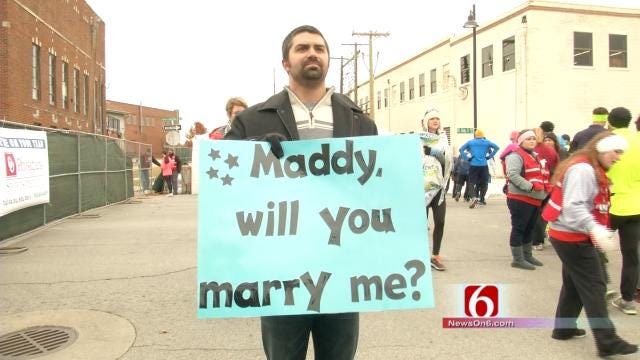 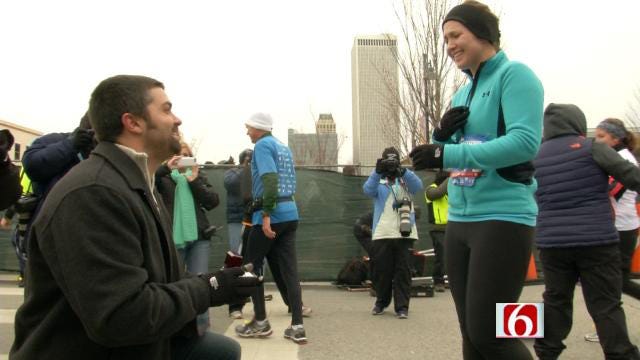 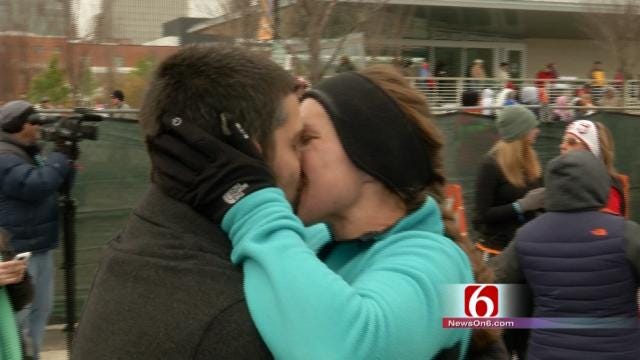 Kevin Andrews was a little apprehensive standing on the finish line of the Tulsa Route 66 Marathon. Thousands of runners were crossing the finish line, but he was waiting for one.

Girlfriend Madison Donica was running her second half marathon, never guessing that Kevin would be waiting with a sign that said, "Maddy, will you marry me?"

Andrews, a Norman resident, said he'd thought about asking Madison to be his bride on their anniversary earlier in the month. But friends and family liked "Plan B:" a finish line proposal.

"I knew she would least expect it after she runs 13 miles in the cold," he said.

Kevin was pumped on "nerves, excitement and coffee," waiting in the below-freezing temperatures. He checked his smart phone repeatedly. Madison was running with her mother and sister - and mom kept sending Kevin texts updating him on their location.

Madison stopped when she saw her boyfriend waiting at the finish line in Tulsa's Guthrie Green Park. She's known Kevin since they were kids. He was her brother's best friend, and now her best man.

"Yes!" she told him as he knelt down on one knee, as other finishers streamed by.

"I had no idea," she said, after an embrace and kiss.

"Those were tears of joy, that I was finished and that this was happening."