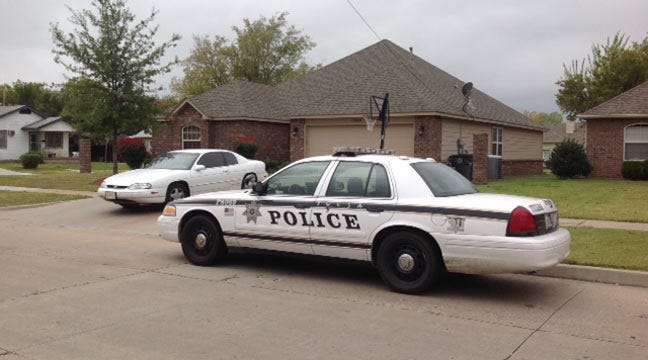 An armed robber abducted a Tulsa woman, forcing her to drive home so he could steal from her, police say.

When a neighbor intervened, he was robbed too, and then the suspect took off with the woman again.

She was not injured, police say, just shaken up after she drove the suspect to the 5200 block of North Garrison, where he jumped out.

He was last seen running away from there at about 11 a.m.

"This could have been any one of us, so we take things like this serious," said Cpl. Larry Edwards.

Tulsa Police converged on the house to look for evidence in the robbery, but it was just the halfway point in a woman's 45-minute nightmare.

It started near 4700 North Cincinnati, where the victim was visiting a relative, when she was robbed at gunpoint.

The suspect forced her to drive three miles to her house near Peoria and Virgin. She pulled in the garage and closed the door, and while the suspect ransacked the house, she set off a silent alarm that notified police and her husband.

When she didn't answer the phone, the husband called a neighbor.

"The neighbor came over to check on the house, the alarm. They walked around the perimeter, checked the windows and doors, when they opened up the garage door, they saw him standing there with a gun to her head," Edwards said.

Police say the neighbor was robbed, then the victim and suspect drove away with the neighbor behind them. They ended up about four miles away, where the suspect jumped out and ran.

Police searched the area with dogs, but couldn't find the suspect. They say they did find valuable evidence in the car and the house.

"They recovered some fingerprints and items the suspect touched, because we're going to send that to the lab and see if we can identify the suspect," Edwards said.

Police say the suspect is a black male, 17 to 20 years old, 150 pounds, wearing a black and beige jacket, baggy jeans and white shoes with a neon stripe.

If police know the identity of the suspect, they haven't identified him publicly.

They say the gun was a 9mm with a pink marking on it, and police say they've had a similar description of the weapon in several other serious crimes.