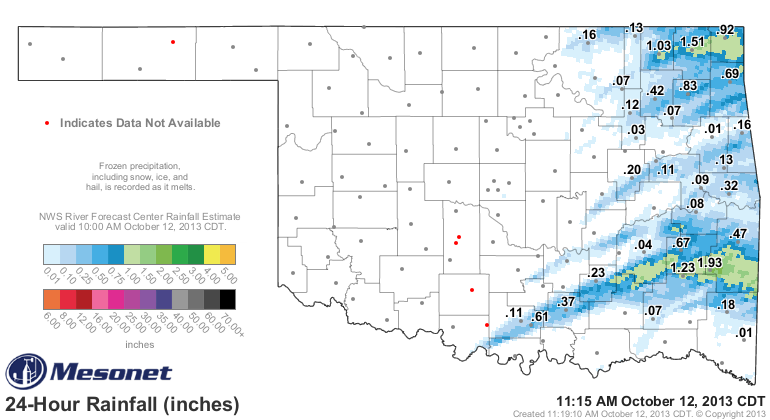 Those overnight showers/storms dropped some decent rainfall for some locations as the 24 rainfall map on the right, courtesy of the OK Mesonet, clearly shows. Now that the cool front which helped set off those overnight rains has moved on through, the rest of the day today and to start the day Sunday will be cooler and for the most part dry. The front will be stalling out along the Red River and a few showers/storms may re-form over the extreme SE counties later today or into the night tonight, but the chances are rather slim.

Not for long though as a stronger system aloft will be coming our way as we head into early next week and this system looks to be much wetter. In fact, the 3 day QPF (second map on the right) valid through Tuesday morning suggests the possibility of several inches of rain by the time it is all said and done. Keep in mind, this is an estimated areal average and some locations will get much more, others less but this has the potential to be a very wet system. Look for showers/storms to be reforming in far W OK late Sunday and Sunday night, then coming our way for Monday and ending on Tuesday. This all suggests our best chance of showers/storms will be during the day Monday and into the overnight hours before things start clearing from W-E later Tuesday.

Between now and then, the rest of the day today looks pretty nice with a brisk northerly wind bringing milder/drier air and a good bit of sunshine. However, as the next system gathers strength to our west, clouds will be on the increase later tonight and through the day Sunday. Also, our winds will be veering around from the brisk N/NE winds of today to a more NE/E component on Sunday and then more of a SE wind on Monday into early Tuesday. Gusty NW winds will then move in behind the stronger cool front as it pushes through the state Tuesday.

All these factors will have an impact on temperatures as well. Despite the brisk N/NE winds of today, it looks like the sunshine should still get temperatures well into the 70s this afternoon. Sunday morning will start off in the 50s, but the increasing cloud cover and the E/NE winds should hold daytime highs into the low-mid 70s at best. Cloudy skies and widespread showers/storms will likely keep temperatures pretty much in the 60s all day Monday. Tuesday will start off in the lower 60s but with the cool front arriving by the middle of the day followed by brisk NW winds and slow clearing, afternoon temperatures will struggle to make it to 70.

Some energy lagging behind the main storm system may keep some clouds and even a few isolated showers into the day Wed, but after that the rest of the week looks to be sunny and cool with morning lows in the 40s and daytime highs in the 60s.