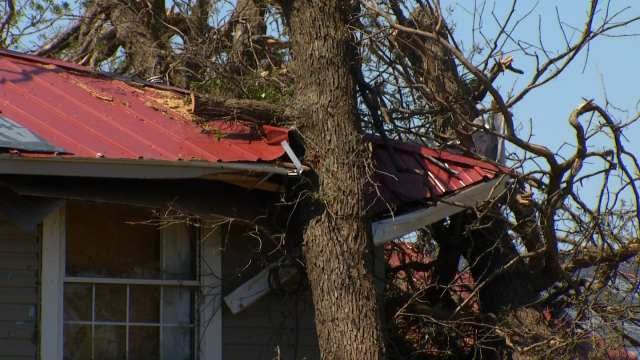 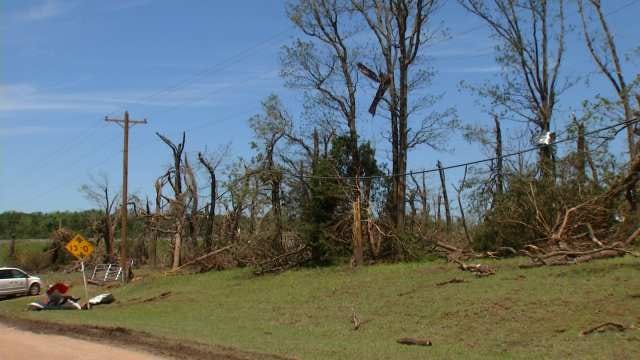 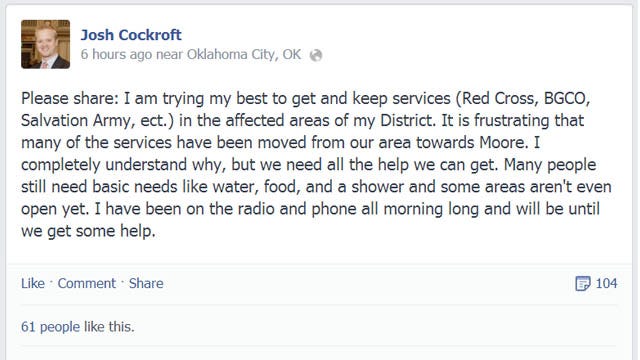 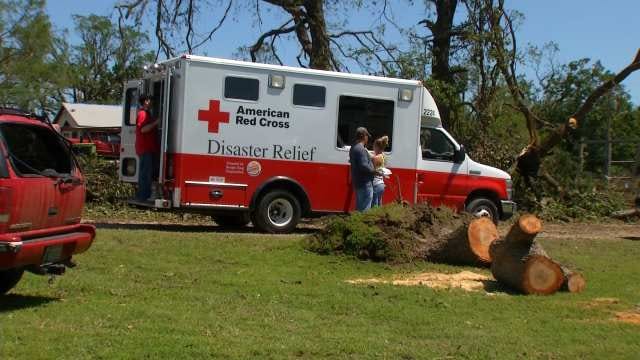 Storm victims near Shawnee are cleaning up a lot of debris after Sunday's tornado, which was on the ground for 20 miles.

It traveled from around Lake Thunderbird all the way to an area just north of Interstate 40.

It destroyed a number of houses, ripped apart trees and killed two people.

"It's terrible, just sickening to look at it," Gerald Kirkes said. "It used to be a scenic place. It's not today."

Much of the beauty on Kirkes' property was demolished -- along with his home.

He said it's hard to know where to start.

Not far away, Wesley Little and his family are also clearing debris, downed trees and power lines.

Thankfully, no one was hurt when the tornado hit.

"You could tell it was going to be a direct hit by the way it was coming," Little said.

Little's mom got out of her mobile home just in time to take shelter in her son's basement.

Eight people rode out the storm in the basement while Little's home was destroyed above them.

"It still just hasn't completely set in," Little said. "The place that I've lived for the past 25 years is gone."

Crews are working along a 20-mile path of destruction that starts near Lake Thunderbird and ends just west of Shawnee.

National Weather Service assessment teams still are surveying damage in several parts of Oklahoma. Preliminary data shows the tornado that caused damage in Shawnee was an EF4 twister with wind speeds from 166 to 200 miles per hour.

Relief organizations are helping victims who face a tough road ahead.

It will take weeks, even months, to clean up what the tornado damaged in an instant.

Rumors of Shawnee neglect have been rampant across social media this week. Among the confusion was information from a state representative who posted on his Facebook page Wednesday afternoon that his district was being ignored by major relief agencies.

"I am trying my best to get and keep services (Red Cross, BGCO, Salvation Army, etc.) in the affected areas of my District," posted Josh Cockroft, R-District 27. "It is frustrating that many of the services have been moved from our area towards Moore."

According to Shawnee President of the Salvation Army Board of Directors Mike McCormick, that information is inaccurate.

"All that is absolutely false," he said. "People in [the Shawnee area] are being helped, and the notion organizations are pulling out and heading to Moore is completely untrue. They have all been here from the beginning and are helping people. They are all here, and they are doing everything they can and more."

News On 6 was in Shawnee on Monday and Wednesday. On both days, we saw the major relief organizations pitching in to help victims.

If you are in the area and need assistance, the following venues offer help from the big organizations, as well as the Federal Emergency Management Agency:

For those in Carney, which is about 30 miles down the road from Shawnee, a Red Cross station has been active since Sunday evening at the Carney Senior Center, 301 Maple Ave. You can also find the Red Cross at the Absentee Shawnee Tribe Resource Center, 1970 156th Ave., in Little Axe.

"Those agencies will not move out of this area for several weeks," McCormick said.

That's not to say the area doesn't need additional, private volunteers. You can find extensive information about current needs by clicking to read this story in the Shawnee News-Star.