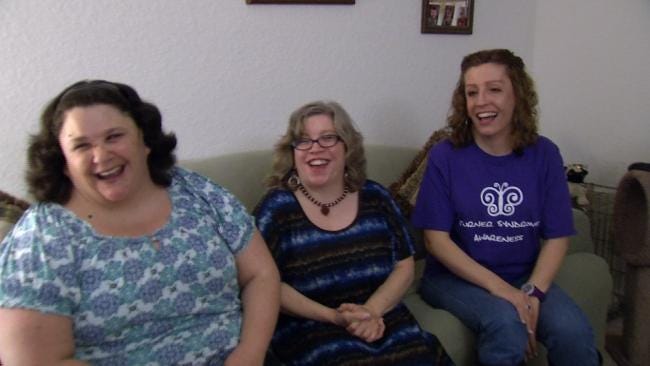 Three Tulsa women are opening up to help spread awareness about Turner Syndrome.

They all have the syndrome, which affects one in every 2,500 females at birth, yet few people have actually heard about it.

They call themselves "Turner girls."

"As Turner girls, you think you are alone because you've never seen anyone else, even though it's one in 2,500 births," said Stephanie Roberts.

Roberts, Misty Green, and Jenifur Davidson are bound by more than friendship. They all have Turner Syndrome.

"It's amazing how that one little chromosome affects your whole body, your heart, your kidneys, everything," Roberts said.

Turner Syndrome is a chromosomal disorder in which a girl's second "X" chromosome is missing in some or all of the body's cells. Turner girls are short, with puffy hands and feet and a webbed neck, among other traits.

It can cause medical problems later in life, from ovarian failure and heart defects to hearing and eyesight complications, so early diagnosis is critical.

"My mom, God bless her, was very proactive with my treatment," Davidson said. "The doctors in 1977 knew nothing about it, so she had to do all of the research herself."

These women are all part of a Turner Syndrome support group in Tulsa. They say they want young girls to learn from their experiences.

They also have a message for parents.

"Don't be scared. Your daughter is going to be fine as long as you are proactive in her treatment and get her the medical treatment that she needs," Davidson said.

With a good support system, a woman with Turner's can live a happy, healthy life.

The Turner Syndrome Society will have a booth set up at the fairgrounds next weekend for the Tulsa Living Women's Expo. They'd love for you to stop by and chat with them.