6 On The Move: 3 KOTV Personalities Who Brightened Our Days On The Movie: 3 KOTV Personalities Who Brightened And Illumined Our Day 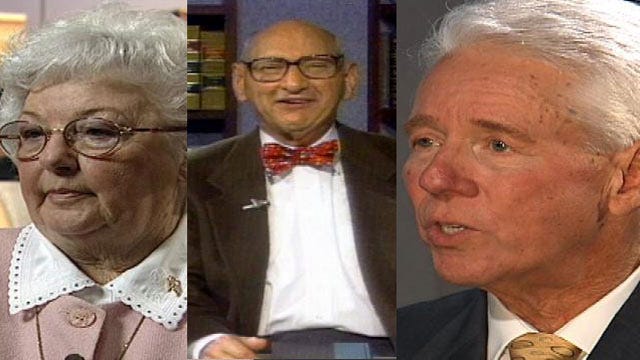 As News On 6 makes the move to the new Griffin Communications Media Center in the Brady Arts District, we look back at our history - 63 years of reporting news to the people of Oklahoma.

Our old headquarters at Third and Frankfort has been home to some of Oklahoma's most beloved TV personalities.

Some who have kept us informed, kept us safe, and always kept us smiling.

"You know, I think it's wonderful that our city merchants come to Mayfest with all kinds of wonderful food," said Betty Boyd.

Betty Boyd was the sunshine that brightened our broadcasts.

Before she became a state lawmaker, an author, or one of Oklahoma's most recognizable pitchmen, Betty was a pioneer.

"KOTV gave me a wonderful opportunity and bless their hearts; I don't know why they did it. Because I had no training no talent. I didn't have anything but a gray streak in my hair, and I guess they thought that was cute. I'm not sure," said Betty Boyd.

Just as KOTV was signing on the airwaves for the very first time, Lewis Meyer was opening his Peoria bookstore. The Ivy League graduate spent time educating Oklahoma's own among the stacks and in front of the cameras, hosting "Lewis Meyer Bookshelf."

"This is Mary Ann Wilson's brand new book. It's called 'Illuminata', and that means 'seeing the light''," said Lewis Meyer.

"The more books you read, the taller you grow!" said Lewis Meyer.

Witty and insightful, and an author himself - Lewis penned seven books including a best-selling memoir. The serious scholar, who never took himself too seriously.

Lewis spent 40 years on air at KOTV inspiring Oklahomans to become bookworms, and sharing the knowledge found on the page.

Jim Giles shared a different knowledge - one borne out of science. As an Air Force weather commander, Jim's forecasts held life and death consequences for pilots in Vietnam.

Becoming KOTV's Chief Meteorologist in 1981, Jim was on the cutting edge of technology,  introducing Green Country to innovations like Doppler radar and Pathfinder.

"I feel like First God, then Jim Giles and Pathfinder responsible for saving my life and other lives," said Shirley Butler, tornado survivor.

Often the only calm Oklahomans found during severe weather, was the steady reassurances from Jim - who promised to see us through the storm.

It was Jim who brought Terry Hood to Channel 6 to do the weather back in 1987. Terry sat down with Jim before his retirement in 2006.

"How would you like to be remembered here?" said Terry Hood.

Never content to stay in the weather center, Jim was a mainstay at Tulsa's Oktoberfest celebrations. He helped thousands of children shake the chill of an Oklahoma winter with his "Giles Coats for Kids" drives.

And at his final Channel 6 broadcast, Jim helped illuminate Rhema Bible College, flipping the switch on a beloved Christmas tradition.

Jim's light illumined us all. Lewis's brilliance enlightened us. Betty's radiance brightened our lives. And the legacy they built here will continue to shine.

Watch Videos From The KOTV Vault

6 On The Move: 3 KOTV Personalities Who Brightened Our Days