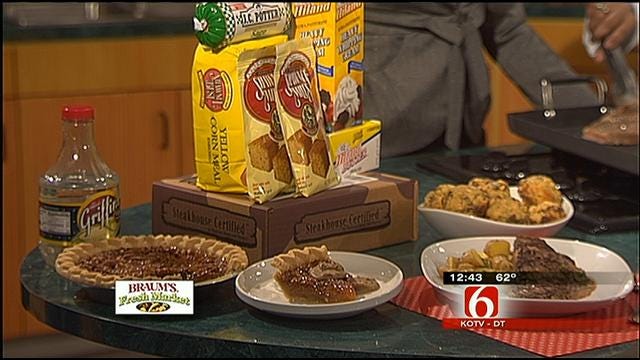 One and one-half cups boiling water

To prepare mushroom pan sauce, place dried mushrooms in a bowl and combine with boiling water. Set aside for five minutes and then drain in a colander.

In a medium saucepan, melt butter and sauté shallots until soft. Add red wine, beef broth, mushrooms and simmer for about five minutes until sauce reduces to one-third of the volume. Set aside and grill the steaks while sauce is cooling.

Place steaks on grill rack about four to six inches from the heat source. After five minutes, flip steaks and continue cooking until desired doneness. Test doneness using instant heat thermometer. For the highest level of food safety, the internal temperature should be at least 160 degrees. Keep steaks warm while finishing the cream sauce.

Add three-fourths cup heavy cream to sauce mixture in the pan and return to stove for warming. Spoon mushroom pan sauce over steaks and serve with chive potatoes.

In a large bowl, combine butter, chives, pepper, salt and blue cheese crumbles, and set aside.

If desired, with a channel knife, cut two intersecting strips around middle of each potato. Cover potatoes with cold water in a five quart saucepan and one teaspoon salt. Simmer uncovered until tender, about 20 minutes.

Drain potatoes in a colander and place in a bowl. Toss with butter mixture, and serve warm.

Prepare Shawnee Mills Cornbread Mix according to package directions, making two pans of cornbread. Let cool, then in a large bowl, stir and tear the cornbread into crumbs.

In a large sauté pan, cook sausage, onion and celery over medium heat, stirring to break up sausage. Cook until sausage is browned, then drain.

Take mounds of dressing, either using your hands or a large ice cream scoop, making balls to fit into a greased standard 12-cup muffin pan. Each scoop should generously fit into the muffin cups.

Remove each muffin from pan, using a spoon or the tip of a knife to gently remove each. Let them cool on a cooling rack.

Remove Field's Pecan Pie from box, and set aside.

In a deep-sided saucepan or Dutch oven, heat sugar and corn syrup on medium-high heat. Cook, while stirring, until it comes to a boil. Turn heat to low, then quickly add butter and cream. Cook another five minutes on low heat, stirring occasionally. Remove from heat, and stir in pecans.

Pour topping over pie. Store in refrigerator until serving.