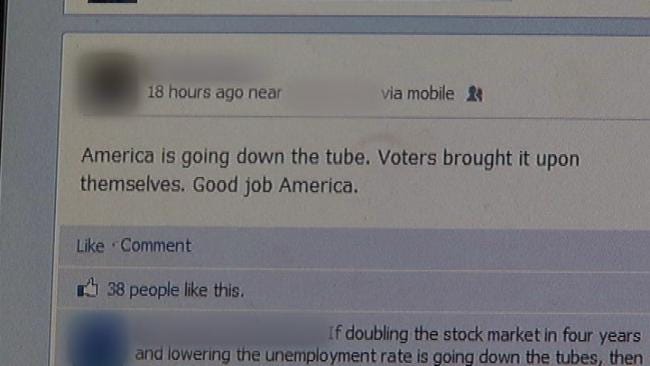 Even with the election behind us, the political rhetoric has cooled only slightly.

You really can't log into any of social networking site without being bombarded by political talk, whether it's one side bragging, or the other side bashing, some users with election fatigue are pleading for their friends to just move on.

The election may be over, but the debate goes on.

"The Facebook—I think it's exploded even more today," said Brian Hoover, from Tulsa.

Over the past year, many Facebook users turned into political pundits

"Every post on there has been about the election and people getting all fired up, acting like the world's gonna end," Hoover said.

Differing opinions, bickering over whose candidate is best, and, in some cases, flat out disrespect, have put those cyber friendships on the line.

"It's really easy when you're typing at a computer screen to say whatever and not necessarily remember that that's your friend on the other end," Simcoe said.

Simcoe said she hasn't lost any friendships over Facebook just yet, but she is fed up with a number of users popping up on her feed.

"There were a couple of people that were, just all the time, mean and ugly and yucky, and I just unchecked show in my news feed," Simcoe said.

On Election Day, Simcoe says she matched every nasty political post with something completely unrelated to the election.

"It was everything from my cat to my chickens eating ants in the yard to what we ate for lunch," Simcoe said.

And while the political passions were enough to send some over the edge, that wasn't the case for Lyuda and Irina Nareko.

The girls are originally from Kazakhstan, where they say they don't have the freedom to voice their opinions like Americans can.

"People are so supportive of America. That's nice to hear and see, that they actually know what they want," said Nareko.

According to a recent survey, nearly one-in-five admit to blocking, un-friending or hiding someone on social media site, because of their political postings.

We've gotten a lot of feedback from some of our Facebook friends about the political ranting.

One woman says she's deleted several people, even a few family members, who have taken it too far.