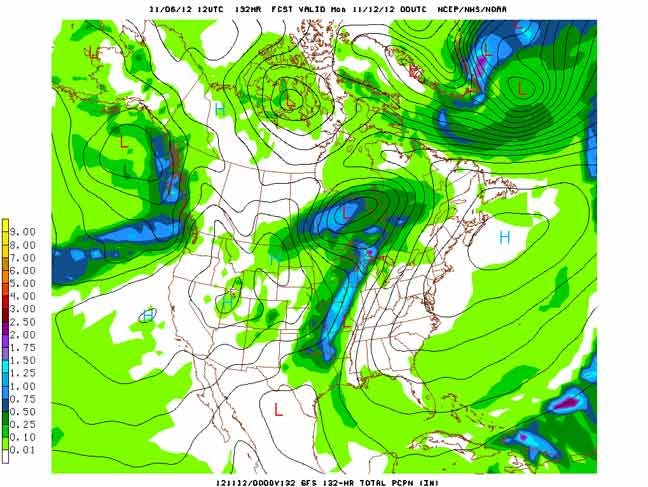 Starting to get a little more optimistic regarding our rain chances for this coming Sunday. The map on the right is generated by one of the computer models that we use, in this instance the GFS(Global Forecast System), and the display is for the 24 hour accumulated precipitation ending at 6 PM Sunday. Keep in mind, this is raw computer output without any manual enhancements; but it clearly shows some decent rainfall totals, particularly for the E side of the state. Now, as has been stated before, don't get your hopes up too high as this may change over the next few days, but it certainly looks promising at this time. I should also point out that this is also consistent with what the ECMWF guidance is indicating for Sunday which lends greater confidence that we will get at least some rain out of the system. I should also point out that this will not be a drought breaking rainfall event by any stretch, but does have the promise of providing at least some badly needed rainfall for much of the state.

The system that will bring those rains is still out in the Pacific at this time which is the reason for caution and not getting ones hopes up too high as lots can change when better data becomes available over the next few days. However, it also bears mentioning that the guidance over the last few days has been consistently producing rain for us with just some relatively minor timing issues.

Between now and then, we will have another mild day on Wednesday with light NE winds, lots of sunshine and temperatures pretty close to normal. That will be followed by increasing southerly winds for Thursday which will become quite strong and gusty on Friday and Saturday. That in turn will result in even warmer temperatures with highs in the 70s and lows moderating into the 50s or lower 60s. Depending on cloud cover, some locations, particularly in the more western counties could be near 80 by Friday.

Speaking of cloud cover, those strong southerly winds will bring low level moisture back into the state so the sunny skies of the next couple of days will likely be replaced by a stratus deck for much of Friday and mostly cloudy skies for Saturday. A few showers will be possible on Saturday ahead of the main storm system aloft, but Sunday still looks like the main show. Showers/storms should be widespread as a strong cold front will be pushing across the state during the day. There are still some minor timing issues to be resolved, but it appears that Sunday morning will likely be in the 60s followed by falling temperatures that afternoon as the winds shift to the north behind the cold front.

The rains should have ended by Monday morning and early next week will then be quite cool with highs in the 50s and morning lows near freezing.