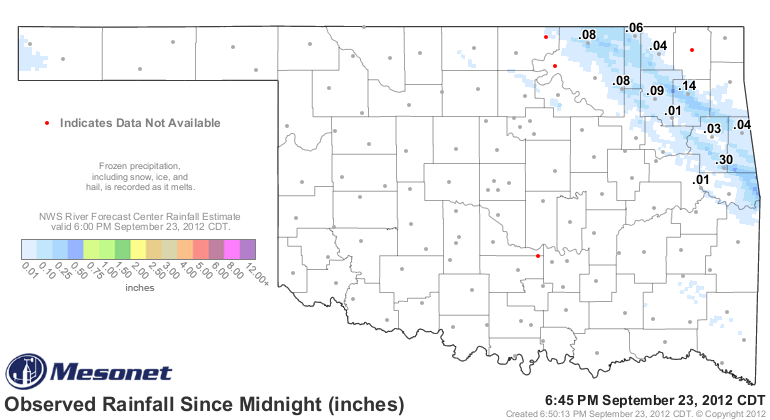 It did not amount to much, but as you can see from the rainfall map on the right, there were a few showers and even some thunder this morning. The same sort of thing may occur later tonight and into the morning hours of Monday when a few isolated showers may pop up, but they are not expected to amount to much either and we will be left with a good bit of sunshine for the balance of the day. Any overnight showers will be due to the nocturnal low level jet cranking up and a warm front that will be quickly moving back northward. Since there is not much moisture to work with, the chances of any one location receiving measurable rainfall will be less than 20%.

Hope you have enjoyed the milder weather for this first full day of autumn. Unfortunately, the next couple of days will be more like summer. A SE wind and some clouds returning overnight should keep early morning temperatures from dropping off any more than around the 60 degree mark. That is not a bad start, but as the day wears on, S to SW winds will be rapidly increasing in speed with gusts of 25 mph or more by afternoon. We should have enough sunshine by then together with those strong, gusty S/SW winds for afternoon temperatures to reach the lower to possibly even the mid 90s. Couple that with a minimum afternoon relative humidity of less than 30% and the fire danger will be a major concern for Monday.

Tuesday will also be much warmer than normal and quite windy with gusty S to SW winds along with temperatures in the 90s during the day under partly cloudy skies. However, the dew point should be somewhat higher resulting in somewhat higher relative humidity levels. The fire danger will still be elevated though. Also, Tuesday morning will start off quite warm with morning lows only dropping into the 70s as brisk southerly winds will continue through the overnight hours.

After that, a frontal boundary is expected to be nearly stationary just north of us in Kansas and the pattern aloft will be more supportive of at least chances of showers/storms; some perhaps as early as late Tuesday or Tuesday night. With the boundary to the north, our more northern counties will have the better chances of rain into the day Wednesday but there will also be chances area wide for the rest of the week and into the weekend.

The longer range guidance is still not showing a lot of consistency so there remains more uncertainty than usual in the extended portions of the forecast. One of the causes of uncertainty is tropical storm Miriam on the Pacific side. It is expected to recurve and move into N Mexico over the next few days. The moisture from Pacific tropical systems can, at times, be significant rain makers for us. One of the longer range suite of products suggests we may end up with some decent rainfall later this week, but other guidance is much less optimistic. So, will take a wait and see approach and maintain at least a chance of showers/storms for the middle to latter part of the week with the understanding that this could turn out to be a rather active period. We can sure use the rain.