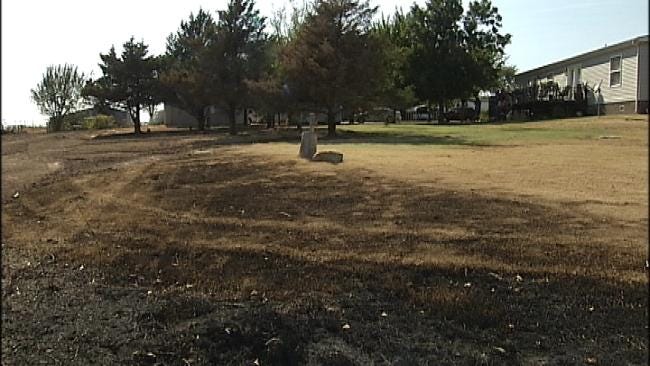 A Green Country evangelist is sending out a message of hope after a wildfire swept across the field behind his home last Saturday evening.

But it stopped short, he said, deterred by a small-wooden cross.

High atop a hill that overlooks the small town of Drumright sits a symbol that George Brock said saved his home from the fire.

"The rock represented Jesus, who we could stand on and the cross was what we were supposed to cling to," Brock said.

Now, it's a message that Brock is clinging to more than ever before.

Brock spent last Saturday night handing out water to those helping with the wildfires, which, at the time, were about a half mile up the road from his house.

"I turned, looked up the hill, and the flames were heading our direction, so I thumbed a ride," Brock said.

When he arrived home, he saw flames as high as 75 feet had surrounded his home with his wife inside.

"I walked in the house and I said, ‘Honey we've got to go immediately,'" Brock said. "She got in the car, we drove off, got the bottom of the hill, looked back, and it looked like an inferno and then shortly after that, we were notified that we'd lost our homes."

Certain he was homeless, on Sunday morning Brock made his way back to the place he called home.

He prepared himself for devastation, but found instead what some might call a divine intervention.

"It had leaped over the house, crossed the front, went all the way over the highway, and the rest is history," Brock said.

His home was still standing, touched only, he said, by the hand of God.

"When I looked across, behind the cross itself, and saw all the blackened fields, and in front of the cross, the green grass of our yard, it was just a reminder that people have to make a decision as to which side of the cross they want to be on," Brock said.

Brock said churches statewide have heard his story and have sent in money to help his community.

You can help too. Click here to donate to his cause.