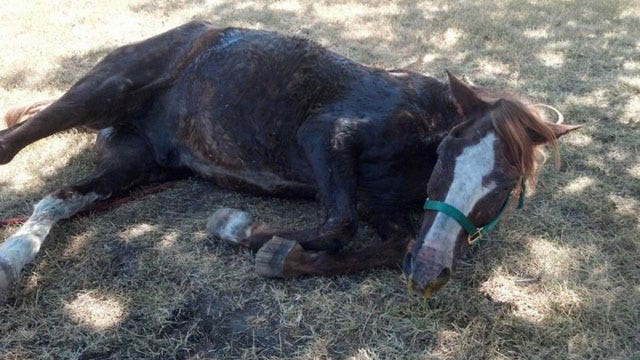 People aren't the only ones suffering from the devastating wildfires across Green Country.

Many livestock and pets were left behind as owners evacuated their homes and more than 90 square miles burned to a crisp near Mannford over the weekend.

During the mandatory evacuation of the town, some owners had enough warning to load up trailers with livestock, while others simply had to cut fences to allow animals to escape flaming pastures.

Some animals weren't so lucky.

An Oklahoma Department of Transportation worker who was helping with road closures near Mannford reportedly saw horses that had busted through barbed-wire fence and were running down the highway, literally on fire.

Cleveland's Brenda Williams with the Oklahoma Rescue Rangers has been working to save and give shelter and food to animals left behind in Creek County.

OK Rescue Rangers has been in existence for about two years, and Williams has been a part of the rescue community for over 22 years, even transporting dogs out of the Hurricane Katrina wreckage and Joplin tornado aftermath. She specializes in dogs that have been abandoned, but with the far-reaching fires, she's taking on rabbits, cows and horses.

"I even tackled a goat," Williams said. "If people call me about an animal, I'm going to bust my butt to save it."

Not all were mistreated or abandoned, but in a fast-moving blaze, there's only so much a rancher can do. Some homeowners weren't home when the fires hit, and with highways closed, there was no way in to rescue their own pets.

With help from Mark Sparks and Ryan Griffith of the Oklahoma Highway Patrol and Creek and Pawnee County officials, Williams has been able to get to fire-stricken property to save animals and livestock.

Williams' crew, which is comprised of about three people, has taken on hundreds of displaced and burned animals, including cattle by the herd. Many have been reuinited with owners.

"Most of the owners have made arrangements, but their pastures are burned up," she said. "They have nothing to feed them for the winter, and with hay at a premium because of the droughts, this is just so devastating."

Creek County officials said more than 200 homes burned over the weekend, and when animal owners reduced to living in tents, it is difficult for them to provide for the critters.

"There was a grown man at the Mannford pound crying because he lost everything and couldn't find his dog," Williams said. "Another couple lost a $175,000 home and all they could get out were their Chihuahuas. Animals are really like the only lifelines for some of these people."

Among the many critters Williams has taken on, one Creek County dog, a mutt, has four burned paws and a litter on the way.

"Brenda has done a lot for animals around here, and she's just been working constantly," Pawnee County Director of Emergency Management Mark Randell said. "She's not going to turn her head. She's got such a good heart."

Williams said she rescued a burned horse, which had been badly starved before the fire.

"We sat with it for three-and-a-half hours, working on it with the vet," she said. "We finally had to euthanize it. If it hadn't been starved, we could have saved it. I finally made the call because I couldn't watch it suffer anymore."

The Oklahoma Rescue Rangers is funded solely by donations and money Williams uses out of her own pocket. The organization holds one big fundraiser each year, but $7,000 raised at the annual June poker run is nearly exhausted two months later because of the wildfires.

"We're just a small organization, not like some of these national groups," she said. "And in a couple weeks when the big guys are gone back to the big cities, we'll still be here saving animals and feeding them and getting them vet care. It's going to take a long time before this is over."

To help in the effort or to claim a displaced animal, you can reach Rescue Rangers at  918-704-6903 or visit its Facebook page.