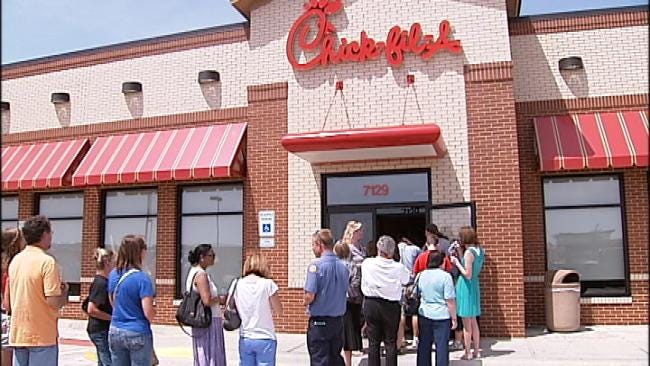 Lines at Green Country Chick-fil-A restaurants on Wednesday wrapped around the buildings and down the streets.

The president of the fast food restaurant chain recently came under fire for saying he did not support gay marriage.

The turnout locally was huge for Chick-fil-A appreciation Day. A few others were there in protest.

We checked out the restaurant at 71st and Garnett in Tulsa.

Protester Tiffany Smith said, "I'm a lesbian and so it really, it was really hurtful to me to see so few protestors and so many people in line."

When asked a question by a reporter last month, Chick-fil-A president Dan Cathy answered, "We are very much supportive of the family—the biblical definition of the family unit. We are a family-owned business, a family-led business, and we are married to our first wives. We give God thanks for that."

Gay rights groups and others answered with calls for boycotts.

Some politicians have spoken on the issue, either encouraging people to show support by buying food at Chick-fil-A today or by publicly boycotting the restaurant.

Supporter of the restaurant, Curt Gwartney, said, "We drove 45 minutes from home and stood in line for 45 minutes in order to come support Chick-fil-A and the Cathy family."

Opponents of Cathy's stance have planned "Kiss Mor Chiks" for Friday, asking couples of the same sex to show up at Chick-fil-A locations and kiss each other in protest.