Tulsa police said a man threatening a woman with a pellet gun as he drove crashed his truck into a bridge on the Broken Arrow Expressway.

The wreck happened near the 15th Street exit at about 9:15 p.m. Saturday.

The driver has been identified as 37-year-old Alfredo Gonzalez.

Tulsa Police Officer Wesley Anderson said that during the course of a domestic argument, the man pointed a pellet gun at the woman. She was trying to take it away from him when he hit the bridge, Anderson said.

Police say the man ran off, but witnesses to the crash chased him down the embankment, tackled him and held him down until authorities arrived.

The driver was taken into police custody, and he and the woman were both taken to the hospital.

The woman in Gonzalez's car told them he threatened her with a knife, forcing her to get into his pickup truck.

Gonzalez, who is being held for Immigration Customs Enforcement, was booked on complaints of kidnapping, assault with a dangerous weapon, pointing a firearm with intent, possession of a firearm by a felon and resisting arrest.

Anderson said Gonzalez had "a significant laceration" on his face. He believed Gonzalez was driving under the influence; however, the arrest and booking report does not include that complaint.

Westbound traffic on the expressway was affected for about an hour. 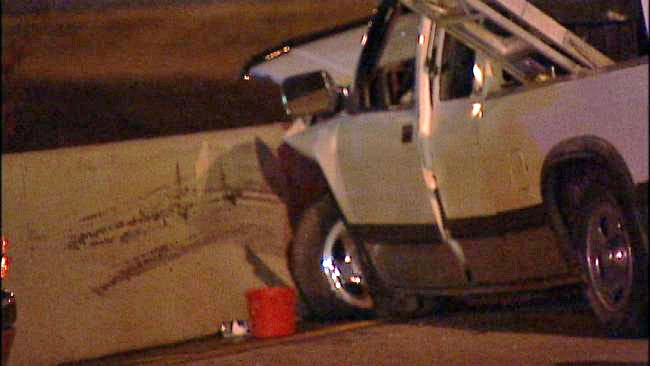