Bobby’s Blog: Thunder vs. Heat, A Dialogue Between Brothers 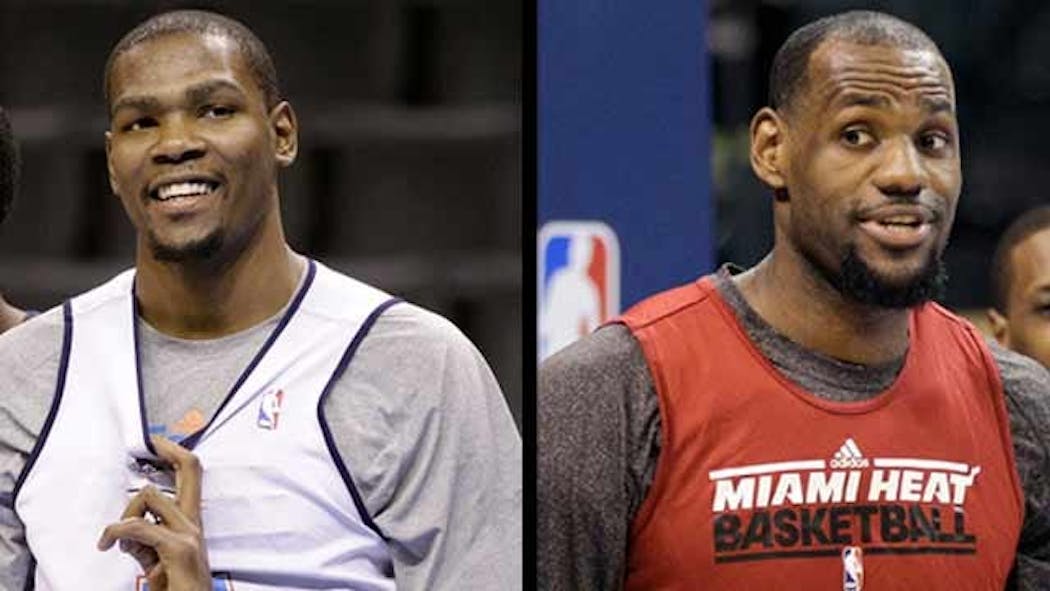 BOBBY:
"Hey Miami-resident brother. Riddle me this: Durant or LeBron? I know you are a huge KD guy, which surprises me because you have never stepped foot on OK soil but LIVE across the street from LBJ. Is your love for Durant more of an anti-LeBron thing? I am all for KD, too, but I think that has more to do with me seeing him more often than I see LeBron and being routinely wow-ed by his seemingly endless talent.

STEVEN:
"Well, don't we all watch LeBron? I mean we're all "witnesses," correct (cue scoffing sarcasm)? This is an extremely loaded question, one that contains many layers, some of which having nothing to do with basketball. Let me just clearly state that I'm a much more valiant supporter of Durant than I am a staunch detractor of LeBron, and this so due to my objective observation of both players. Yes, I live 3 minutes away from American Airlines Arena, but I did not grow up in Miami. I don't suffer from the neuroses of Miami "homer-ism," which is a common (even expected) condition that most of the fair-weather fans here suffer from, where they will defend LeBron and their beloved Heat through every one of his fourth quarter disappearing acts. Likewise, I've never even been to Oklahoma, so my opinion on the two men comes from a completely unbiased place.

My preference towards Durant is rooted in my love for watching him play. On a superficial level, I enjoy watching Durant play more than I like watching LeBron. There is simply nobody like Durant. He's a 6'9'' freak of a man (who's exactly my age, by the way) who moves with tightrope precision, and a singular scoring focus. He is far and away the most offensively skilled player in the game, for he's as comfortable going to the rim as he is hitting a 38 foot shot.

Now, I am in no way saying that Durant is as physically imposing as LeBron. Number 6 is a locomotive, a freight train perpetually running up and down the court. But the fact of the matter is that LeBron is not as skilled as Durant, mostly because he doesn't have to be. Because of his unparalleled size, LeBron can physically dominate a team with ease, as indicated countless times. However due this dominance, he never had to establish and cultivate the offensive repertoire that Durant so gracefully displays on a nightly basis. James will never have the outside game, the ball handling abilities, nor the jump shot of Durant. Personally speaking, I place a greater value on skill, something that must be developed, over genetic superiority.

Here's my question to you:

Isn't it interesting that these two basketball players couldn't be any more different? Or at least that's the given perception they've given to us-the perception being that one is continuously preoccupied with his "brand", while the other one cares solely about winning. Just look at how they handled their last free agency signings. James lands a television special, and KD merely tweets his contract extension with humility and grace. Kevin Durant seems like a kid who loves to play basketball, who was born to put the ball in the basket. LeBron utilizes his skill set so that he can create opportunities beyond the game itself, or at least that's the perception he exudes. At this point in his confounding career, winning a championship should be the only task that heeds LeBron's focus."

BOBBY:
"Broke out the thesaurus for that one, didn't you? I'm not impressed with your fancy words. I AM impressed by your points. LeBron is a Hummer. Durant is a Corvette. The Hummer does the dirty work and goes where the Corvette can't get to as easily. LeBron is bigger, more powerful and does what he wants on the floor. Durant is sleeker, faster and more impressive to watch. I'd rather have a Corvette in my driveway. Not really baby-seat friendly, though.

I feel bad for LeBron sometimes because he doesn't deserve the scrutinous (there's your fancy word count) microscope at all. He's constantly nit-picked and dissected. He scores 45 points in Game 6 on the road... but if Boston had actually pulled off a come-from-behind win... SOMEHOW, it would have been LeBron's fault. I hate the fact that he's such a punching bag. He's a lightning rod for criticism and a piñata for journalists everywhere. It's easy to pick on LeBron because of the TV special you mentioned. Come on, people. Get over it. The 'Decision' detractors conveniently leave out the part where James wrote a $2 million check to the Boys and Girls Club that day... all money generated by the TV special. He brought some of the criticism on himself but he didn't ask to have his high school games televised nor did he take his own picture and send it in to Sports Illustrated.

As for KD, there's not much to dislike. He's an everyday guy... minus the millionaire status. He plays video games and goofs off and rides around in a self-described "Scooby Doo van" instead of a Ferrari. Fans can get with that. He's approachable and happy being around fans.

Game 7 is tonight between Boston and Miami. I want Miami to win SO BADLY so I can see these two on the floor together. If the Thunder wins that series, SOMEHOW it will be James' fault. Totally unfair statement, perhaps, but that's what the headlines will read. No matter who wins, I say Thunder wins the championship this year. The Spurs were better than both the Celtics and the Heat and OKC stomped them in 4 straight after San Antonio ripped of 20 in a row. Vs. Boston... Thunder in 5. Vs. Miami... Thunder in 6."

STEVEN:
"It will be a fascinating series to say the least. Forget about the actual team goal of winning a championship. The status of both LeBron and Durant's "brands" will be drastically affected by the outcome of this series ( I'm writing this after the Heat closed out game 7 against Boston). For LeBron, in regards to his "brand," there's absolutely nothing to gain. He's already considered by most to be the world's greatest player. If the Thunder win and he doesn't play overwhelmingly better than Durant (which won't happen), then Durant will wear that crown until they meet again. I can't remember an entire country relishing in the opportunity to hate a team so much when that team had two of the best five players in the league playing for the same side. It's quite surreal living in the singular city that pulls for the "evil" Heat.

But there's an even bigger issue here regarding LeBron. What annoys me the most is how individuals in sports, as well as in many other aspects of life, are anointed some kind of preordained "champion's" treatment before they actually win anything! LeBron walks around with an omnipresent smile on his face, never seems to have a care in the world, and rarely shows emotion on the court, or at least, not to extent that Kobe Bryant, Durant or Westbrook display. If I was him, I would have been so humbled by his finals no-show last year that I would have been in the gym all summer long instead of appearing on radio talk shows, commercials, and showing up to unrelated, inconsequential sporting events. He needs THIS championship more than Durant. He can't count on next year, because OKC isn't going anywhere, Derrick Rose will be healthy, and Indiana will be more experienced. If he doesn't win this year's championship, he will have not only lost out on another title shot, but Durant will usurp his title as "best basketball freak on the planet". It's all on the line for LeBron, and for a guy who's as talents as he is, it's more of a matter of what's inside his chest than anything OKC throws at him."

BOBBY:
"As far as branding goes, both guys are fine. I sent out a tweet a few days ago that said the big winners in the NBA Finals are the people at Nike. LeBron's shoes sell for $170+ and Durant's sell for $95. Just another reason to love KD. They are both international giants in the branding world. You yourself have a KD t-shirt that you proudly wear in Miami, FL. Both brands will survive a loss in the Finals and will not receive too big of a boost in the winning locker room.

I am not sure why there is so much hatred for the Heat. I really don't get it. Just like I don't understand the hatred for LBJ. I disagree with you on the LeBron talk show stuff. There is only so much time you devote to hoops. You have to do something else to get away from your job. Basketball is his job. He needs a vacation in the off season. You can't lock yourself in the gym every day. The first game of the series is tomorrow. I'm pretty bummed I'm not going but that's just how it goes sometimes. Can't do much about that.

I keep thinking about matchups... and I keep coming back to this: NOBODY can check Westbrook. You can't pull Wade off Harden. You can't pull LeBron off KD, because you know he wants to check KD. Battier can't guard Russell. Mike Miller? Mario Chalmers? If Tony Parker and Manu Ginobili couldn't stay in from of RW then nobody will. That means Bosh and Serge have to body up and Perkins will be paired with Joel Anthony. Russell will FEAST because help defense will be non-existent. I think Miami is good enough to win a few games but they won't win the series. I think OKC wins in 6.

I get annoyed when I keep hearing Seattle people complain about how this SHOULD be happening in their city... that OKC "stole" their team. I want to get on a megaphone outside every discontent SuperSonics fans' houses at 3 a.m. and scream at the top of my lungs, "GET OVER IT" and then chuckle into the night. The team isn't here because OKC just wanted it more. It's not our fault your team left. Be mad with your old ownership etc etc. I'd be mad if the Rays left Tampa Bay for Vegas or San Antonio or wherever, but I wouldn't hate their new city because of it. That just annoys me. There was a newspaper headline that was PRINTED the other day that had a picture of the Thunder that read 'Seattle headed to the Finals'. What a joke.

I expect big things this series. As far as it being LeBron's ONLY chance to win a title, that's not true. They'll have a shot the next few years. But, OKC isn't going anywhere for at least 5 yrs. I see that team becoming the early 2000s Lakers/Spurs type dynasty in the West with very few contenders."

STEVEN:
"I believe it will be thunder as well in 6, but I wouldn't be surprised if the Heat win game one tomorrow. They have more experience than the Thunder, and it may take a game for the Thunder to adjust to the pressure of performing under the Finals limelight. It will all be decided tomorrow. Regardless of the outcome, this promises to be one of the most exciting Finals in recent memory."